One of the biggest macroeconomic puzzles today is the lack of wage growth despite an apparent return to full employment in a number of countries. Is it time to throw away the economic models?

An aspect of the US forecast which has not gone according to plan is wage growth. Unemployment has fallen steadily, but while wage growth has picked up from a low base, wages are clearly running at a weaker pace than I forecast a couple of years ago. Our portfolio managers have been gently pressing for an explanation and there are only so many times I can avoid the topic by deflecting to the next payrolls report! Lacklustre wage growth is also not unique to the US. Full-employment economies such as Germany, Sweden, UK and Japan are having similar experiences. 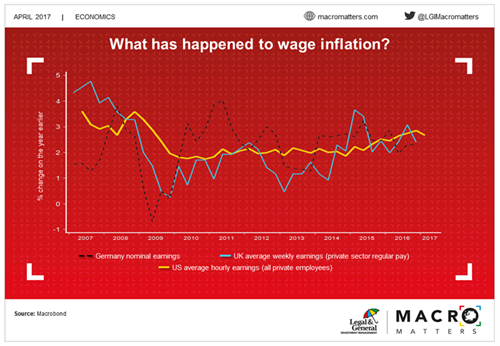 There are a number of theories to explain the apparent breakdown of the Phillips Curve (the relationship between unemployment and wage growth). Let’s briefly explore several below:

1. Wage aggregation problems: There are many different measures of wages, some of them have been held down by compositional effects. If the increase in employment is dominated by low-wage jobs combined with an increase in high-wage retirees, this can skew average wage growth down. While some studies find a pronounced effect, the overall evidence is mixed. Even when we look at measures designed to control for these compositional effects, wage pressures remain relatively muted.

2. Inflation mismeasurement: James and John are both fans of this explanation. If inflation is overstated, then real wage gains are understated. While former deputy governor of the Bank of England Charlie Bean found strong evidence in the UK, I have personally asked Ben Bernanke and he doesn’t find the US mismeasurement problem worse than usual.

3. Demographics: Older workers typically display less productivity growth and therefore experience slower real wage growth. Analysis by the NY Fed finds the aging US population has slowed real wage growth by 0.6% since the 1980s, but the effect has levelled off in the 2000s, so does not explain the current weakness in wage growth.

4. Increased automation and technological progress: It is an easy narrative to say the robots are taking the jobs, but the macro data throw up more questions than answers. Job-replacing technology should lead to higher unemployment and higher productivity, but we are seeing the reverse which implies the pace of technological progress might have slowed. Perhaps as Lars has outlined, it is the threat of future automation which is holding back wages.

5. Productivity slowdown: In equilibrium, real wage growth should equal productivity growth. So with relatively stable inflation, if productivity has downshifted, perhaps it is not a surprise that nominal wage gains have been muted. The productivity slowdown debate has focused on technological versus measurement explanations, but recent papers from the Fed suggest that declining business dynamism could be blame. Bank of England Chief Economist Andy Haldane goes even further by hinting at the role of low rates and quantitative easing in keeping companies alive and preventing the creative destruction necessary to enhance productivity.

6. Memory of the crisis: Unemployment worries could be reducing the willingness to quit jobs and search for a higher wage. If the economy turns down, workers might fear that last in is first out. Yet US quit rates have returned to normal levels and the jobs questions in various consumer confidence surveys all suggest workers are not unusually concerned about unemployment.

7. Debt: Deflation makes debt worse and excess debt can exacerbate a downturn. The 1930s show they can be reinforcing. But it is not clear whether debt in a cyclical upswing should impact inflation and wages. In any case, since the financial crisis, US household debt has fallen, although one component, student debt, has risen, is this having an effect on wages? Does it lead to more risk averse behaviour or an increased motivation to generate the income to pay down the debt acquired for the higher educational attainment?

8. Globalisation: Although global trade to world GDP has levelled off in recent years, it has not yet reversed. It is possible that the global output gap (caused by slack in some countries), prevents wages from rising in countries with tight labour markets for fear of a loss of competitiveness and demand shifting elsewhere. But if this were the case, the effect should be more pronounced in the tradeable goods sector, yet the weakness in wage growth seems widespread across the more closed service sector. Of course, immigration could be to blame here and there is more evidence of this effect in Europe with workers from high unemployment countries moving to economies with better job prospects. But despite the Presidential election result, it is not obvious that immigration is a greater factor than historically in keeping US wage pressures in check.

9. Second round effects: James has written about the impact of lower commodity prices on nominal wages. Workers target real wages and our models indicate that wages should pick up in response to higher headline inflation. This theory should be put to the test over the next year.

10. The NAIRU (an acronym for non-accelerating inflation rate of unemployment) refers to a level of unemployment below which wage inflation rises. Perhaps my biggest blunder was to assume the financial crisis would cause some unemployment hysteresis. The rightward shift in the relationship between job openings and unemployment (shown in the Beveridge Curve chart below); supported by an increase in recruitment difficulties (see the NFIB survey), was supposed to be evidence that the NAIRU had risen. Yet with US unemployment dropping to 4.5%, this suggest the NAIRU has if anything declined. Perhaps the digitalization of today’s job searches has changed these relationships and increased the flexibility of labour markets. It has also led to the Fed repeatedly revising down their forecast for long-term unemployment.

11. The shape of the Phillips Curve: A lower NAIRU implies a leftward shift of the Phillips Curve. Alternatively, it might be the case that central banks have been too successful in anchoring inflation expectations. It could take a bigger overheating of the labour market to generate wage pressure, i.e. a flatter Phillips Curve. Another theory is that the Phillips Curve has become kinked. This is effectively Yellen’s pent up wage deflation argument. Wages did not fall as much as they should have done during the crisis and therefore do not need to rise much to attract workers even as the economy gets back to full employment. Eventually, as the pent up wage deflation is absorbed, wages should rise more noticeably. 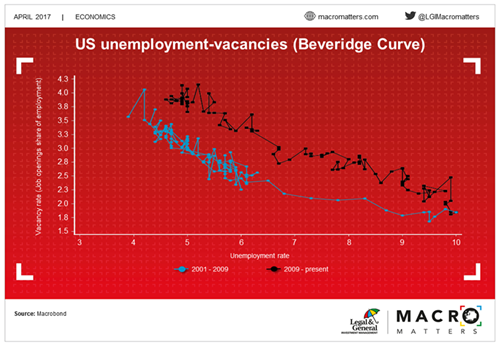 I've attempted to outline many explanations for the lack of wage pressures and while none are conclusive it is likely down to a combination of these factors or perhaps others which economists have yet to identify. There is a lot of uncertainty about how long the puzzle will persist, but I’m not ready to abandon the basic premise that a tightening labour market will eventually lead to stronger wage pressure. I also agree with the findings from James that low headline inflation has held down wage growth in recent quarters, but that this effect is now diminishing. The market is questioning the reflation narrative, but if Congress can eventually deliver on fiscal stimulus just as US wage growth picks up more significantly, I would expect bond yields to be dragged higher by a further move up in the Fed dots.