4% growth without inflation? You Canute be serious

English schoolchildren are brought up with stories of historical Kings and Queens. English history is peppered with larger-than-life characters on the throne: from Alfred the Great all the way through to Elizabeth II.

In 2017, we celebrate the 1000-year anniversary of the coronation of King Canute. This Viking warrior was crowned “King of all England” in 1017 after invading from Denmark. Most of us remember him, if at all, for his ill-fated attempt to hold back the waves.

King Canute was weary hearted; he had reigned for years a score,
Battling, struggling, pushing, fighting, killing much and robbing more;
And he thought upon his actions, walking by the wild sea-shore.

Will the advancing waves obey me, Bishop, if I make the sign?"
Said the Bishop, bowing lowly, "Land and sea, my lord, are thine."
Canute turned towards the ocean—"Back!" he said, "thou foaming brine."

From the sacred shore I stand on, I command thee to retreat;
Venture not, thou stormy rebel, to approach thy master's seat:
Ocean, be thou still! I bid thee come not nearer to my feet!"

But the sullen ocean answered with a louder, deeper roar,
And the rapid waves drew nearer, falling sounding on the shore;
Back the Keeper and the Bishop, back the king and courtiers bore.”

I can’t help but think of King Canute whenever I hear the economic agenda of the new US president. Whereas the ancient English monarch tried and failed to hold back the oceanic tide, Donald Trump is trying (and seems likely to fail) to hold back the demographic tide.

The campaign to “Make America Great Again” harps back to the era of Ronald Reagan for inspiration in driving US growth back to 4% per annum. However, the economic success of Reaganomics owes much to two factors: a sharp reduction in interest rates as inflation fell sharply in the early 1980s, and a powerful demographic tailwind.

As shown in the chart below, that tailwind has almost completely disappeared. When the Gipper was in power, the growth rate in the US labour force peaked at just above 2.5% due to the echo of the postwar baby boom and the rapid rise of female participation in the workforce. Today, that growth rate has shrivelled to below 0.5%. The baby boom has turned to a baby bust and male participation in the labour force has been falling sharply as recently outlined by James. 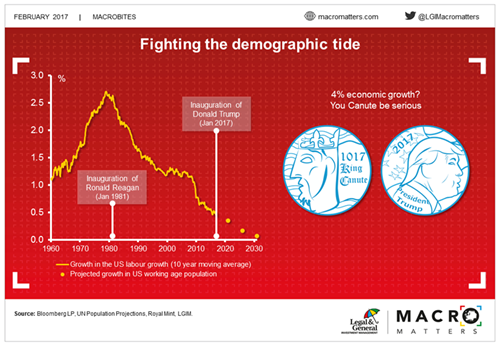 Any sensible economic assessment therefore recognises that trend growth in the US has dropped substantially since the heady days of the Swatch watch and the Filofax. The Federal Reserve, which spends quite a lot of time thinking about these issues, argues that trend growth is just 1.8% per annum. This has very little to do with red tape and high taxes; it has almost entirely explained by demographics.

Pushing for 4% growth when the economy cannot even sustain 2% is a recipe for overheating. If that plan turns from rhetoric to action, we should expect to see inflation pick up as labour shortages increase and capacity pressures build.

We believe that there are clear strategic merits in building inflation protection into portfolios. Given the benign inflation outlook embedded in US fixed income markets and Trump’s policy agenda, we also see significant tactical value in adding to that exposure.

It is hard to see the Federal Reserve standing aside and idly letting inflation take off. This suggests there are also merits in buying the US dollar in anticipation of the accelerated hiking cycle that would surely follow any fiscal splurge, which fits with Tim’s recent observation that the Federal Reserve could turn out to be the biggest obstacle to the reflationary agenda.