Just as football teams have reserve players they can use during the busy Christmas period, the Fed believes the US economy still has a large 'reserve army' of 'discouraged' workers who can keep wages low. We have reservations about this.

We’ve just come through the hectic Christmas football period. Every year, managers complain about the fixture pile-up. I feel like ranting too. My team, Liverpool, had to play three games in just 144 hours while title-rivals Chelsea had 223 hours (great number crunching by the BBC).

Managers are often forced to turn to reserve-team youngsters to prevent their star players from burning out, particularly in the FA cup third round that just took place.

Just as football teams have reserves they can tap into at times of need, US policymakers believe that despite a low unemployment rate, there is still a large Karl Marx ‘reserve army’ of workers available to work.

The ‘participation rate’ (the percentage of people in employment or looking for work) fell sharply after the recession. Fed chair Janet Yellen believes this will prove temporary. She thinks many workers are currently ‘discouraged’ from seeking work. They gave up during the recession when their local factories and shops closed down but will be emailing their CVs again when opportunities improve. 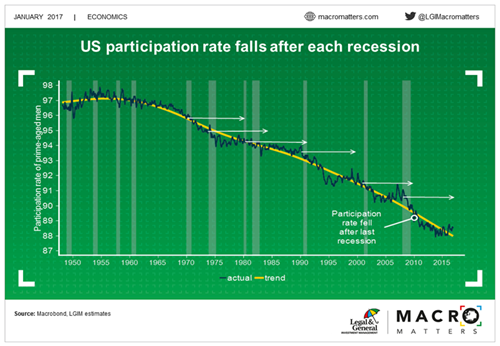 Unfortunately, this argument could have been made after every recession over the past 50 years. But it has always proven wrong. The percentage of people willing to work has fallen after each recession and has never returned to pre-recession peaks (as shown by arrows in the chart above).

That doesn’t mean that there won’t be some cyclical improvement in the number of people willing to work as the economy continues to grow. We have seen an acceleration in the number of people seeking work over the past year. This is consistent with the historical relationship between the participation rate and job vacancies (after taking into account structural trends and a lag). So Yellen is right to argue that some people stop looking for work when the economy slumps, but do return to the labour force when the situation improves.

But the key issue is the extent to which this ‘reserve army’ of discouraged workers will keep a lid on wage inflation. In theory, wages could remain depressed as more people compete for jobs. But in practice, we find ‘discouraged’ workers only return to the workforce once the labour market is tight enough to push up wages.

The final chart below shows that job vacancies tend to lead wage inflation by around 11 months but the participation rate LAGS wages by 3 months. 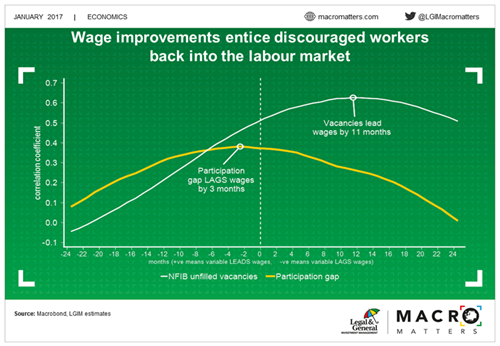 In other words, as firms struggle to recruit workers and job vacancies remain unfilled, they are forced to raise wages. In turn, this improvement in wages entices discouraged workers back into the labour market.

So rather than extending the Goldilocks period of low inflation and steady growth, we think the return of discouraged workers over the past year is a symptom that we’re heading into ‘late cycle’ with wages picking up.

So we have reservations about the Federal Reserve’s interpretation of reserve workers!

This is the third in a series of blogs based on a recent Fundamentals article on the US labour market (“When I’m 64”). The next article will look at the outlook for wage inflation.