Three key risks to markets amid a bullish backdrop

While we’re optimistic about the coming three months, we don’t think valuations and positioning offer much upside. In addition, threats lurk just beyond this time horizon.

During our recent Strategy Week, colleagues from across LGIM discussed how the macro outlook for the next three months is one of the most supportive any of us can remember. Considering the following factors, who wouldn’t be bullish?

Growth should accelerate as vaccinations are rolled out, governments are embarking on massive fiscal handouts, and monetary policy remains ultra-loose. Meanwhile, both the US election and Brexit are now (broadly) behind us.

Having said that, an awful lot of good news is baked into valuations. There’s probably still some upside: we discussed the possibility that credit spreads head towards all-time tights, while we think equities still have room to rally.

But there is now material market downside risk if the macro backdrop hits a road bump – and certainly room for wobbles in sentiment such as the social media-inspired volatility we saw last week. So what are the key risks?

In the very near term, the more infectious virus variants could spread rapidly to parts of the world that have been slow to vaccinate. Or we could see mutations that require new vaccines.

However, both these scenarios seem surmountable, and would probably elicit further monetary and fiscal support for markets.

The more serious threats are probably beyond the next three months. At this time, rapid economic normalisation combined with supply bottlenecks could induce inflation fears, QE tapering talk and rising real yields.

We saw this in 2013, when the original taper tantrum led to real yields shooting up and a sharp correction in credit and equity markets. Indeed, it’s not just the US Federal Reserve that could suddenly reverse course – there’s also a risk that China decides it’s time to tighten the liquidity taps, given their economy has already recovered. 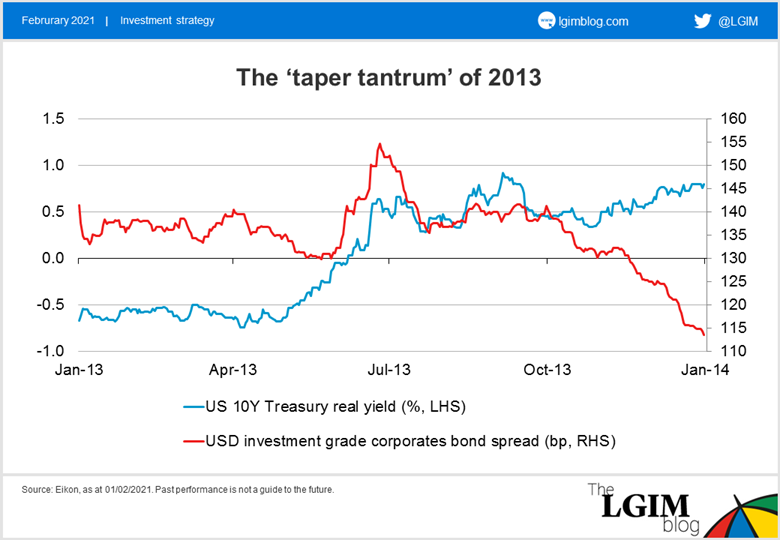 To be fair, this is perfectly normal – policymakers should remove stimulus when it’s not needed. The concern is that investors would suddenly demand a greater risk premium in markets that already appear stretched.

Looking even further ahead, while it appears the US is fully embracing easy fiscal policy and could finally generate some meaningful inflation, we’re not as convinced that the euro area will demonstrate the required dedication.

If fiscal policy is tightened at the first sign of a European economic recovery, the bloc risks accelerating its ‘Japanification’ – monetary policy stuck at the lower bound with low inflation, mountainous debt, an aging population and falling growth potential.

Anyone who has invested in Japan over the past couple of decades knows this is a terrible combination.

So while we’re optimistic about the coming three months, we don’t think valuations and positioning offer much upside. In addition, threats lurk just beyond this time horizon.

The conclusion is that we favour positioning close to neutral overall. Within this, we prefer equities to credit, high yield to investment grade, and government bonds that offer us some protection in a downside scenario. Given often-discussed global structural issues, we would also be minded to push against a significant increase in inflation pricing.