Brexit: What the EU trade deal means for the UK economy

From negative rates to political risk, we discuss how the trade pact, agreed last week, might shape the UK economic and policy outlook.

Four and a half years after voting to leave the EU, on Christmas Eve the UK finally secured a new – and significantly different – trade agreement with its largest trading partner.

In terms of the substance, there weren’t many big surprises in the Trade and Cooperation Agreement, which took effect on 1 January. As expected, the deal is narrow, guaranteeing tariff- and quota-free trade in goods, while offering little on services.

Because leaving the EU’s single market and customs union will still introduce significant trade frictions and non-tariff barriers, some disruption seems inevitable – but much less than in the event of no deal.

Time will tell how much, and in what way, the UK chooses to diverge from EU regulations; the UK will probably face pressure to remain aligned to maintain market access and avoid a more ‘visible’ border with Northern Ireland down the Irish Sea.

At this stage, we have not made a meaningful change to our GDP outlook on the basis of Brexit.

We believe the difference between such a skinny deal and no deal in the coming year or so is relatively small, notwithstanding short-term disruption, of which the agreement has reduced the likelihood and severity.

Moreover, virus and vaccine developments are likely to dominate the growth outlook. The latest restrictions dent an already weakening recovery. While the approval of the AstraZeneca vaccine is clearly good news, it’s difficult to have a high conviction on exactly when ‘normal’ levels of economic activity will return, given the intensity of the new virus strain.

In our view, the deal prevents the Bank of England from taking further emergency measures to prop up the economy in the near term, such as negative interest rates.

Central-bank officials are still working on the practicalities of this policy, should it be needed. The debate on the Monetary Policy Committee remains lively, with Jan Vlieghe, a particularly dovish MPC member, most recently suggesting that he does not see much risk of negative rates being counterproductive.

Still, our base case remains that the BoE avoids adopting this step; over the next 12 months, we see a 30% probability of the monetary guardian taking rates into negative territory.

With regard to fiscal policy, we do not believe the Brexit deal has any direct bearing. The UK has already undertaken one of the most generous discretionary policy responses globally to the pandemic.

We don’t anticipate any fiscal consolidation being announced until much later this year and even then, it is unlikely to take effect until 2022

A deal that does not cover services and non-tariff barriers, but introduces trade frictions and hampers immigration etc., will probably erode the competitiveness of UK businesses and lower the domestic growth potential.

As a reminder, many studies, and the government’s Brexit impact assessment (2018) suggest that in 15 years’ time, a free-trade agreement would reduce the level of GDP by about 5% versus staying in the EU.

Some damage has already been done. The divergence in business investment between 2016 and 2019 is notable, as the chart shows; the UK also saw a larger percentage decline last year. 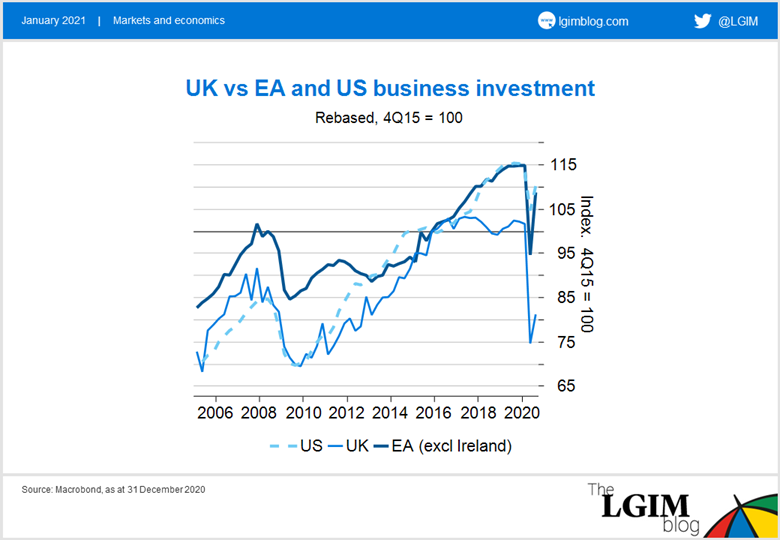 The agreement may herald the end of a good chunk of the risk premium that investors attached to the UK following the Brexit vote. But some instability in the UK’s relationship with the EU remains.

In addition, with the Scottish parliament elections in May, the issue of ‘IndyRef2’ is still very much live; latest polls show a majority in favour of independence and the SNP well ahead of the other parties. 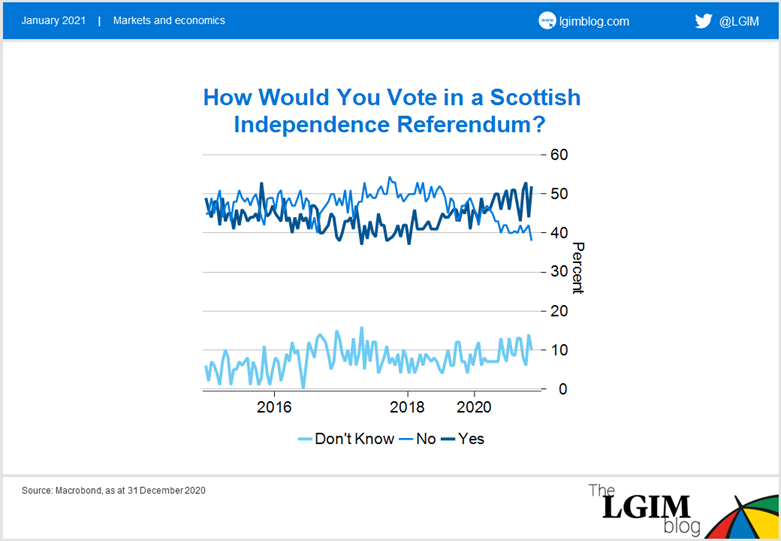 All of that said, now the Brexit transition period is officially over, here’s hoping for a Happy New Year as the UK enters a brave, new post-EU world.