From Trust to Dust

A new survey of global trust in institutions reminds us that populism is here to stay, reinforcing our conviction in our New Political Paradigm theme.

People are angry. You only need to browse the headlines or scroll through social media to see that.

We have been aware of this trend for several years now, and continue to see it manifest in new areas, but we always look for quantitative evidence to support the qualitative and anecdotal observations.

One such source we use is the annual Edelman Trust Barometer, the latest version of which was released last week. Over the years this has been a great source of information for our theme on the rise of populism, the New Political Paradigm. We draw two conclusions from the report.

First, according to the Edelman research, the New Political Paradigm theme is alive and kicking. Despite the resilient economy and strong markets, none of the four types of institution covered by the survey – governments, businesses, non-governmental organisations, and the media – is trusted. For example, 57% of the general population believes the government serves the interest of only the few. This raises the worrying question of how voters will respond in the next economic downturn.

This widespread disaffection – even after several years of populist candidates winning election after election – suggests that the New Political Paradigm still has further to run; it is not just a function of the world’s current political actors.

The second thing that struck me, when reading the Edelman report, was how trusted technology companies are.

It seems from the survey that people have more faith in big tech than one might presume. After all, it has not even been two years since news broke of Facebook’s Cambridge Analytica scandal; as recently as the summer there were reports of regulatory action against the sector.

Despite all this noise, it appears that people don’t really mind about tech’s transgressions – we all still use the same apps, shop online, and use location services on our phones. The trust score of the technology sector has declined a bit from previous years’ highs, but remains higher than for any other sector. 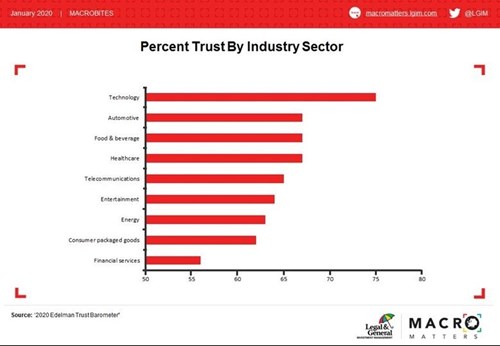 This is a limiting factor for tougher regulation: it’s not as obvious a vote winner as bashing banks, big oil, or tobacco was at other times. We are therefore comfortable being long the tech sector while its fundamentals remain strong.

Overall, the Edelman Trust Barometer is well worth a read and a reminder that a populist policy mix is here to stay, while expectations of a sharp escalation in 'techlash' regulation seem exaggerated.