With 2017 now upon us, it’s clear that a new political paradigm has emerged. The prominence of Brexit, Trump, Le Pen, Corbyn, Alternative for Deutschland and many others is not the result of idiosyncratic national political issues; it reflects a systemic political shift. Given this shift, is it possible for investors to find inner peace?

I used the days between Christmas and New Year to clear my desk, inbox and head. In doing so, I came across an excellent paper called Going to Extremes: politics after Financial Crises 1870-2014 by Funke, Schularick and Trebesch (2015).The paper’s main finding is that policy uncertainty rises strongly after financial crises as government majorities shrink and polarisation rises. 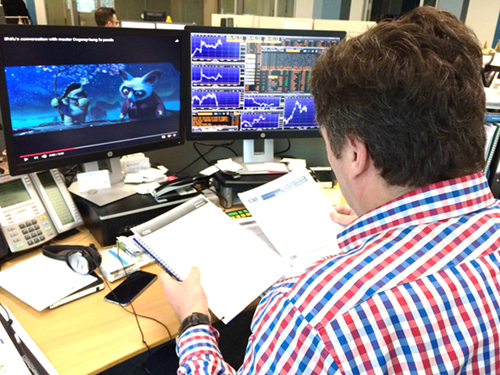 There is clearly a deep feeling of disappointment with the establishment in large groups of society today. Rising income inequality in developed nations is a key driver, while globalisation is seen as depriving the middle classes in developed markets of opportunities and jobs. The resulting anger can be converted into votes.

The new political paradigm of opportunism and isolationism could therefore be here to stay. We believe we are likely to get less fiscal austerity and global trade, alongside more protectionism, political risk, inflation and uncertainty. On top of this, the cyclical backdrop becomes more challenging in 2017, with the US economy approaching the latter stages of its economic cycle.

We would argue that this environment is broadly neutral for bonds but will provide challenges for equities in the coming years, not least as we are moving towards the end of the economic cycle and valuations are already high. Although commodity prices could suffer from weaker global trade, gold and especially oil have historically been the most efficient hedges against geopolitical risks.

As master Oogway teaches Shifu in Kung Fu Panda, the most important conclusion is that we need to let go of the illusion of control. The Trump and Brexit victories highlight that populism can pop up in any country, even in two of the world’s most capitalist countries.

"My friend, the panda will never fulfil his destiny, nor you yours until you let go of the illusion of control" ~Master Oogway

It’s time to expect the unexpected.

As seen with the market reaction to the Trump victory (which only lasted a few days), we expect market reactions to events in the coming year to be short-lived and followed by corrections on a regular basis. This means it becomes even more important to keep portfolios diversified, liquid, and flexible. Medium-term themes still matter but it is crucial to be nimble and actively trade around these themes as they get quickly get priced in (or out) by markets.

Over the long haul, the degree to which rising populism hurts or helps investors will depend on how far it proceeds.

If it simply restores real wages, increases fiscal spending, allows interest rates to come off the zero bound and reduces inequality while restricting some of the trade and labour flows, then the impact on investor portfolios could be reasonably benign.

In contrast, if the populist backlash begins to spiral out of control and morphs into a trade war or even worse, then the outcome could be much uglier than most investors currently expect.

In the meantime, we will be keeping a patient and open mind to see how things unfold so that we can respond quickly, because as Shifu eventually tells Po: