Populism is the link between angry citizens and financial markets. Thinking about possible and, even more importantly, likely solutions to the growing anger goes a long way towards understanding how the new political paradigm could influence markets and portfolios.

The current front runner policy amongst policymakers is ‘more growth’. However, if our estimate is correct, the US economy is already running above its potential growth rate of 1.5%. Overheating the US economy significantly beyond that is indeed likely to achieve the goals of creating more jobs and higher wages; at least temporarily. President Trump's administration in particular appears to be following this approach. The closer to the government you get, the higher the estimate of US trend growth. The Federal Reserve estimates it is 1.8%, the non-partisan Congressional Budget Office comes in at 2.0%, House Republicans estimate 3.0%, Treasury Secretary Steven Mnuchin sees it at "3% annual growth or higher" and Donald Trump has been quoted many times as saying it’s 4%.

"To get the economy back on track, President Trump has outlined a bold plan to...return to 4% annual economic growth" White House.gov"

An alternative solution is ‘more redistribution’. These types of policies are particularly popular with those that diagnose the main source of the issue to be automation and technology: Silicon Valley. The assumption is that automation already has and artificial intelligence (AI) will create great amounts of wealth but with two disruptive side-effects. At the individual level more jobs could be replaced than are created by technology and at the corporate level technology change has often exhibited a 'superstar bias' where the majority of gains accrue to a small number of winners.

This raises the question of finding a new approach to resource allocation; more redistribution to save capitalism. Taking some of the larger pie to provide a Universal Basic Income (UBI) is an idea that has been championed by Elon Musk, Timotheus Höttges (CEO of Deutsche Telekom) and Bernd Leukert (Board member of SAP). The idea sounds less extreme if we think about UBI as a Citizens’ Dividend, a bit like a Sovereign Wealth Fund that gives all citizens a stake in the country’s (technology-driven) prosperity. A second idea that has received a lot of attention recently is to introduce a Robot Tax. This would replace the income tax revenue lost from human workers being replaced by machines and could help finance re-training measures and potentially also a UBI. The list of supporters again includes surprising names like Bill Gates, Frank Appel (CEO of Deutsche Post) and Benoit Hamon (French Presidential candidate).

I would expect these proposals to get more airtime in the years to come, but they are clearly long-term in nature. The aim of their high-profile supporters appears to have been to kick-start a wider discussion of how to deal with the societal implications of rapid progress in automation and AI; rather than as serious short-term policy proposals. 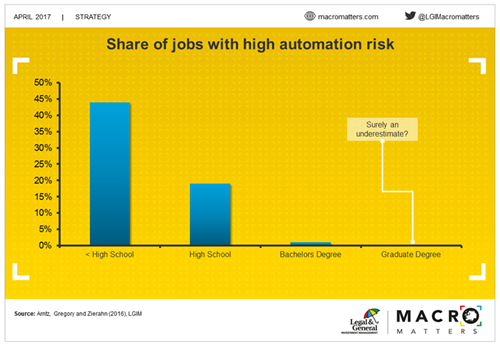 A more immediate solution to the rise of populism that has been cited is ‘more education’. It certainly ticks a lot of boxes. Surveys show that higher education is associated with less risk from globalisation and lower appeal of populist parties. Academic research suggests that the share of jobs that are at high risk of automation declines sharply with increasing level of education. This work is good news for those with graduate degrees, although the stories of AI threatening white-collar jobs like lawyers and doctors is making me wonder whether the chart below may underestimate the risk to university-educated equity strategists like myself. As a general pattern, however, this estimate appears to be borne out by real-world experience. The earnings premium college graduates have enjoyed has continued to widen. 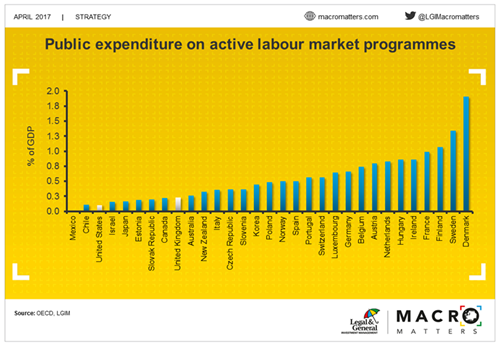 Investments in the social safety net could also help reduce the appeal of populists. The right level of spending on social security is not a question with a right or wrong answer, but a look at which countries spend the least on social security and where populists have had the most success recently shows some correlation. The chart below could also go some way to explaining the surprising lack of social tensions during the euro crisis. Of course, if the French elect Marine Le Pen in a few weeks’ time, this thesis gets shot out of the water.

All of these form part of what we call the ‘populist pick ‘n mix’, the toolbox that establishment politicians can use to protect against a populist threat or populists will use once in power. Of course there is not a 'one-size-fits-all' solution and the precise mix will differ by country; by politician, party and electorate. But we find this a useful starting point in thinking about the policy mix we should expect to see more of in the years ahead and to help structure our thinking about market implications of each component of the pick ‘n mix. More on that and the market implications of the new political paradigm in part three of this blog series. 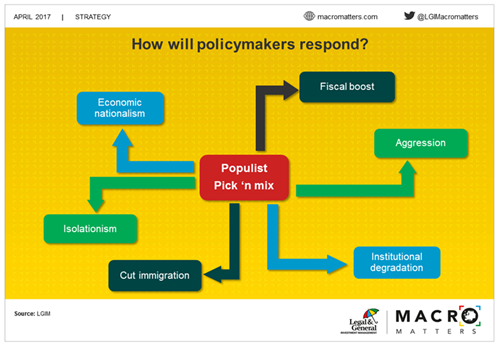