Change is in the air; populist change. This has been a long time coming, but over the past year what seemed like a long-term theme has become a theme that ticks all the boxes of a ‘so what?’ test. The new political paradigm drives markets, creating winners and losers, and could be here to stay.

This is the first in a series of blog posts where I plan to lay out our thoughts behind our medium-term theme ‘new political paradigm’, which Emiel introduced in January. Why are so many people in the West angry, what can and will policymakers do about it and what does this means for financial markets?

The first point to make is that the rise in populism is neither an isolated nor a new phenomenon. Populist parties have been on the rise across most Western democracies: UKIP in the UK, Front National in France, AfD in Germany, ÖFP in Austria, PVV in the Netherlands, 5 Star in Italy, to name only a few. It is also not merely a left-wing or right-wing issue, as the success of both President Trump and Bernie Sanders in the US showed. Sometimes it feels like the rising popularity of non-mainstream parties started with the euro crisis, but it’s important to understand that this trend has been building for much longer. Populist right and left parties have been steadily gaining vote share since the 1960s.

The rise in populism is neither an isolated nor a new phenomenon.

On the surface there are some question marks whether the anger is more than just a feeling. Inequality measures have been signalling declining income inequality and economists would argue that the US economy is at full employment. This throws up the question whether on average things have got better, but perhaps the average hides a wider divergence between winners and losers; a theme that comes up time and again when delving deeper into this topic. US statistics on morbidity make this point well. Morbidity has been declining across Western countries including the US, but a closer look shows that the opposite is true for White Americans.

So why are so many people so angry? What sounds like a simple question has neither a simple nor a single answer. There is a long list of causes discussed in academia, with no decisive conclusion. We’re inclined to think many factors play a role at some level, to differing degrees for different people. Shifting social values and globalisation get much of the blame. The argument is that an excessive and quick shift towards progressive values like gender equality, LGBTQ rights, ethnic diversity, environmental protection and PC culture has been driven by a liberal elite against the will of ordinary people. Globalisation is perhaps best described as something that increases the size of the cake, but divides it up in a way that creates winners and losers. A survey by the Bertelsmann Stiftung suggests that fear of globalisation is a better explanation for the anger than values, but this still comes with a long list of caveats.

Next up is the global financial crisis. On a qualitative level quantitative easing (QE) and bank bailouts have reinforced the existing narrative that the elites look after themselves while ordinary citizens are left to fend for themselves. The notion is that QE was ‘designed by the rich, for the rich’, boosted asset prices rather than wages and that there were no consequences for (corporate/bank) failure. But this is also backed up by data. The World Wealth and Income database shows that the gap between the top 1% and the middle class’s share of wealth has widened significantly since 2009. 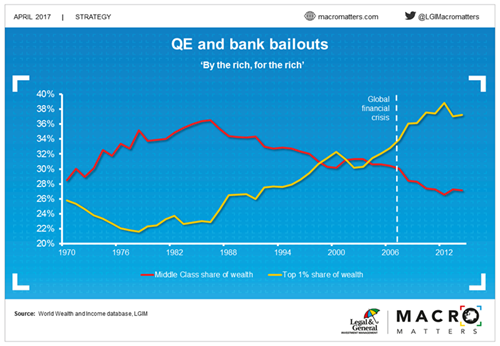 Of course we can’t discuss global inequality without mentioning Branko Milanovic’s Elephant graph. It again makes the point of winners and losers; that real income gains have not been evenly distributed. The EM middle class has done very well, as has the global elite. But the middle class in developed countries have seen their real incomes stagnate, while being bombarded with news of economic growth and prosperity. The data is Branko’s, the art work is my own. 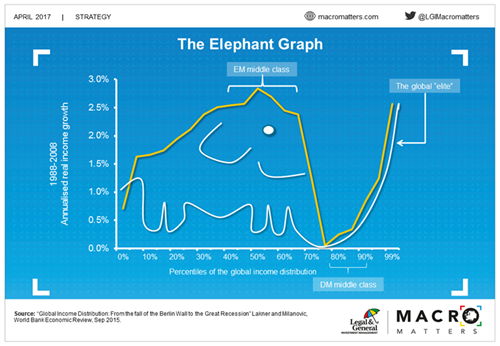 Finally, we come to automation, arguably the most powerful cause, though it tends to get less attention; perhaps because machines are faceless. The decline of American manufacturing played a prominent role in the US election. Donald Trump proclaimed ‘Americans don’t make anything anymore’, but that’s not entirely true. America is manufacturing more than ever, but it’s doing so with fewer and fewer people. Automation is the answer. New research from MIT suggests that automation has had a greater impact on the loss of manufacturing jobs than globalisation. They argue that every robot introduced to the workforce has replaced up to six human jobs and also depressed wages.

And it’s possible that we’re only at the beginning of this trend. We have no special insights into when autonomous vehicles will become the norm, but it seems to be a question of ‘when’ rather than ‘if’. Given that there are around four million truck, bus and taxi drivers in the US a shift to driverless vehicles seems a pretty big change to the labour market. And why stop there? Efforts by Café X and Momentum Machines in the restaurant sector and Amazon’s ‘Amazon Go’ trial in supermarkets are so far too small to matter, but if successful it seems reasonable to assume that such concepts will be adopted by mainstream retailers and rolled out very broadly in the not too distant future. 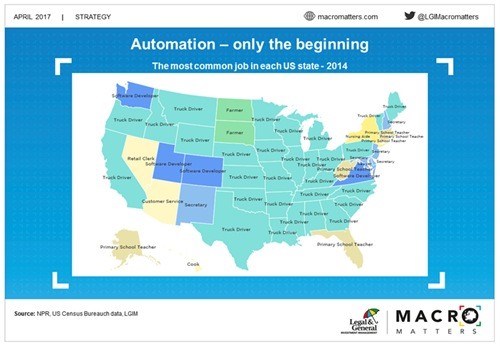 This would make for cheaper latte macchiato, burgers and supermarket shopping, but also suggests that the new political paradigm could get stronger rather than weaker in the years ahead. All the more reason to look into possible solutions and likely responses from policymakers in another blog.