The eternal truth in financial crises is that debt is the heart of the problem. Without debt, there is no leverage and no forced selling. Warning lights are now flashing across emerging markets. Timing the next debt crisis is extraordinarily difficult, but we know where to look.

Inspired by the Bank of International Settlements, we have put together some traffic lights for debt indicators across the major economies. There are two components: 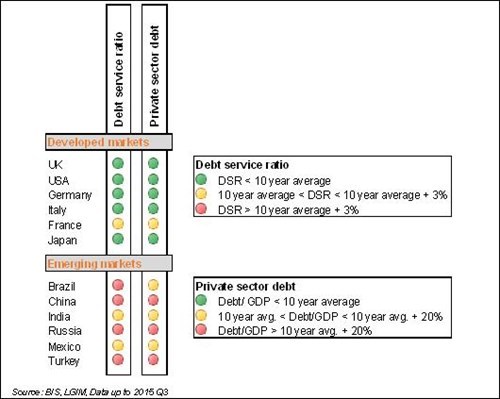 Stop or go? A green light in developed economies ...

There are few concerns in developed economies. The private sector has used the last few years to steadily deleverage. That process has been assisted by government policy whereby interest rates have been kept ultra-low and debt has (selectively) been transferred from the private sector to public sector balance sheet.

... but red lights across emerging markets

Here the story is much more concerning. Almost wherever we look (with the notable exception of India), debt burdens have spiralled higher and debt service ratios are rising rapidly. There is a significant publication lag in this data, but the recent news from China (in particular) suggests that the problem is getting worse, not better, since the turn of the year.

Timing the next debt crisis is extraordinarily difficult, but we have a very good idea where to be looking.