Hot forward-looking economic indicators will eventually cool. But we believe this will signal a maturing cycle, not the beginning of a recession.

Each of these forward-looking economic indicators is around its multi-decade high, so naturally it won’t be long before our inboxes fill with opinions and analysis on what it means when PMIs start to fall.

To stay one step ahead of the market, our short answer is that there are plenty of things to worry about, but PMIs declining from post-recession peaks is not one of them.

Indeed, our economists expect PMIs to stay high before starting to trail off into the mid to high 50s over the next six months. This path would be consistent with our latest economic forecasts.

Turning to markets, our research suggests that equities do tend to take a brief pause, but then generally do well, after PMI peaks. It may be tempting to think that because equities rallied with rising PMIs, they may give up some of their gains as PMIs decline. Yet that is not what has typically happened in the past.

The simple rule of thumb is that equities do best when growth accelerates (e.g. PMIs move from a trough reading to 50 and then to a peak), are fine when growth is steady and positive, but sell off when the cycle turns into a recession (e.g. PMIs trough from 50).

PMIs declining from post-recession peaks are typically a sign of the economic cycle maturing, rather than a signal of imminent recession, so it’s not surprising that the phase between the peak and 50 has been associated with fairly average equity returns.

The chart below focuses on the period around PMI peaks, using the US ISM survey, with data going back to the 1950s. We see that there’s no obvious inflection point visible around ISM peaks, although returns after peaks have on average been more moderate. 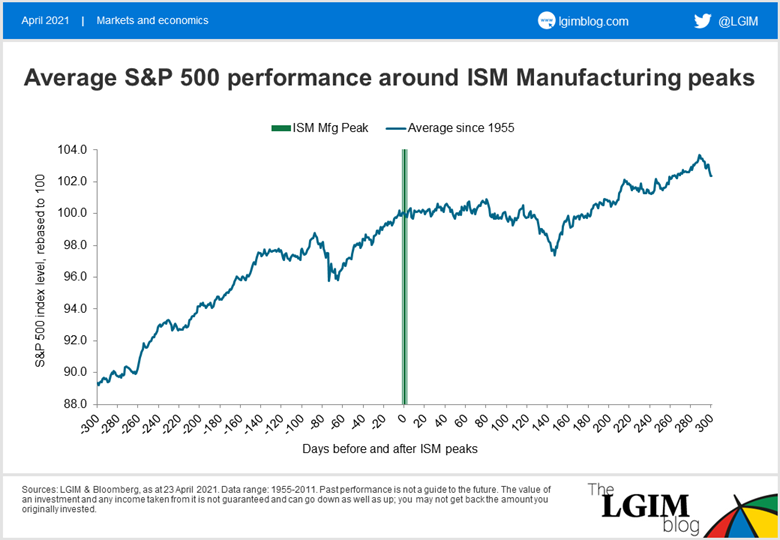 A good precedent to have in mind is the 2003-07 cycle. The ISM peaked about a year after the market low (in June 2004) and then steadily drifted lower over the remainder of the cycle, which was a pretty good time for risky assets until the next recession.

That said, a turn in PMIs would likely be more problematic for cyclical equities. Cyclicals are (relative to the broader market) very sensitive to PMI momentum, so a decline in PMIs after a record-breaking rally and bullish sentiment in such stocks would not bode well for them, although it may be premature to position for this at present.