challenges, but few bring as much scrutiny as taking over as president of the European Central Bank (ECB).

What do Mario Draghi and I have in common? We both started our jobs in November 2011: as he strolled down the streets of Frankfurt am Main, I stepped through the revolving doors of One Coleman Street. Like a person you see on the tube nearly every day, Draghi has coloured the backdrop to my LGIM career so far.

It has been quite a ride on Draghi’s “Whatever it takes” rollercoaster: he has delivered 125-150 basis points of rate cuts and added substantially to our lexicon of acronyms with QE, LTROs, TLTROs and OMT. With this unprecedented range of easing measures, he leaves office with unemployment 3% lower, GDP growth a bit stronger, and government deficits in better shape. 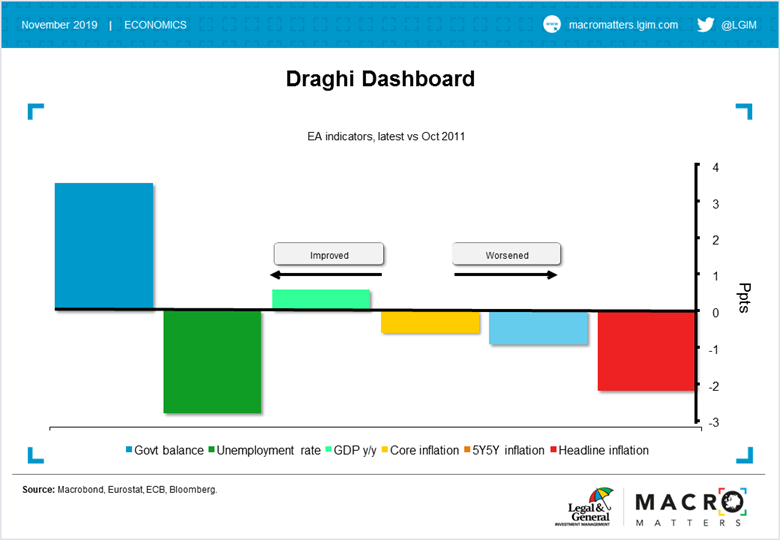 Draghi and the ECB: whatever he could…

Nevertheless, core inflation is nearly 1% lower, headline inflation is a huge 2% lower, and inflation expectations remain weak. The euro survives despite sovereign debt concerns, and euro-scepticism – particularly from Draghi’s home country – has faded (overall support for the euro has recovered back to around 65%, from barely above 50% just three years ago). Despite his “whatever it takes” statement, the reality has been closer to “whatever he could”. 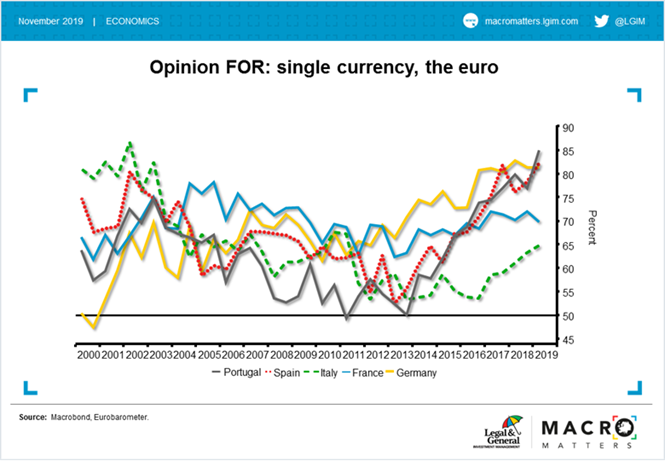 First day in the new job

So what will be on the top of Christine Lagarde’s ‘to do’ list? The ECB’s inflation target is “close to but below 2%”, so there is plenty of scope for improvement. Stronger growth will certainly help, but most of the power to stimulate the economy lies with national governments, so Lagarde will have to pick up where Draghi left off in terms of pushing for more active fiscal policy. More investment will be required across the Eurozone to boost productivity and future growth potential, and keeping borrowing costs low for both the private and public sector would make this investment more attractive. Just how low rates can go remains a bone of contention; after the dissent at the ECB’s September meeting, Lagarde will have some bridges to mend.

Yet Lagarde is no stranger to tough decisions: as France’s finance minister through the financial crisis, she understands what it takes and has strong connections in policy circles. Whether she will be able to obtain consensus for further policy easing remains to be seen, though; while rate cuts would appear to be the path of least resistance, we still think that further quantitative easing is not yet off the table. Nevertheless, we do not anticipate further easing over the coming months, following the substantial measures announced in September.

Having been asked whether he would give Lagarde any advice, Draghi neatly sidestepped, saying that she would know what to do. The financial industry will be watching closely to see if she will be doing whatever it takes, or whether she too will have to settle for whatever she can.

Given the backdrop of the euro area financial crisis, with some countries “too big to fail, too big to bail”, EU peripheral debt has been an exciting place to invest in recent years. High volatility and opportunities mean it’s been its own distinct asset class with different risk and rewards to other debt.

With Draghi’s final flourish of easing, that period is at an end for now. The ECB’s bond-buying machine has finally driven Italian spreads down to levels similar to other BBB credit, while Spain and Portugal are trading at a premium to their corporate equivalents. But given debt levels in Italy and elsewhere, we would still expect future Eurozone flare-ups and the associated opportunities they create.