Life can only be understood backwards, but it must be lived

December is a good time to slow down (just a little) and take stock. 2016 has certainly been a year for the political history books. As we approach 2017, the main thread running through most of our thoughts is how we adapt to these new changes and move forward.

The three biggest surprises have been Leicester City winning the 2015/16 Premier League, the Brexit vote and Donald Trump being elected the 45th President of the United States. Ladbrokes states that if someone had made a £1 accumulator bet on all three events to happen, they would be sitting on £4,530,906 today. In other words, you could have turned £1 into £4.5 million. I don't think many people had this sequence of events in their 2016 outlook.

Given these events, especially the last two, it’s surprising in a way that markets are where they are. Most equity markets are comfortably higher, credit spreads have tightened and bond yields are little changed. At the very least, we got the asset returns more or less right in our outlook for last year and there was plenty to blog about throughout the year(!) 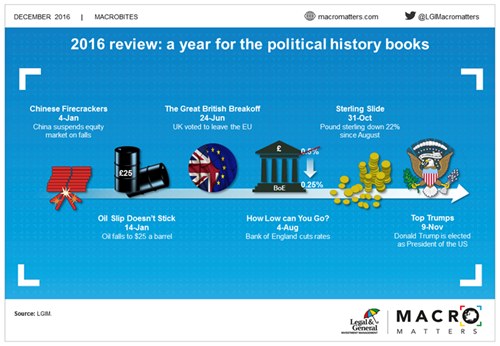 We should have known that 2016 would be hard to forget on the first morning back in the office after the New Year. From a Chinese equity freefall in the first few days of the  year, to oil tanking to $25 in January, it didn’t seem like the most auspicious start. But by March the majority of the equity losses were forgotten and oil eventually established a trading range of approximately $40 - $50, helping to rein in high yield spreads again.

We were not only able to respond quickly in our portfolios, but also to our clients…which is a small victory in itself

The team have been kept on their toes this year with the Brexit vote and a Trump victory. While these were unexpected results, we were able to respond quickly in our portfolios - in both cases we adjusted the portfolios in the middle of the election night as our portfolio managers and traders spent all nights glued to their screens. We have also been able to communicate in a timely way with our clients, making sure that they were kept informed every step of the way, which is a small victory in itself.

Despite the ups and downs in the markets this year, the team have had a few highs that are worth celebrating. It’s been a year of broadening our reach - we launched some new funds catering to our international clients, and launched this blog which has been over a year in the making, to allow us to communicate our thoughts with you more seamlessly. And finally, we have an award to add to the mantel piece. 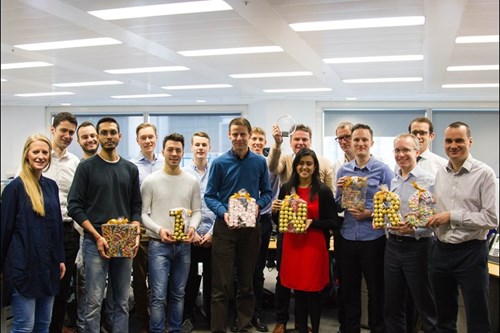 That being said, there’s no time to waste and we’ve been hard at work thinking about the next year.

So what’s keeping me awake at night?

The economy is approaching 'late cycle'. This means the cyclical tailwind for risk assets is changing into a whirlwind (one day it’s blowing in your way, the next day it’s firmly in your face). For instance, Sharpe ratios of equities become less predictable and the world starts to pay more attention to systemic issues. On top of the gigantic debt build-up in emerging markets we also have to face a new political paradigm of opportunism and isolationism which has led to the vote for Brexit and the Trump victory. We're keeping an eye out for the next stages of this trend playing out in other countries and have been watching the results from the referendum in Italy and the presidential elections in Austria closely.

The long-term implications are daunting. We’re getting more isolationism, xenophobia and opportunism which could lead to more political risk, social unrest and protest, and uncertainty. We’re basically moving towards a more distrusting world, which could see countries increasingly focusing on security and defence, most notably cyber security….This is the new world that we will need to navigate.

Clearly it’s all too easy to get carried away, so in my next post, I’ll be sharing the team’s thoughts on 2017, posed as seven key questions to help us navigate the coming year.