The immediate economic outlook may have darkened, but there are reasons to believe 2021 could be a strong year for global growth.

The primary downside risk we saw for the economy – further waves of COVID-19 leading to renewed lockdowns – has sadly materialised across many parts of the northern hemisphere.

While we don’t expect the impact on the economy to be as severe as it was during the spring, the measures taken by European governments during the autumn and winter are likely to lead to another significant fall in output following the strong summer rebound.

The US has been slower to respond and, as pressures build on hospitals, the approach taken to tackle the virus across different states is likely to toughen; Los Angeles has just issued a stay-at-home order, for example. The US probably had sufficient momentum into November to avoid an outright contraction in the fourth quarter, but the holiday season will now be far from normal.

After rapid progress to reduce unemployment, the improvement in the labour market could stall or even reverse heading into 2021. The US election outcome has reduced the chance of a radical shift to sustained fiscal expansion, but we still expect some additional support to emerge in the coming months in response to the deteriorating virus news. 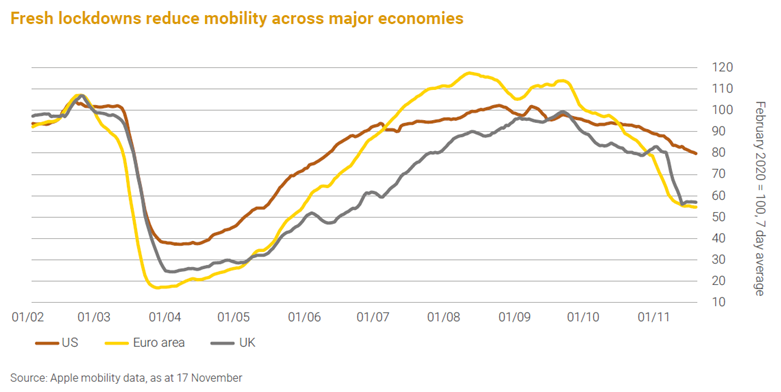 Offsetting the gloom are several positive developments. First, China has largely eradicated the virus and so has a much greater chance of successfully deploying track, trace and testing programmes to prevent future outbreaks.

Second, we have seen how quickly activity can recover once restrictions are eased. But most crucially, progress on developing safe and effective vaccines has continued, bringing forward a potential return to normality – or something approaching that condition – by one or two quarters.

We still await more comprehensive data, and there will be logistical and public-relations battles ahead before the world can reach herd immunity – or at least reduce the threat of the virus – to allow most people to resume normal activity.

Yet although the precise timeline remains uncertain, we expect more widespread distribution of vaccines to begin in the spring. As restrictions ease from the winter and confidence builds that the end is in sight, activity could rebound strongly through the course of 2021.

Aiding the recovery will be exceptionally loose monetary policy as central banks focus on preventing inflation from dipping further below target. There is also an understanding from fiscal authorities that next year is not the time to address the large budget deficits caused by the response to the pandemic.

Bringing all this together, our central view expects global GDP to finish 2021 around 3% below its pre-virus trend, but there remains huge uncertainty around this outcome, with risks skewed to the downside should a vaccine be delayed.

Beyond this horizon, there is a concern the pandemic is causing lasting economic damage through capital stock obsolescence and belief scarring, which leads to increased saving and caution around future investment. However, it is also possible to see the potential for creative destruction and increased dynamism, accelerating change and boosting productivity.