The battle to be the next ECB president

Forget the debates about nationality – the next ECB chief’s most important quality will be their ability to keep the show on the road in the next crisis. 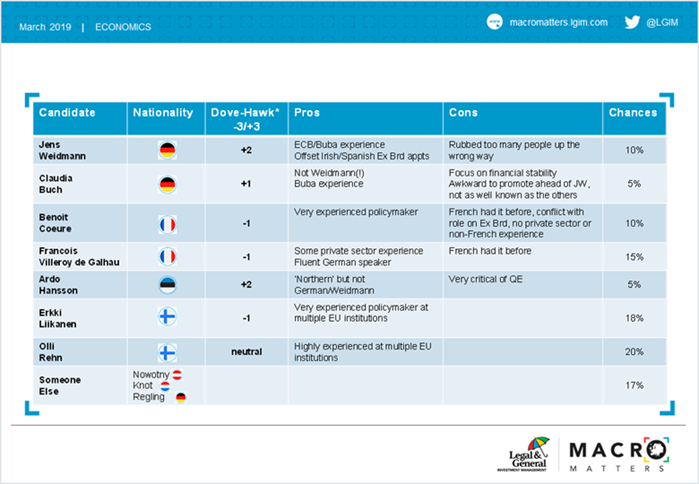 Mario Draghi has helped to steer the euro area economy through existential crisis since becoming president of the European Central Bank in 2011. It’s no exaggeration to call him a titan in the world of monetary policy.

The Italian economist is due to step down in October, so investors are understandably gripped by the question of who will replace the man who has dominated markets by deftly navigating a sovereign debt crisis, steering the ECB through the Grexit saga and chartering new territory in the form of negative rates.

Because EU country leaders will ultimately choose Draghi’s replacement, after their finance ministers recommend their preferred candidate, the decision is deeply political – expect a lot of manoeuvring among the larger nations.

And because there are a number of top EU jobs up for renewal this year, we can’t look at one without the others. For example, it’s seen as crucial for the ECB president and head of the European Commission to be of different nationalities.

The chart below details the main runners and riders, alongside my estimates for their chances of attaining the key economic role; you can see that the race remains wide open at this stage.

Much will hinge on talks between the French president and German Chancellor. Emmanuel Macron wants deeper fiscal integration in the euro area. He knows his chances of getting this are slim, so likely feels the need for a ‘creative’ ECB that will continue to support the bloc.

For her part, Angela Merkel reportedly favours installing a German EU Commission chief, instead of pushing for a controversial candidate to run the central bank. By “controversial”, read Bundesbank chief Jens Weidmann, an uber-hawk who is the hard man of euro-area monetary policy.

One of the ECB’s pragmatic Finns, such as Erkki Liikanen or Olli Rehn, would probably be acceptable to Macron if he had to forgo putting a Frenchman (or woman, but no strong contenders have emerged) at the head of the institution. Both Liikanen and Rehn are very experienced and highly regarded.

The ECB’s toolkit is much bigger now than before the central bank was forced to deal with insolvent nations and broken bond markets. It is also a consensus-building institution: even Draghi could not have magicked up the crisis-fighting tools overnight; he had to gain buy-in from his fellow policy makers.

So with the possible exception of Weidmann, none of the candidates are likely to change my economic forecasts or rate expectations for the short term.

We continue to anticipate the first, albeit small i.e. only 0.15%, rate increase in 2020 as the ECB gradually tries to normalise policy. Indeed, within the Asset Allocation team we have recently raised our stance on the euro to neutral, from negative, which was a tactical and medium-term view we held since 2017.

The next ECB president will matter most when there is a crisis. Regardless of their nationality, only then will we learn whether they are blessed with Draghi’s ability to keep the economy on an even keel*.

*If you have noticed the sailing metaphors you’d be forgiven for thinking I’m a fan. Nothing could be further from the truth – I get very sea sick, so very much appreciate a good captain in stormy waters!