Coronavirus, US primaries and the market outlook

Despite the supportive macro backdrop, selling into strength appears a sensible policy, underlined by the risks posed by two significant wildcards.

At our first strategy week of 2020, LGIM’s investment teams discussed the extent to which the improved macroeconomic backdrop was already factored in to valuations – and what could shake up the current market pricing.

Perhaps unsurprisingly, given the large number of headlines generated on both issues, we identified the novel coronavirus outbreak and US Democratic primaries as two wildcards that could have significant implications for the market outlook.

On the overall macro environment, we agreed that the risk of a global recession appears to have fallen, following a ceasefire in the US-China trade war and more clarity around Brexit. And we noted that with inflation remaining subdued, global central bankers can keep the liquidity taps turned firmly on.

The chart below shows how, within this context, our economists’ median forecasts place world GDP safely above the 2% recession mark. 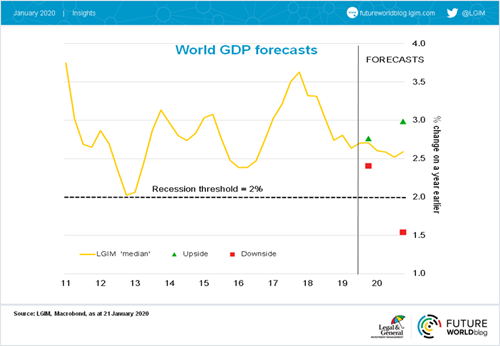 It makes sense, therefore, that credit spreads are close to historic tights and many equity markets remain within kissing distance of record highs, adding to the gains of a stellar 2019, even amid the recent deterioration in sentiment.

Yet one key question with which we and other investors need to grapple, and is not yet incorporated into our forecasts, is how much of a hit to growth could the coronavirus deliver?

While we are all shocked by the terrible human cost of the virus, the economic impact is a function of travel and work disruptions implemented to contain the spread of the disease.

Back in 2003, the slowdown in Chinese growth due to the SARS outbreak was quickly reversed within a quarter. Of course, since then China’s importance to global supply chains has growth significantly, as has the amount of debt owed by domestic corporates. So the situation needs to be monitored very closely.

All eyes on Iowa

As noted in our 2020 CIO outlook, the US presidential election is also likely to move markets in numerous ways.

With the Democratic primaries kicking off in Iowa on 3 February, there is increasing investor focus on the process to pick a candidate to run against Donald Trump. Momentum for a progressive candidate who is perceived as less friendly to markets, such as Elizabeth Warren or Bernie Sanders, could spur a spike in volatility.

This is another area where we are in wait-and-see mode. And this is only the beginning of the primary season, which reaches a crescendo in on ‘Super Tuesday’ in March before the nominee is officially chosen in June.

Elsewhere, we continue to see the threat of rising US inflation as being under-priced. Even though we do not anticipate a sudden uptick in consumer prices, we think markets could react to even a small increase. We also think this acts as a hedge of our exposure to risk assets which could underperform should inflation increase, tying the hands of central banks. We therefore hold exposure to US inflation in a number of portfolios, including global credit and multi asset. 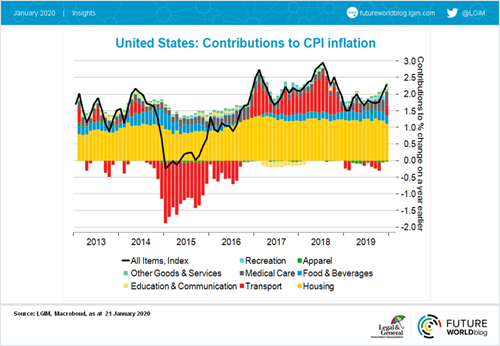 Across LGIM’s investment teams, we are happy to be neutral or modestly overweight risk, which suggests limited room for upside. But given the lateness of the cycle, regardless of the two wildcards, we are likely to become increasingly nervous should the market rally begin again in earnest.