Another dispassionate look at India and it's economic outloo

India faces short-term headwinds, as we laid out in our recent blog post. Modi’s surprise decision in November to replace 85% of India’s currency in circulation is having a marked impact on growth. Two and a half months later cash in circulation is still 40% below pre-reform levels, the service PMI remains in contractionary territory and two-wheeler sales are down 38%. In addition, India’s banking sector is undercapitalised which weighs heavily on credit and investment. 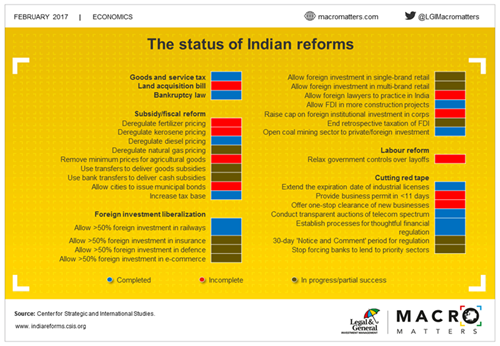 On the other hand, India’s medium-term prospects remain bright. To begin with, India is a large closed economy with an underdeveloped manufacturing sector that should be relatively immune to Trump’s protectionist agenda. As a natural rival to China it is also on the right side of Trump’s geopolitical agenda.

Secondly, with the exception of public debt, India has no macro imbalances to speak off — the current account balance is close to zero and external debt is low and falling. Fiscal consolidation remains broadly on track with a FY18 budget that prioritises capital spending. Monetary policy adheres to international best practices with an independent central bank that targets 4% inflation.

Finally, progress on structural reform has been impressive as shown in the above table. India adopted a goods and service tax, introduced a bankruptcy law, liberalised FDI, and cut fuel subsidies. Modi’s reform zeal was displayed again with the recent currency reform. While far from perfect — the impact on growth was probably underestimated and less black market money than hoped was eliminated — the reform’s medium-term impact on tax collections should be positive.

In all, India faces short-term headwinds, but sound fundamentals and a strong reform agenda make it a convincing long-term investment in our view.