All roads lead to Rome

With the country saddled with high debt and unstable politics, Italian debt markets have persistently underperformed European averages for the last couple of years. This pessimistic narrative is definitely seductive but we believe it is dangerous to get sucked into an excessively negative outlook. The debt problems are chronic rather than acute, the politics are not obviously more unstable than usual, the ECB is being flexible with asset purchases, and the return potential could be greater than it first appears.

The European economy has been looking surprisingly perky recently. Over the last four quarters, the Eurozone has grown by 2.2% (matching that seen in the US, and far outstripping the UK). More meaningfully, unemployment has been steadily subsiding since mid-2013. The deep economic scars from two financial crises in quick succession (the global crisis in 2008/09 followed by the European sovereign crisis in 2012/13) are healing.

However, without fiscal union, we believe the European monetary union is always likely to be more vulnerable to shocks than other parts of the world. Yet we need to consider not only the health of the aggregate Eurozone economy, but also that of the weaker links in the chain.

Among the large economies, Italy has long been one of the countries in that unenviable position. Saddled with high debt and unstable politics, the country has debt markets that have persistently underperformed European averages for the last couple of years.

The pessimistic narrative is definitely seductive. According to this narrative, there are five big reasons to worry:

Debt: The country’s high government debt burden makes it vulnerable in the next downturn. Italian public debt stands at 133% of GDP. The constant need to roll over that debt makes them especially vulnerable to an abrupt deterioration in investor sentiment.

Politics: Italy needs to have a general election by May 2018. Anti-European parties are lurking on both the left and the right with the Five Star Movement and the Lega Nord threatening to tear up Italy’s membership of the single currency. Those radical platforms appeal given that Italy is the most Eurosceptic of the large members of the Eurozone.

The ECB: The ECB’s asset purchase programme is likely to wind down in 2018. That risks a 'taper tantrum' in Europe’s largest bond market.

(Lack of) growth: Since the establishment of the single currency, Italy has barely grown. Euro notes and coins were introduced in the first quarter of 2002. Since then, Italy has had annualised GDP growth of just 0.05%.

Pricing: Italian government bonds yield the same as US Treasuries. Why would you want to own that risk at such low interest rates? With yields at just over 2%, you’re not giving up much by avoiding the asset class.

I’m not trying to talk down any of those concerns. But it is dangerous to get sucked into an excessively negative narrative. Let's address each of the concerns in turn… 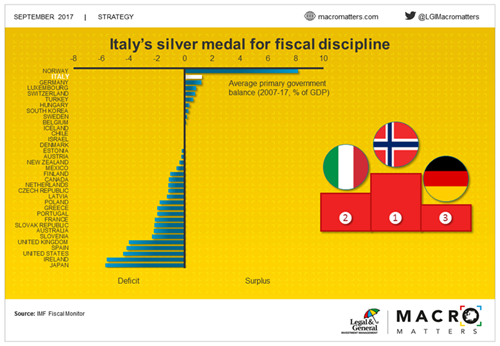 The basic condition for debt sustainability in that environment is that nominal interest rates are below nominal GDP growth. Italy pays 2.7% on its stock of debt. However 15% of the debt stock is now held by the Banca d’Italia. That part of the debt stock effectively pays the rate of interest on the Banca d’Italia’s liabilities (i.e. -0.4%). Adjusting for that effect, the genuine effective interest rate is around 2.3%. Moreover, that debt stock is being refinanced at an average interest rate of just 0.3%. With a consistent primary surplus and ultra-low interest rates, it is hard to argue that Italy’s debt burden is particularly worrying. 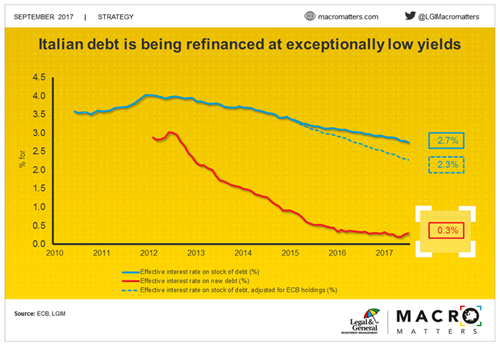 The politics are fragmented, but not obviously more unstable than usual. The general election in 2018 is a three-way tussle between the centre-left coalition, the centre-right coalition and the Five Star Movement (5SM). There is no evidence of a surge for the radical left. Throughout 2017, 5SM’s support has been drifting lower in favour of more mainstream alternatives. Furthermore Italy’s Euroscepticism is lower than generally thought. When Eurozone notes and coins were introduced in 2002, Italy was the most pro-European of the big four Eurozone economies with 80% of Italians in in favour of the single currency. That number has dwindled to 58%, but Spain offers a good lesson in how quickly this apathy can turn around. Public opinion there has proven to be extremely pro-cyclical: as the economy recovered, so support for the euro recovered rapidly. We might expect exactly the same dynamic in Italy. 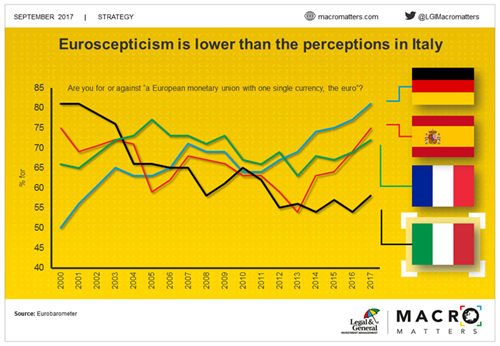 We fully expect the ECB to taper their asset purchases in 2018 (starting in January), but the devil is likely to be in the detail. Mario Draghi always emphasises the ECB’s flexibility with respect to the “size, composition and duration” of their asset purchase programme. In recent months, the flexibility with respect to 'composition' has been increasingly apparent. The ECB is rapidly running out of AAA-rated bonds to buy. Instead, it is buying increasing quantities of Spanish and Italian debt to compensate. Those deviations from the ECB’s capital key are likely to get bigger as the scarcity problems in highly-rated securities worsen next year. 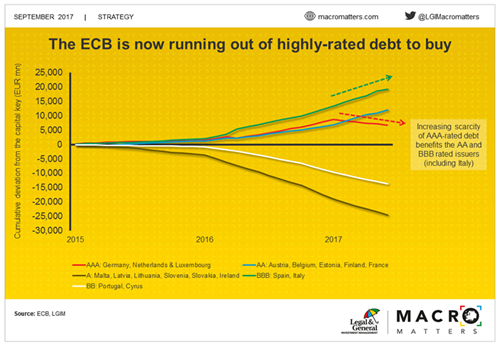 The lack of growth is probably the single most concerning factor in the Italian outlook. Supply-side reform to make the economy more efficient is disappointingly slow. However, Italy is participating in the broader European recovery. Growth of 1.5% over the last four quarters is not going to set many hearts racing, but it is proving sufficient to put downward pressure on unemployment.

Italian yields are low, but we need to remember that the Italian curve is steep and the money market rates are meaningfully below zero in Europe. That implies a double kicker when buying Italian bonds. If nothing changes over the next twelve months (i.e. if the entire structure of interest rates is unchanged), sterling investors could earn 4.7% on 10-year Italian debt exposure. That is over 300bps above equivalent exposure in the US. Italian exposure is undoubtedly more risky, but we believe it is nonsensical to argue that there is no additional compensation for that risk. 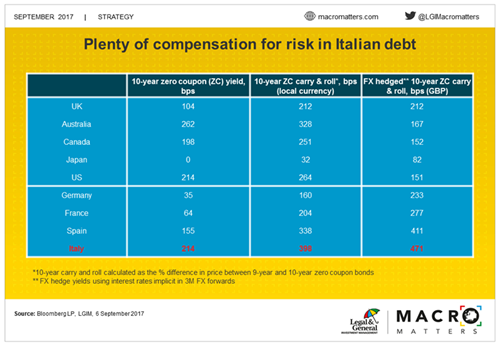