Without immigration, Europe's population is set to decline by around 10% over the next three decades. Japan's experience serves as a warning about the difficulties of managing public finances and expanding corporate revenues against that backdrop. So is Europe's situation sustainable?

In the words of John F Kennedy, the late US president, the USA is a “nation of immigrants”. Since the early days of Jamestown in 1607, North America has welcomed wave after wave of newcomers. Fast forward 400 years, and today’s America is still a relatively open and tolerant society: 15% of the population were born overseas. As a result perhaps, Americans have a pretty relaxed attitude on the subject with over one in three describing immigration as having a “very or fairly positive” impact on their country. 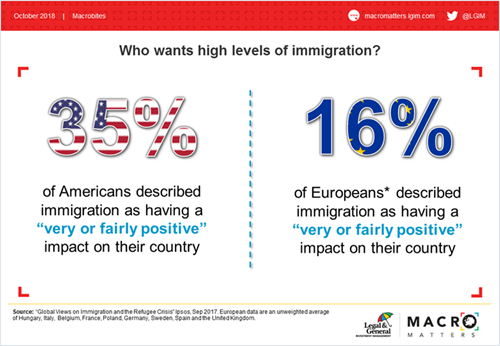 In contrast, Europe is relatively closed to outsiders. 11% of European residents were born overseas, but that number drops to just 7% if we discount intra-EU migrants (Germans living in Spain, Poles living in Britain etc). Attitudes are also tougher, with only one in six Europeans willing to say that immigration is a good thing.

Europeans’ attitudes to immigration seem to be shaped by ambivalence to refugees and asylum seekers. Just 0.6% of the European population fall into this category, but that proportion has surged since 2010 with instability in North Africa (Libya, Egypt), the Middle East (Syria, Yemen) and Eastern Europe (Ukraine, Georgia).

Parties across the continent have jumped on the anti-immigration bandwagon: the National Front in France, the Lega in Italy, the AfD in Italy, UKIP in Britain, Fidesz in Hungary, Law and Justice in Poland and the Sweden Democrats in … err …. Sweden. As recently discussed by Emiel, the issue acts as a catalyst for an expression of broader discontent about socioeconomic conditions and the European Union itself.

The irony of this situation is that, unlike the US, Europe desperately needs immigrants. Without them, the EU’s population is projected to fall by nearly 10% over the next 30 years. Among advanced economies, that is the type of population decline only seen in Japan.

The lesson of Japan is that managing the burden of public debt could prove exceptionally challenging if it falls on the shoulders of a steadily shrinking workforce. Maintaining growth in domestic demand (that underpins the revenue of the corporate sector) will prove similarly difficult.

From an economic perspective Europe needs immigrants. But from a political perspective, Europe is increasingly turning its back on immigrants. It’s not for me to judge whether that is normatively 'right' or 'wrong', but I can highlight the potential consequences. To only slightly misquote the Vapors, if Europe carries on down this path: “It’s turning Japanese, I think it’s turning Japanese, I really think so".

For more on this topic, please see our recent Long-term Thinking article on EU migration.