Roll up, roll up ... behold the amazing, disappearing bund market.

German debt is shrinking rapidly as a share of GDP. If we wind the clock forwards, there is a very plausible scenario in which the market almost entirely disappears over the next couple of decades. That poses profound challenges for a European financial system lacking an alternative safe asset.

According to the Maastricht Treaty (officially known as the Treaty on European Union), EU member states have an obligation to target gross government debt at or below 60% of GDP. The five largest countries in the Eurozone have all consistently failed to hit that target since 2009.

However, Germany is finally set to hit that target in 2019 with government debt as a share of GDP having tumbled from 80% in 2012. That drop is set to continue precipitously. By the mid-2030s it is very possible that German government debt will have virtually evaporated. That scenario requires only the following entirely mainstream assumptions: 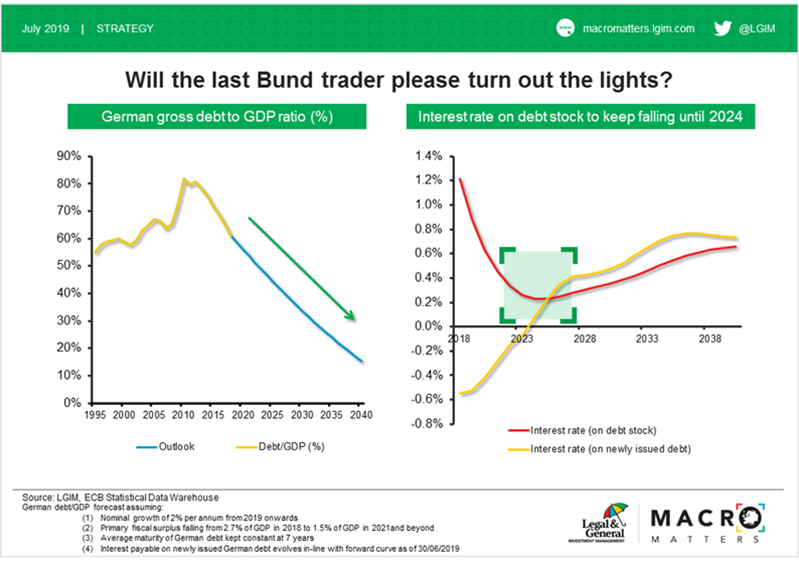 Under these assumptions, debt will fall below 30% of GDP by 2032 and under 20% of GDP by 2037. Is that such a ludicrous proposition? It’s not unheard of for a Western European economy. Sweden is struggling to keep debt above its 'anchor' at 35% of GDP for similar reasons. Estonia has gross sovereign debt outstanding of just 8% of GDP.

But the disappearance of German debt would rob the Eurozone of the liquid safe asset which acts as the cornerstone of the financial system. A few years ago, the European Commission published a Reflection Paper, arguing that a pan-European safe asset 'would help diversify the assets held by banks, improve liquidity and the transmission of monetary policy and it would help to address the interconnection between banks and sovereigns'. In the absence of such an asset, should it be much of a surprise that German securities are so eye-wateringly expensive?

Over the past couple of years, pundits and investors have repeatedly argued that German government bonds are the 'short of a lifetime'. They have been repeatedly burned by tumbling yields. From time to time, we too have been unable to resist the siren call that 'yields can't possibly move any lower'. If we had all taken a bit more time to consider the supply dynamics outlined above, maybe there would have been less of a surprise.

Even before you consider potential additional asset purchases from the European Central Bank, the German government bond market is steadily disappearing before our eyes.

Will the last bund trader please turn out the lights?