The UK inflation-linked government bond ('linker') market is dominated by vast UK defined benefit pension schemes. Derisking by schemes tends to increase demand for linkers as equity prices rise, pushing up their prices. For multi-asset investors seeking diversification, that could make them less attractive to buy.

The 1.5 trillion UK defined benefit pension scheme market is a behemoth that leaves its mark wherever it treads. We believe it's distorting the price of inflation-linked UK government bonds, which are commonly referred to as 'linkers'; in turn, we believe this weakens their long-term return potential.

There's also evidence that UK pension schemes derisking from equities into liability-matching assets, like linkers, is causing those markets to behave more similarly; as equities values rise, it improves scheme funding levels and more of them derisk, increasing demand for matching assets like linkers, which in turn pushes down their yields and increases their prices. It’s a case of the pension behemoth wagging the linker tail.

This can be seen from the different co-behaviour of global equities prices and inflation-linked government bond yields in the US and UK. A negative correlation implies that the prices of both markets tend to rise together. The focus is on long-dated bonds as that reflects where pension fund demand tends to be. 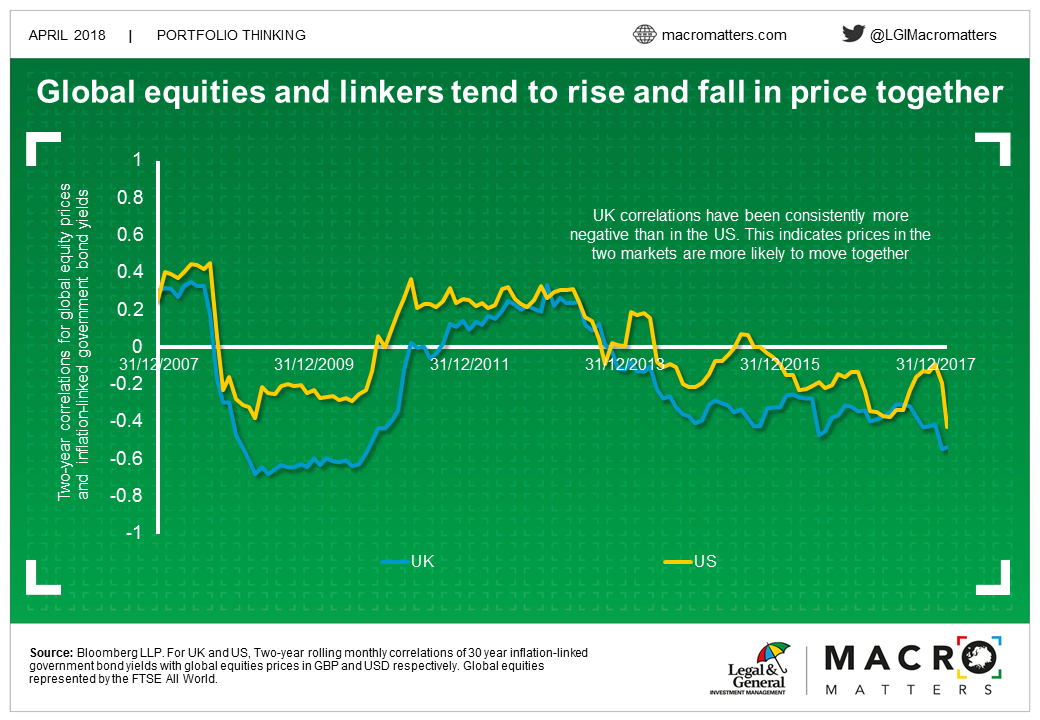 There is a consistently stronger relationship in the UK than the US. The generally negative correlation between linker yields and equity prices indicates the two tend to rise or fall in value at similar times.

This could be good news for some investors and bad for others, depending on their objectives and risk appetite. For defined benefit pension schemes there are pros and cons from equity and linker prices tending to rise and fall together.

This could be good news for some investors and bad for others, depending on their objectives and risk appetite

If linker prices are more likely to rise when global equities rise in sterling terms, then it makes it harder for schemes to close deficits because as growth assets perform well then the cost of assets to match their liabilities also rise. On the flipside, when equity markets fall and equities are worth less, then the pain might be cushioned by falling linker prices.

The relation in the UK appears particularly negative and stable in the correlations since the start of 2015, which reflect data from 2013 onwards. This has generally been a period of strong equity returns, coupled with relatively weak sterling related to Brexit, which has tended to give consistently strong appetite for derisking. In addition, more pension schemes have moved to funding level-based derisking triggers, which tend to be quite insensitive to linker prices and instead are focused primarily on derisking as funding levels rise. 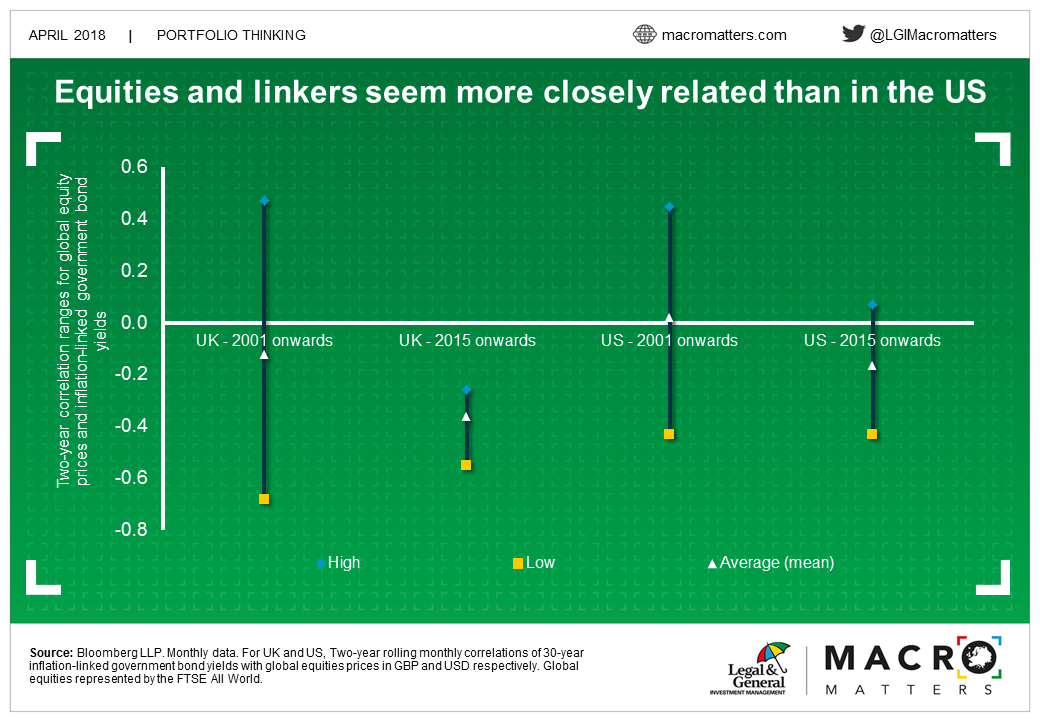 The case is clearer for multi-asset investors, where the co-behaviour of equities and linker prices will tend to make them less attractive

The case is clearer for multi-asset investors, where the co-behaviour of equities and linker prices will tend to make them less attractive. This is because multi-asset investors are focused on total return, rather than focusing on outcomes relative to liabilities. In addition, multi-asset investors tend to be worried about global, cross-region risks and so have less reason to focus on UK assets, giving a broader potential opportunity set.

Alongside our view that pension fund demand generally makes linkers unattractive value for multi-asset investors, we also think that their tendency to rise and fall in price with equities makes them less attractive than alternative inflation-linked bond markets.