Flatter still, and flatter, shall thy curve be set

The US yield curve has consistently flattened since the Federal Reserve began tightening monetary policy several years ago. History strongly suggests that this is an entirely normal market reaction to a rate hiking cycle. If short-term interest rates continue to rise at the pace we expect, we could well be looking at an inverted curve by the middle of 2019. 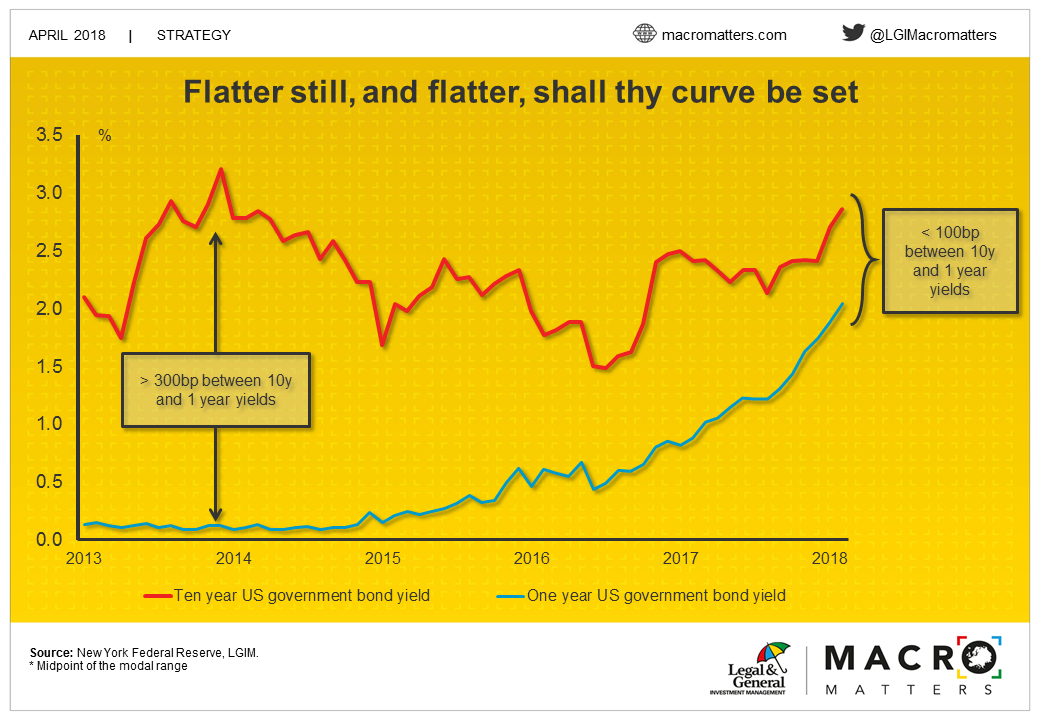 US monetary policy began its long process of normalisation back in late 2013. The pace of quantitative easing was wound down from December 2013 onwards, with purchases ending in October 2014. Just over a year later, the Federal Reserve (Fed) increased its target for short-term interest rates after almost exactly seven years of being anchored at close to zero. Interest rates have subsequently been increased a further five times and all the indications suggest that the hiking cycle will continue through the balance of this year and beyond.

However, a funny thing has happened on the way.

The spread between long and short-term interest rates has persistently narrowed ever since the starting gun was fired on the tightening cycle back in December 2013. In the vernacular of the bond market, the yield curve has flattened significantly. We can see that in the chart above: the yield on one-year US government debt has risen sharply, whereas the yield on ten-year US government debt has been remarkably stable.

Given that the treasury yield curve helps determine the present value of all future nominal cashflows, this is quite a big deal. It begs lots of potentially interesting questions: Why has this been happening? What does it tell us about the future? Is it normal?

Putting the first two questions to one side, we can try to tackle the third courtesy of a fantastic database of US yields maintained by the Fed which we have augmented with another compiled by McCulloch & Shiller (1987).

According to a quote dubiously attributed to Mark Twain, “history doesn’t repeat itself, but it does rhyme”, students of bond market history (and I recognise that is a bit of a niche crowd) can see a cyclical pattern that has been as rhythmic as any iambic pentameter.

In the chart below, the blue line is a proxy for the stance of monetary policy. It shows where short-term interest rates are relative to the average of the last five years. The red line is the slope of the yield curve (i.e. ten-year yields minus one-year yields). We use one-year yields as a proxy for T-bill yields which, in turn, are closely tied to Fed policy rates. 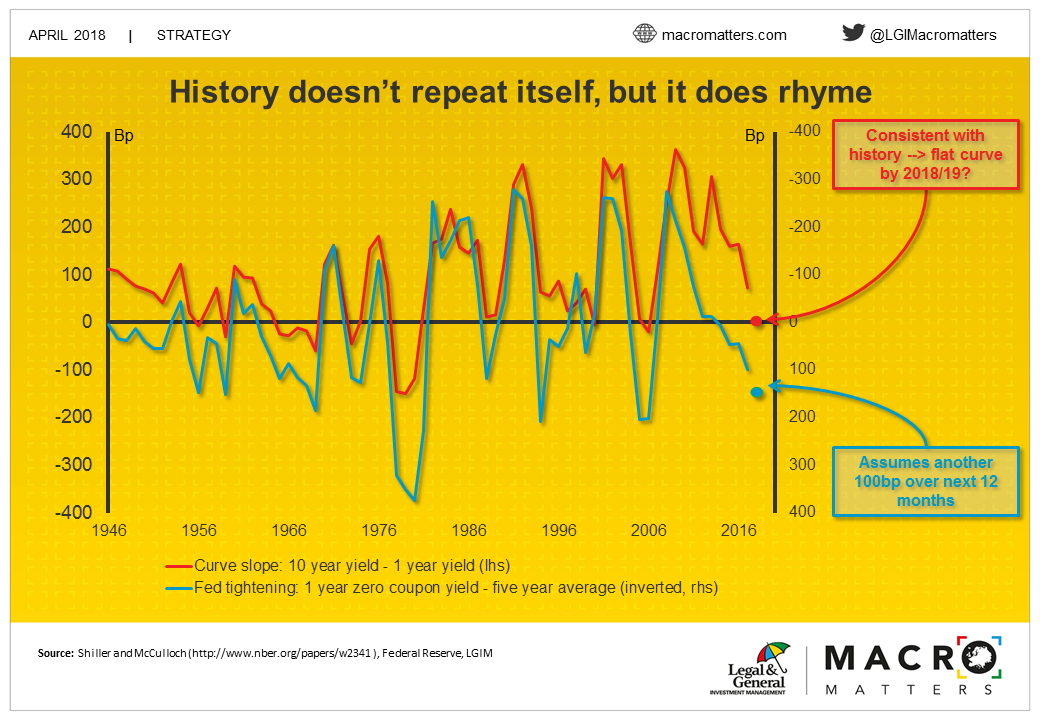 It is hopefully pretty clear that this tightening cycle looks much like every other equivalent episode in the last 80 years. If short-term interest rates continue to rise at the pace we expect, we could well be looking at an inverted curve by the middle of 2019. Given the potential market distortions due to the unwind of quantitative easing and President Donald Trump’s fiscal experiment, that is quite a striking conclusion.

As Benjamin Franklin might have observed (if he were a 21st century bond investor rather than an 18th century polymath), “in this world, nothing can be said to be certain, except death, taxes and a flattening yield curve in a monetary policy tightening cycle”.