The volume of BBB corporate bond issuance has exploded since the global financial crisis, with BBB bonds increasing from 23% to 50% of all outstanding investment grade debt. But would a recession-driven increase in the number of BB rated names (due to downgrades) create opportunity?

Ratings agencies have been around a long time. Standard and Poors (S&P) can trace its history back to 1860 when Henry Varnum Poor published “History of Railways and Canals in the United States.” John Moody published his first guide to creditworthiness in 1900. They and Fitch (1924) have become crucial as third party assessors of creditworthiness

Lest we forget, buying bonds of any sort is lending money; nothing more, nothing less. Consequently, all we should care about is getting it back on time, coupons and principal alike. We agree with the definition of risk from James Montier of GMO.

“Risk is the permanent loss of capital, never a number”

As bond investors, our job is to seek to minimise the risk of this permanent loss of capital. We need to assess creditworthiness for every bond we own (and don’t own), ensuring we are being paid accordingly.

We strive to make investment decisions based on risk, not ratings. As well as risk not being a number, is can also not be a collection of letters. Yet credit ratings have become hard-wired into mandates, typically manifesting themselves as overall limits for a specific rating category and/or single names. They are also key drivers in capital allocation from a solvency perspective for insurance companies and can drive the valuation of future liabilities by pension funds.

When decision makers evade responsibility for their actions, bad decisions can flourish (John Authers, Financial Times, 21/7/18). Rating agencies allowed fund managers into credits with a minimum "quality". Their role in the global financial crisis is much debated but it is a fact that structured finance increased from 28% of Moody’s revenue in 1998 to 50% in 2007. By the end of the crisis, Moody’s had downgraded 83% of all the 2006 Aaa mortgage backed securities.

Back to BBBs. Since 2007 BBB issuance has exploded. Central bank bond purchase schemes have had the explicit objective of driving down yields to influence investor behaviour. Well it has influenced borrower behaviour too. Across euro, US dollar and sterling credit, BBBs have increased from 23% to 50% of outstanding debt. The ratings quality of the sterling investment grade market is the weakest it has ever been. Even more significant is that 50% of the increase is from issuers who hadn’t issued prior to 2010. BB rated names have been incentivised to de-lever to return to investment grade, thus meeting eligibility criteria for the European Central Bank's asset purchase programme. 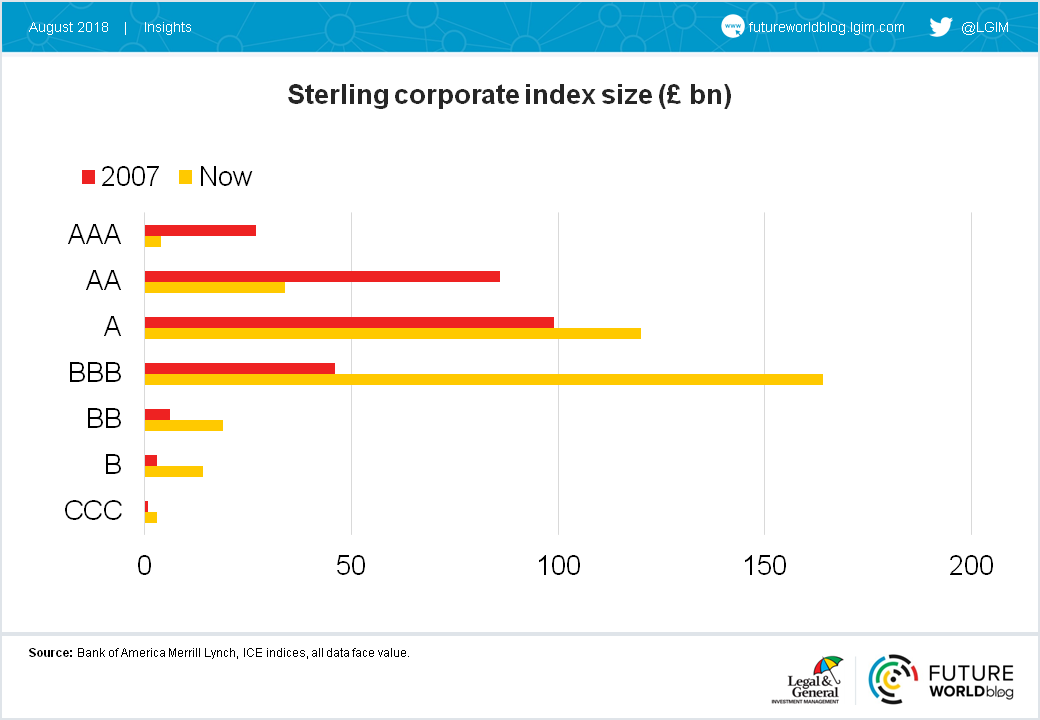 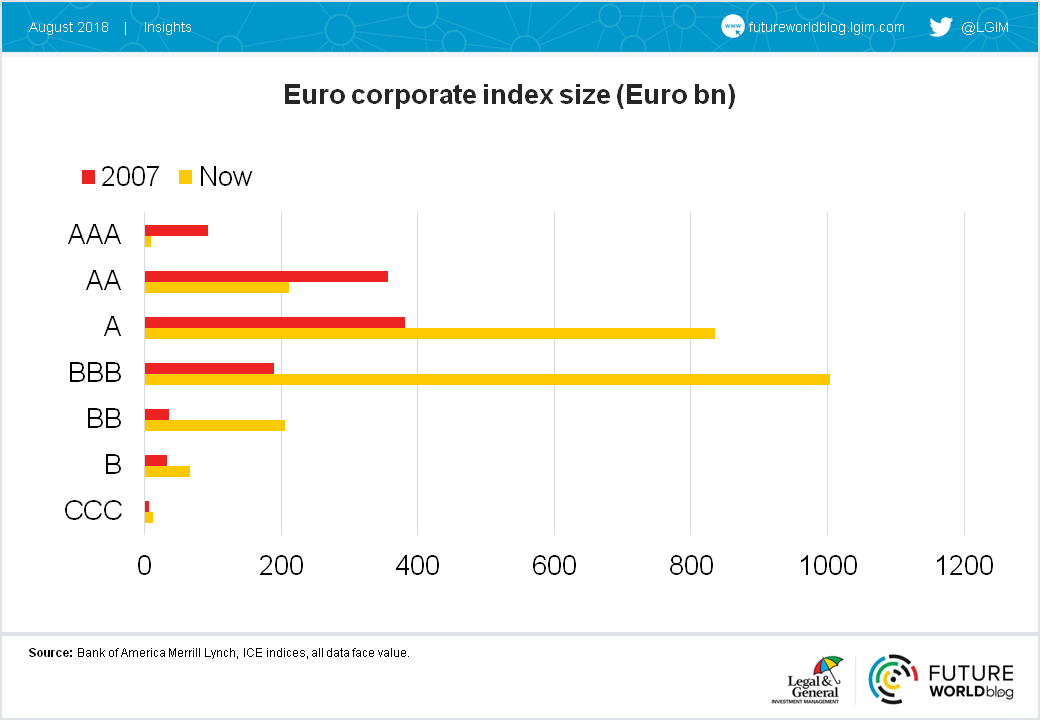 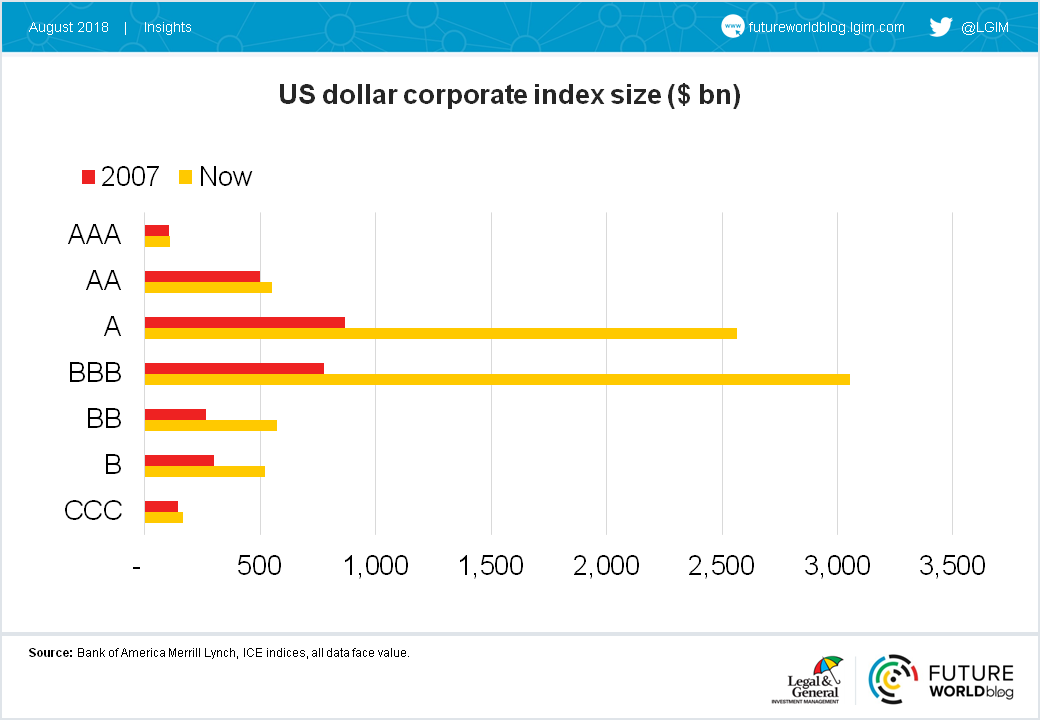 If 7.7% of BBBs were to become high yield in a nasty recession, the following table suggests the increase in BB debt would ranges from 31% to 68%, with sterling credit the most affected given its smaller weighting in BBs.

With disruption comes opportunity, though. Buying fallen angels at an opportune time has historically been beneficial. That said, we are concerned about the wholesale deterioration of credit quality over the last decade and the havoc that recession driven downgrades could wreak in a market where liquidity has structurally deteriorated. The door to the exit simply would not be wide enough.

Mark is the Head of Pan European Credit with responsibility for sterling and euro investment-grade credit teams. He is the lead fund manager on the sterling flagship retail funds. Mark joined LGIM in 2014 from AXA Investment Managers where he held the title of Head of Credit, UK. Mark was closely involved with AXA’s successful entry into the buy and maintain credit strategy as well as delivering above-target performance on a range of segregated and annuity funds. Prior to that, he was at the Royal Bank of Canada in a variety of senior capital market roles, latterly as Managing Director, Head of Syndicate and European Debt Capital Markets. Mark graduated from the University College of North Wales with a BA (hons) in Economics in 1984 and from the University of Bradford Management Centre with an MBA in 1985. He also holds the Investment Management Certificate.