History suggests that equities struggle to make gains ahead of US mid-term elections. With anti-trade rhetoric likely to feature in this autumn’s campaign, this time is unlikely to be different. On the other hand, we have also learnt to be prepared for the opposite with President Trump.

In just under four months, Americans will go to the polls for the first national election since Donald Trump took office. While the name ‘Donald J. Trump’ won’t appear on the ballot paper, the president will be heavily involved in the campaign and his performance will have a big bearing on how people vote.

There are two approaches one can take when thinking about the market impact of the mid-term elections:

The former makes sense most of the time, but the latter is more likely to be relevant when Trump is involved. Let's look at both in turn.

There are two things we know about the newsflow running into the election. The Mueller investigation into Russian involvement in the 2016 presidential election is likely to go quiet for at least the final month ahead of the campaign, even if it continues apace in the background. The Special Counsel investigators will not want to be seen to be influencing the election, especially after former FBI chief James Comey’s experience during the 2016 vote.

Secondly, we know that President Trump will be in campaign mode. Remaining immensely popular with the Republican base, we believe it’s a safe bet that he will hit the campaign trail in support of party candidates in important seats. In case anyone forgot what happened in 2016, the rallies in recent weeks were a reminder of Trump delivering unpredictable and controversial headlines in this type of setting.

Predicting which topics will dominate the headlines during the campaign is more difficult, but also more important from a market perspective. Tax cuts, an infrastructure programme and trade wars all have a more direct and immediate impact on financial markets than social and cultural issues such as immigration or gun control.

If it were a ‘normal’ mid-term election, we would think about which issues are important to Republican and Democrat voters. Surveys tell us that Republican voters care more than Democrats about immigration, the economy, abortion and terrorism. Democrats care more about healthcare and social security. These ‘Republican issues’ are relatively benign topics for markets, especially given that most of the economy-related rhetoric will likely focus on stressing how well the tax reform is working rather than unveiling any new taxes or tax cuts. What Democrats will campaign on is likely to be less important to markets. Even if they win control of Congress they will not be able to pass significant legislation with Donald Trump in power.

But of course this will not be a ‘normal’ mid-term election. Given Trump’s dominance of the airwaves, what matters more than any of the above is which issues the president will campaign on.

From this perspective, the trade war seems likely to feature heavily in the autumn campaign. While trade doesn’t rank highly in voter surveys, it is likely that Trump will see it as a vote winner. It delivers on a 2016 campaign promise, symbolises ‘America First’ and his aim to project strength, and there is no evidence that the aggressive trade rhetoric has negatively impacted Trump’s approval rating. There is also an argument that while the average American may not care about trade policy, it is a very important issue for some voters in battleground states with a big manufacturing footprint. An anti-trade message could excite some voters, but not turn anyone off.

A look at market performance around previous mid-terms leads to the same conclusion: mid-term elections weigh on equity returns. There have been 14 mid-term elections since the early 1960s. On average, the S&P 500 traded lower over the summer preceding the November election, troughing about a month before voters headed to the polls (see chart below). But there has been no discernible slowdown in earnings around mid-terms. The share price weakness being driven by a de-rating is consistent with it being the result of uncertainty over future policy or disruptive headlines. The good news is that history also suggests that such dips have typically been buying opportunities, as earnings growth continued and any uncertainty discount was eventually priced out. 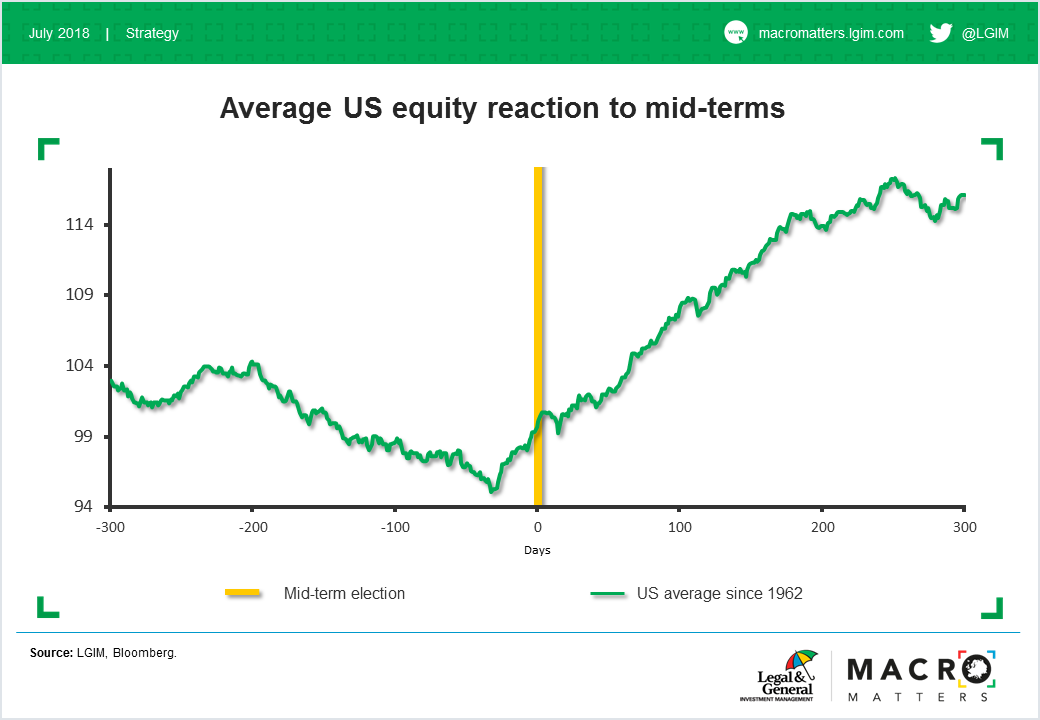 Overall, while I don’t think that the US mid-term elections will be a game changer for global equities, my base case is that it is premature to call 'peak trade war' and bet on a reversal. However, our motto for political events of ‘don’t predict, prepare’ applies here as much as anywhere. Predicting Trump has been a mug’s game, so we must also be prepared for the opposite of our base case.

The main risk to the base case is that Trump announces a flurry of trade deals ahead of the election. He could sell this as his tough approach to trade having worked, that he delivered on his promise of better trade deals that are good for the US economy and its workers. It would still tick the boxes of ‘America First’ and deliver on past election promises and could conceivably be a greater vote winner than the trade war rhetoric itself. Watch this space!