No Law of Gravity

Investors face two conflicting biases: on the one side, to buy into recent information and the latest story, and on the other, to expect mean reversion following strong returns. Well, there’s no Newton’s Law of gravity when it comes to equity markets.

Despite a 2019 S&P total return in excess of 30%, 2020 could still be a strong year. In fact, looking at last eight instances where the S&P has rallied over 20%in a calendar year, the index has also risen the following year, with a median return of over 15%. Furthermore, equity returns in January have historically been stronger than average, and positive in 65% of cases over the last 90 years. 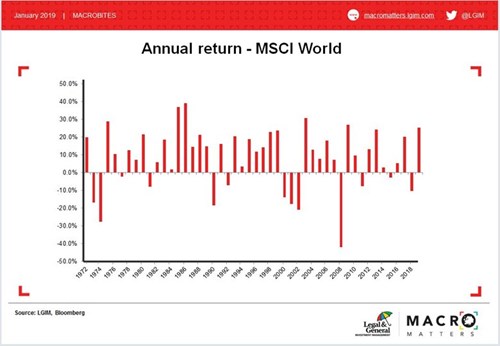 So what would make us more negative on equities in the short term, given that our macroeconomic view is similar to consensus? Most notably, it would be excessively positive sentiment, but somewhat surprisingly this has not been evident in the data. There is some evidence of long biases, such as systematic, signal-based quant strategies approaching maximum long positions, but overall we’re not at levels where we have a contrarian indicator. At the same time, investor surveys and the more quantitative indicators we monitor currently show relatively neutral sentiment and positioning.

On the other hand, what would make us more optimistic? This would most probably require a change in our macro view. The ‘bull’ case from here is one where the stabilisation in global growth data turns into an outright growth recovery. It’s a scenario where global manufacturing PMIs rise to the mid-50s but crucially, the Fed remains on hold nonetheless, suggesting no willingness to slow down the recovery. After pricing out recession risk late last year, investors could then swing all the way to pricing in an acceleration of growth. If the sentiment pendulum were to swing all the way back from fear to greed, markets could even overshoot and deliver the double-digit return year that has historically tended to follow 30%+ returns.

Our base case, however, remains more cautious. Given the mixed signals, we retain our marginal equity short position, which reflects the limited risks we feel are currently being priced into markets for 2020, as evidenced by very low equity market implied volatility. We believe in particular that there is too much optimism around the so-called ‘phase 1’ trade deal between China and the US, and that there is not enough caution around the Democratic primary elections, including the probability that a less market-friendly Democratic candidate wins.