Although this year’s Ryder cup has been and gone, it highlighted that Europe is more than capable of outperforming the USA. Equity markets have not yet seen the same results, but could now be the time for a swing in momentum?

Although the performance of European equities (via the Euro Stoxx 50 Index, Europe’s leading blue-chip index for the Eurozone) compared to the rest of the developed world has been under par, this has largely been a function of US equity strength, rather than European weakness. When compared with regions such as Asia-Pacific and the UK, Europe has been relatively flat.

So what has been the cause of the underperformance of Europe versus the US?

Sector differences can often drive a wedge between the performance of different regions, and one might think that the larger share of the US tech sector is the leading factor here. However, recent movements appear to be due to a period of overall US dominance, irrespective of sector.

Looking at absolute sector returns, the US outperformed Europe in all-but-one sectors so far during 2018. European equities found themselves in the deep rough of political uncertainty in Italy, along with the buffeting winds of tariffs being threatened on European car exports to the USA, whilst the US market continued to find the fairway, thanks to the boost of President Donald Trump’s tax cuts. 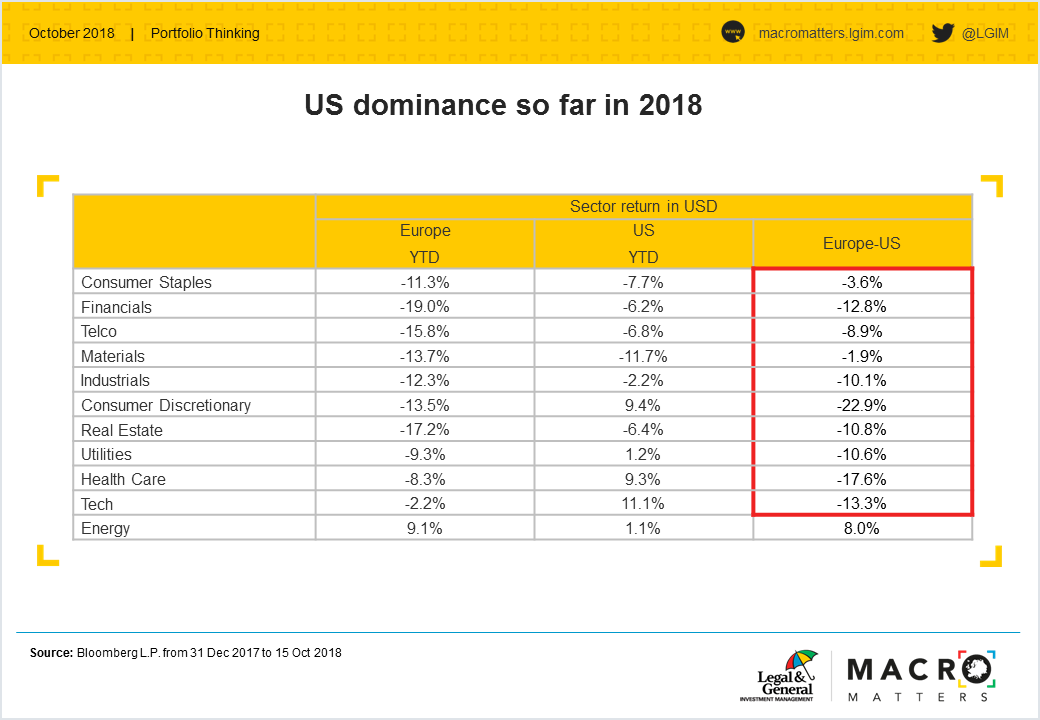 So why should we remain invested in European equities?

Several surveys show that investors have become increasingly pessimistic about the prospects of European equities. There’s quite a consistent trend of deteriorating investor sentiment since the highs reached following the election of Emmanuel Macron. By contrast, the survey results show investors becoming progressively more bullish the US over the same period. This means that it may not take much for European data releases to surprise positively, whilst there is a lot of water to clear for investors in the S&P 500.

Another positive, is that the underperformance of share prices has exceeded the degree by which European earnings have lagged the wider developed market; i.e. European equities have de-rated, making them relatively cheaper. 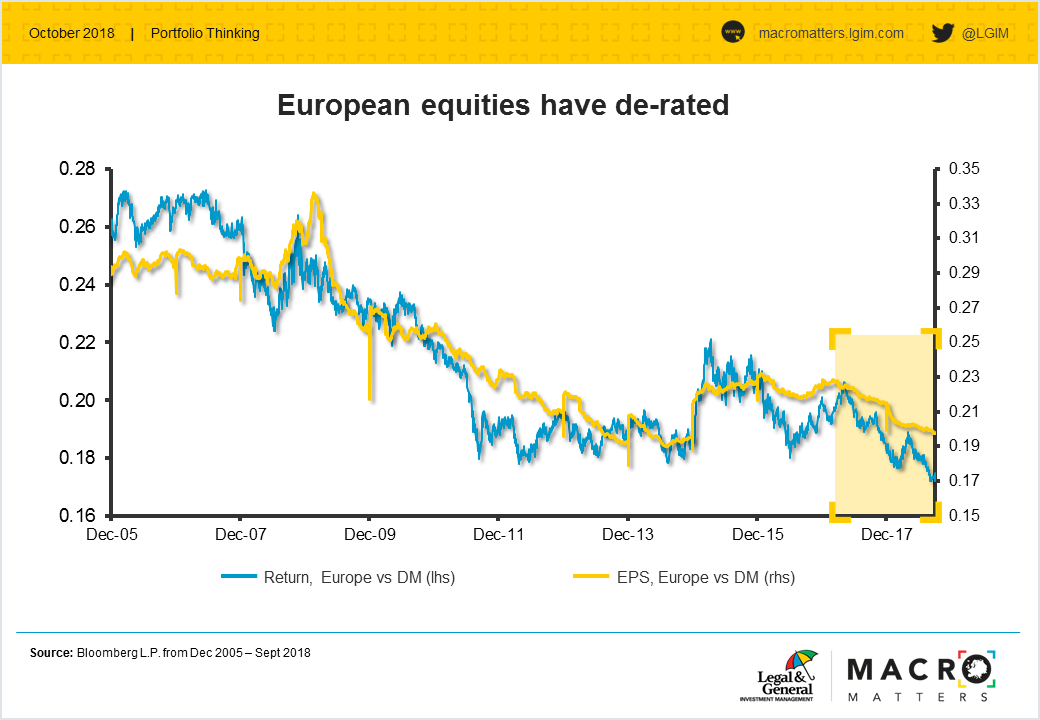 Finally, European relative performance has undershot relative economic surprises, which have been broadly in line with other developed regions recently. With consensus having recently sliced their European growth numbers and US expectations elevated, we feel that this increases the chance of Europe outperforming to close this gap. So while we in the Asset Allocation team might be slightly down on our trade, we are staying the course and hope that it drives better performance going forward. 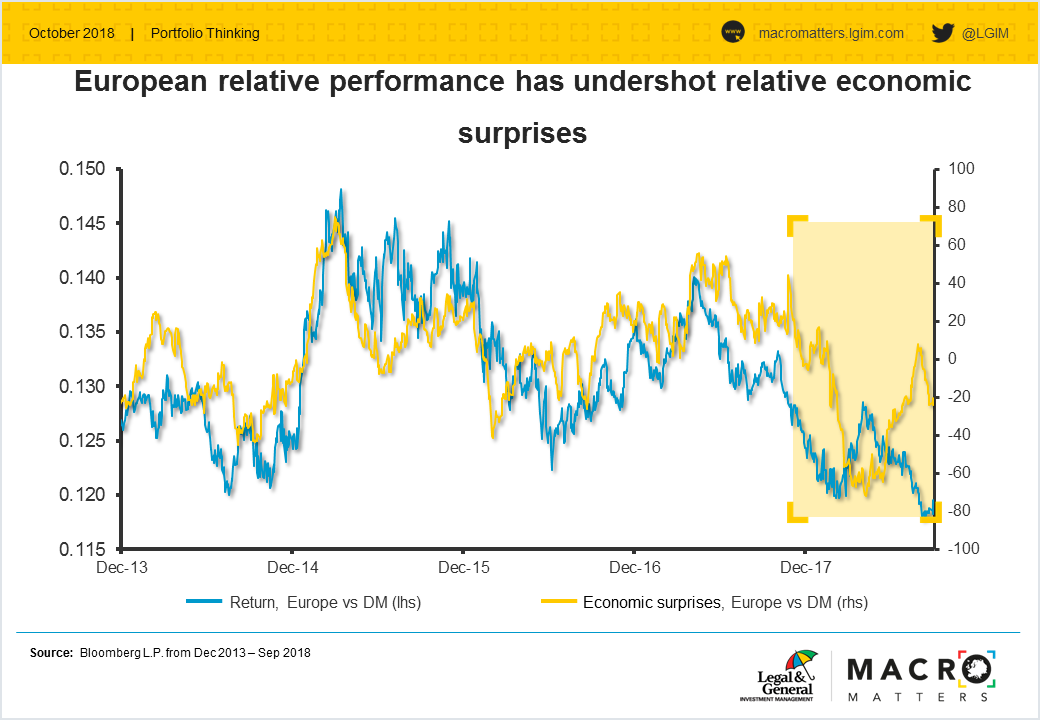 Joe is an investment specialist across Asset Allocation but also covers Factor-Based Investing funds, so he loves anything big picture and anything rules-based, though the state of his desk would suggest otherwise…. As the only member of the team with a beard, this may be the reason people liken him to Vincent Van Gogh and everyone thinks he’s far older (and hopefully wiser) than he actually is(!) Since moving to London, Joe has been spreading the word that his home county of Derbyshire isn’t that bad. So far this message has fallen on deaf ears, with team members opting to holiday in other comparable destinations such as Barbados and Nicaragua. 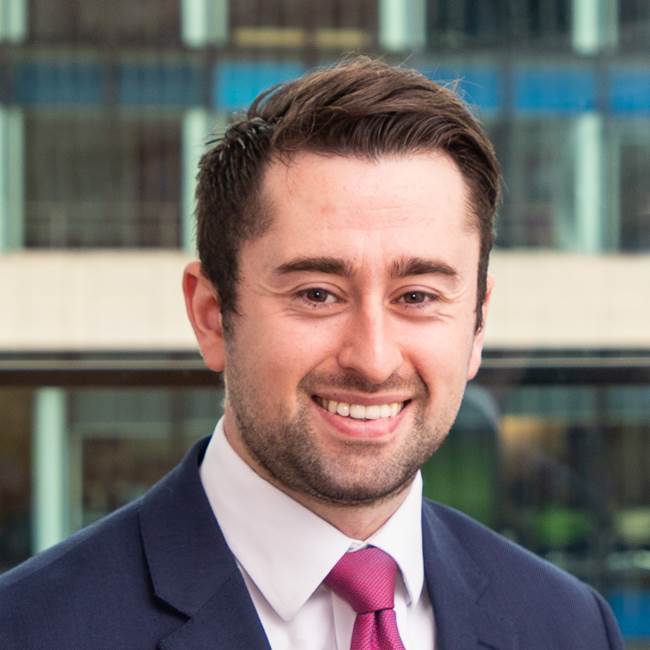