My kingdom for an index-linked gilt

Following the recent 2051 index-linked gilt syndication, we look at how supply and demand is affecting inflation valuations in light of RPI reform.

It was a cold, damp January. I afforded myself a slight smile as I noted that, along with the days, the mornings were now also becoming lighter. I reached into my metaphorical wardrobe to pull out my standard-issue actuarial superhero cape. It was time to make some heroic assumptions about inflation – specifically about long-dated sterling inflation rates.

Could inflation valuations beyond 2030 remain in excess of the Bank of England’s 2% target after RPI reform?

That was the key question LDI investors were asking.

With all the talk of asset bubbles, was there the possibility of a bubble in inflation? I decided that I would never witness the day that 30-year inflation was discussed at a dinner party. I made a mental note never to include that metric if I ever produced my own inflation bubble index. I then moved onto some calculations:

The chart below is a snapshot of the inflation swap curve along with one-year forward rates – essentially a means of seeing how different parts of the curve are valued by looking at one-year implied rates in, for example, 30 years’ time. 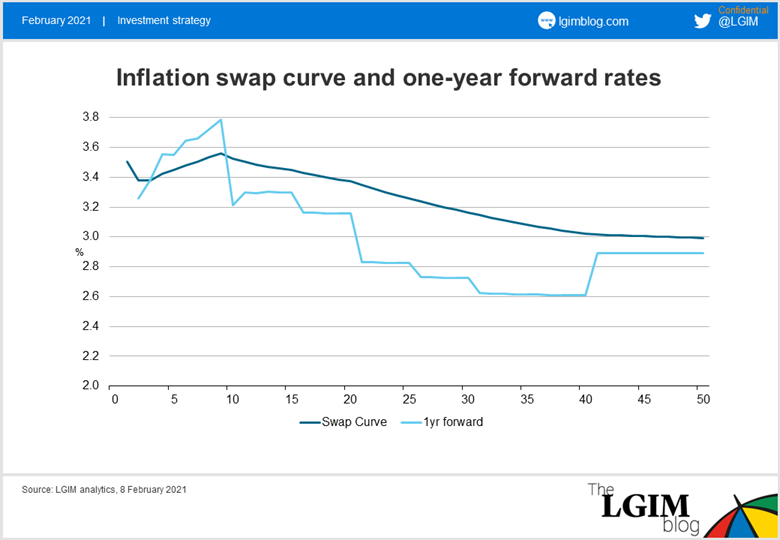 For the purpose of this blog, I’m looking only at longer-dated inflation, which I loosely define as 20 years and beyond. As shown in the chart, the forward rates beyond 20 years imply that inflation rates exceed the Bank of England’s CPI target of 2% by around 75 basis points (20 years to 30 years) and 60 basis points (30 years to 40 years).

It is often argued that the Bank of England is more concerned about deflation than inflation running slightly higher than 2%. We will therefore take “fair” value (ignoring any term premium for simplicity) as being in the region of 2.2%, which leaves the premia for 20-30 years and 30-40 years at around 55 basis points and 40 basis points, respectively.

On a backward-looking basis, if I look between 2011 and 2018, I see an average premium of 40 basis points and 10 basis points (for 20-30 years and 30-40 years, respectively). I have deliberately excluded 2019 onwards on account of RPI reform, which makes it difficult to calculate the premium as it would have to be compared to some Frankenstein’s monster of RPI and CPI. Hence, over this period I have taken “fair” value as 3.2%, which is the 2.2% CPI comparator plus 1% for the RPI/CPI wedge.

It is worth noting that there is a something of a split in the data, with the inflation premium being lower from 2016 to 2018, but higher in earlier years. In summary, the current premia look higher than average, but comparable to those during the market conditions which persisted from 2011 to 2014.

On a forward-looking basis, our recent outlook[1] discusses supply and demand dynamics in the UK, alongside some market fundamentals. We note that a plausible middle ground, helped by improving funding levels, is that pension-fund demand for inflation will exceed supply by just under £30 billion in 2021.

As such, my answer to the original question is that, yes, inflation valuations beyond 2030 can continue to trade at their current premium to the Bank of England target of 2% after RPI reform.

For DB pension schemes, we believe that closing any funding-level gaps is likely to be best served through exploring possibilities for adding incremental return by looking at ways the current LDI collateral pool can be used most efficiently.

[1] Our LDI Outlook is available here. Please note, this document is for professional clients only and is not to be distributed to retail clients.

Robert works with clients on LDI and broader solutions-based investment strategy. His three Rs are rates, regulation and arithmetic (showing a maths degree lives on forever). When Robert is not pondering LDI or investment strategy and talking to clients, he can often be found cycling in the Surrey Hills or watching hours of cycling coverage on Eurosport (at 30x speed in order to prolong his marriage). 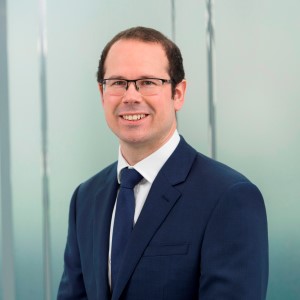