It is not unthinkable that other major central banks could follow the Bank of Japan’s lead and buy equity ETFs; the Japanese experience offers lessons on how ETF investors can support society more broadly.

Perhaps we shouldn’t be surprised by the radical measures central bankers have introduced via ‘QE infinity’ in recent weeks. In March, our head of inflation and rates strategy argued that “we shouldn’t have any doubt about the Fed’s ability and willingness to fix the cracks in the Treasury market”. Last year, our head of economics supposed that the Federal Reserve (Fed) could even follow other monetary authorities into negative interest rates.

Yet it was still a shock when, in March, the Fed announced that it would start buying corporate bonds and would even act as the ultimate buyer of last resort for exchange-traded funds (ETFs) that invest in them, given ETFs provide a convenient instrument through which to buy a wide range of securities in a single trade. It followed this with an even bolder announcement in April that it could begin purchasing high-yield ETFs.

Could deteriorating economic conditions prompt the Fed go even further and offer the ultimate intervention – buying equity ETFs? In March, Boston Fed President Eric Rosengren said that the central bank could be permitted “to purchase a broader range of securities or assets”, a hint that stocks could be on the Fed’s shopping list if both short-term interest rates and 10-year Treasury rates approach the zero lower bound.

Buying ETFs is not only on the agenda of US policymakers, either. Also in March, Peter Kažimír – who sits on the European Central Bank’s Governing Council on behalf of Slovakia – stated that he would not “rule it out for the future”.

Unprecedented times call for, well, precedented measures. After all, one major central bank has been using ETFs as part of its stimulus efforts for a decade now.

Back in 2010, the Bank of Japan decided to start buying equity ETFs up to a limit of 450 billion yen. That activity has increased significantly since then, with the annual maximum reaching 12 trillion yen in March this year.

The nature of the Bank’s purchases has changed over time too. Initially, it used only ETFs tracking the mainstream Topix and Nikkei 225 indices. But in 2015, it decided to allocate to ETFs focused on companies “proactively making investments in physical and human capital”.

At a time of immense social and economic disruption, that may be a path other central banks and policymakers wish to take too, rather than just using monetary intervention to prop up asset prices.

But does it work? A newly updated study available from the National Bureau of Economic Research can help us answer that question. The paper examines the impact of the Bank of Japan’s ETF purchases on a host of financial and corporate metrics, concluding that the programme did appear to enhance the valuations of the underlying stocks and so encouraged those companies to make greater use of equity financing and increase their book assets.

However, it seemed that the money raised by companies was not invested particularly productively; most of it sat in cash on corporate balance sheets. There was a very slight increase in employment associated with the ETF purchases, but no statistically significant impact on research and development expenditure, for example.

One caveat to all this is that the Bank of Japan does not vote with the shares it owns in companies through ETFs. This reflects the Bank’s stated aim of its purchases, namely to lower the risk premium of equities rather than influence the country’s boardrooms, so it does not use its shareholder rights to push for any environmental, social, or governance (ESG) priorities.

Politicising monetary policy in such a way would obviously be an immensely difficult endeavour for any central bank, and state authorities who wish to influence corporate governance have powerful legislative tools in any case.

Other ETF investors, though, can and should exercise their rights purposefully, in our view. The experience in Japan demonstrates that allocation decisions can shape corporate behaviour, albeit in that instance just by incentivising companies to raise more money. More active owners could achieve much more.

We believe active engagement, through investment stewardship with impact, is a key pillar of responsible investing and should be incorporated across every portfolio.

More insight into how LGIM votes and engages actively and transparently is available here.
ETFs

Cosmo joined LGIM’s ETF team in April 2019 as Head of Business Development. In this role he works on our strategic market positioning and ensuring our business continues to evolve as the industry progresses. Prior to this Cosmo was a Senior Product Strategy & Development manager at LGIM, contributing to the design and delivery of new pooled products at LGIM, as well as driving the firm’s product strategy across its investment range. Cosmo joined LGIM in February 2017 from Aberdeen Standard Investments where he worked in the Product Development team. Prior to that, he was an Investment Analyst in Mercer’s Investment Consulting Business where he advised pension fund and insurance clients on their investment strategy and manager selection. Cosmo graduated from Bristol University and holds an MEng in Civil Engineering. Cosmo also holds the IMC. 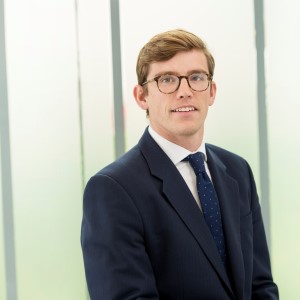