How could investors not like technology stocks? They’re cool companies, led by charismatic CEOs making irresistible products. And what's more, they're posting amazing growth rates with stocks that just keep going up. I’m sure the bottom-up investment case is much more sophisticated than that, but today I want to lay out the strong macro case for tech stocks.

Tech is likely to be a beneficiary in a retail bubble scenario. One of my bullish scenarios for equities as we enter a late-cycle economic and market environment is that retail investors return to the asset class. Retail investors have largely been absent so far in this bull market, but it would not be the first time that they get pulled into equities by strong momentum in the latter stages of a bull run. This scenario becomes more likely as the economy strengthens and memories of the last bear market fade. Retail-driven markets need a compelling narrative and technological progress (AI, robotics, autonomous cars etc.) is my best bet to play that role this time round.

Tech should also cope well with another late-cycle dynamic: increasing wage pressure. Rising wages are unlikely to be a game-changing drag on aggregate earnings, but there will be relative winners and losers. Many tech companies have the ideal business model for this environment: they're not very labour intensive and have high margins. Rising wages add little in terms of costs and any cost increase there is should only lead to a relatively small change in the bottom line.

Whilst tech is vulnerable to recession, it has several more supporting factors in a late-cycle environment. As market earnings growth slows down in a maturing economic cycle, tech companies could have more ways left to boost shareholder returns via cost cuts, buybacks and dividends. And having cash on their balance sheets makes large tech companies less directly exposed to concerns about the credit cycle slowing down.

"However, tech is likely to underperform in the next bear market"

I also don’t share a typical investor concern: expensive valuations. Obviously tech has outperformed, and by a lot, but it would be wrong to confuse outperformance with re-rating. Share prices are up more than the market, but so are earnings! There are different ways of making the tech valuation case, but the fact that the sector trades on a similar price-to-earnings ratio as the consumer staples sector, while posting more than double the revenue and earnings growth, is perhaps the best. 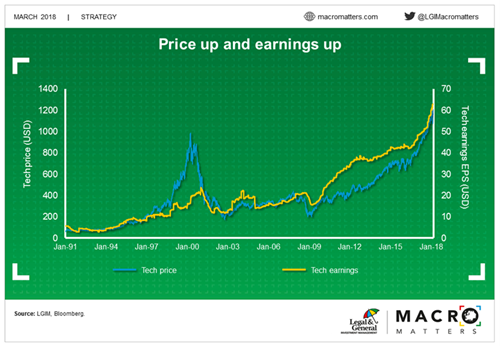 The ‘new political paradigm’ of the growing trend towards populism is one of our medium-term themes. We would expect tech companies to be beneficiaries of protectionist policies. Any policies aimed at shifting production back to developed economies would likely be answered with greater investment in automation and robots rather than only expanding the human workforce.

"Whilst tech is vulnerable to recession, it has several more supporting factors in a late-cycle environment"
Of course, just as there are macro opportunities, there are also macro risks. Three risks stand out to me:

So while no sector is perfect, I believe that there is a strong macro investment case for technology companies. And from a strategist’s perspective it has the added benefit of 'having to' read research about fascinating things like burger-flipping robots, Go-playing artificial intelligence and self-driving cars.