You repo what you sow…

We examine recent price changes in repo markets and how long they are likely to last.

Repo markets have behaved in a very interesting way recently, with the funding costs crashing from their highs in March 2020 to their current levels, which are as low as we’ve seen in the past seven years. 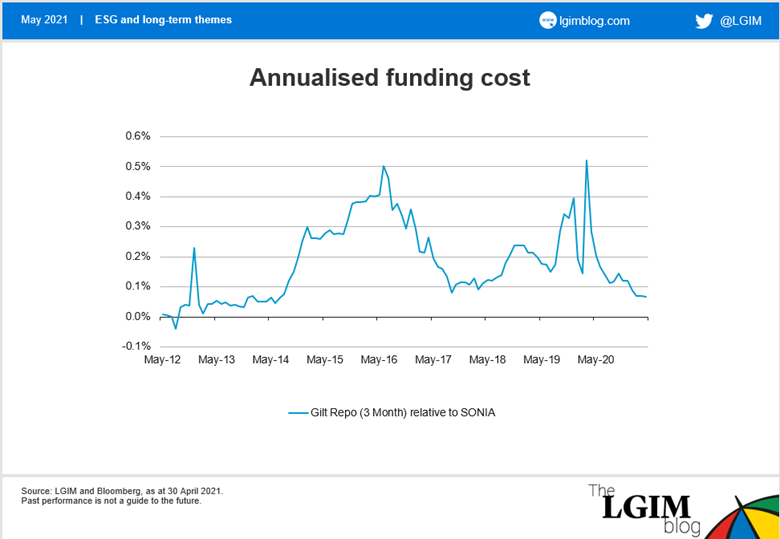 The year-end saw a brief pause in the tumbling of prices due to regulatory pressures on banks, mainly affecting US institutions, which meant a temporary reduction in their willingness to provide cash to the market. This resulted in a squeeze in repo liquidity and a short-lived spike in pricing.

Since the start of the year, however, the UK market has been flooded with cash.

First of all, the year-end regulatory pressures were no longer an issue. The second factor is the use of the TLTRO programme in Europe. The Targeted Longer-Term Refinancing Operations provide cheap credit to banks, resulting in decreased demand for cash from elsewhere. This means that European banks that do have extra cash to lend prefer to utilise it in the UK market, further increasing the supply of repo into the market.

Finally, one of the most important factors has been the ongoing QE programme in the UK. Quantitative easing is a process whereby the Bank of England buys government bonds, inserting money directly into the system. Since March 2020, the Bank has bought or announced its intention to buy £450 billion worth of gilts.

Not only does this increase cash available to be lent out in the repo market, but it also decreases the amount of gilts available to be used as collateral, driving the repo costs further down, close to their all-time lows.

This provided a great opportunity, in our view, for our clients to benefit from cheap funding and switch some of their swap hedging into gilts that are now much cheaper to fund.

However, we don’t expect this cheap funding feast to last very long.

On the demand side, a lot of investors avoided rolling their repos in the first quarter of 2021 due to concerns over Brexit uncertainty, but the second quarter has seen an increased demand for funding.

On the supply side, we have the NSFR (Net Stable Funding Ratio) rules coming into force in June for European and US banks, with UK banks to follow early next year. These rules regulate the amount of capital that banks need to hold, resulting in a reduction of their ability to provide liquidity to the market.

The UK banks are also restarting their dividend payments, a lot of which had been suspended during the pandemic, and this further reduces the amount of cash available to be lent out.

Against that, the cautious reopening of economies provides people with the opportunity to spend what they have saved during the lockdowns. This spending is likely to be quite guarded after the initial surge, because the lack of job security is still very fresh in people’s minds.

All in all, we expect the funding costs to move gradually up from the current lows, but we do not expect any sharp jumps.

Nelly is very keen salsa dancer by night and a senior LDI portfolio manager by day. She spends her days looking at the markets, designing portfolios for pension-fund clients, and training junior fund managers, and her evenings either dancing or planning her next trip. Nelly has an MSc (distinction) in Finance and Investment from Edinburgh University Business School and a BSc in Economics and Finance from the London School of Economics. Her other hobbies include being on stage – be it speaking at an international conference or doing a catwalk in a fashion show.