The inflationary impact of the war in Ukraine has added to pressures on managing Italian debt. Here we review the causes behind these stresses, and the options the ECB has to respond.

With inflation rising alongside a tightening labour market, the European Central Bank (ECB) has become more hawkish and is now set to end asset purchases as early as July, with hikes to the deposit rate coming shortly after. This raises significant questions around Italy’s debt position, and the prospects for ECB intervention.

Previously, the backdrop was supportive of European peripheral bonds, with the ECB the buyer of a significant portion of net supply. However, we are now in an environment where the market is searching for the equilibrium level in spreads that will make up for the shortfall in demand.

One of the main benefits of the ECB’s Asset Purchase Programme (APP) was that it lowered the cost at which sovereigns were able to issue debt.

This was especially helpful for Italy, where debt was forecast to reach 160% of GDP[1] as a result of the support provided by the Italian government over the course of the COVID-19 pandemic.

Additionally, the post-lockdown  recovery has led to stronger growth forecasts and inflation no longer undershooting ’ targets,  further reducing the costs of servicing the Italian national debt.

However, this beneficial environment appears to have come to an end.

Growth forecasts around the region have been delt a blow by Russia’s incursion into Ukraine.  Rising commodity prices are forcing the ECB to focus on its inflation mandate.  As such, the improvement in Italy’s debt ratio is more modest now that yields are rising faster. 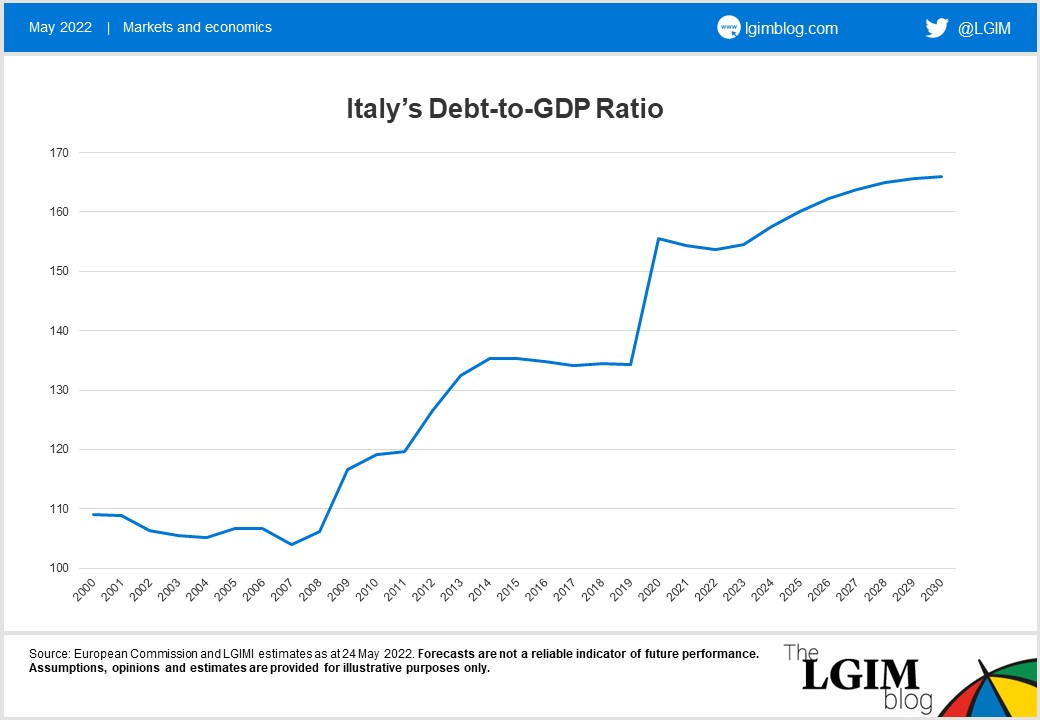 Debt servicing costs change at a slow rate due to the significant amount of time debt refinancing requires – the weighted average maturity of Italian bonds is around seven years[2].

However, with near-term expectations having turned from a strong to only a modest improvement in debt metrics, the starting point has become weaker.  As yields rise, the market will continue to reassess the premium it requires to assume the added risk that owning Italian bonds entails. 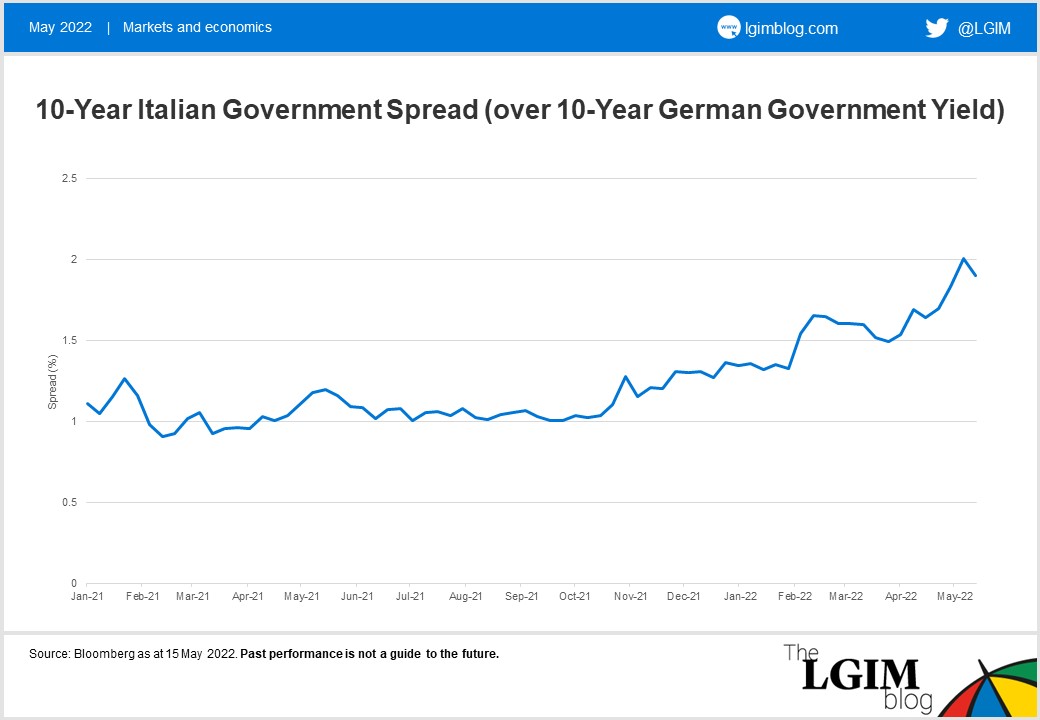 Yields in German government bonds are the market’s proxy for a risk-free rate, and the pace of their rise has accelerated in recent weeks.

This has in turn led to an acceleration of the rise in Italian spreads, which have doubled since the beginning of 2021[1]. We believe that this dynamic is likely to continue, which could itself hinder the ECB’s ability to tighten policy.

What can the ECB do?

The ECB’s Governing Council has downplayed the risks of fragmentation hindering their policy decisions.

They have hinted at resorting to a crisis tool to counter unwarranted spread widening, and it is possible it could reinvest maturing bonds from their balance sheet in alternative member state bonds to plug demand gaps.  However, this redistribution of assets can only be temporary and will need to be reversed over time.

Additionally, the need to evidence these tools as proportional makes them reactive rather than proactive and open to legal challenge if seen as overstepping the mark.  ‘Proportional’ to date has meant purchasing member state bonds in line with the weight of their contributions to the ECB’s capital.  A move to permanently buy any member states bonds over and above its contribution would need to be deemed critical to effective policy transmission.

That said, there are other mechanisms available to aid a member states market access.

The European Securities Mechanism (ESM) has a capacity to lend €500bn to member states in need of assistance.  However, this as well as the ECB’s Open Market Transactions (OMTs) require a member state to agree to strict conditionality (usually a series of structural reforms) to receive the aid.

This makes them both politically contentious and stigmatising, limiting the likelihood of their use before a point when conditions have deteriorated significantly

This is a complex topic, so we have visualised the ECB’s options below:

It’s worth bearing in mind that there are elements of this challenge that are within the ECB’s control, and elements that are not.

The ECB is able to make QE interventions as described above and, having shown considerable creativity in designing crisis mechanisms in the past, it is feasible it may do so again.

On the other hand, the ECB has little to no say in when a member state applies for assistance or in the deployment of ESM loans (they are run by a separate entity). Also, given their highly sensitive nature, the ECB is only one party to any debt relief negotiations – politics could win out over any purely technocratic solution.

Overall, with the trend toward higher yields looking increasingly ingrained in recent weeks, we have been and remain concerned that the widening in peripheral spreads will not just continue but intensify.

Rising yields are likely to result in wider spreads until the ECB can take concrete action to reverse these moves.

However, with spreads approaching the point where the ECB may feel pressure to act and with Italy underweights increasingly popular, volatility is likely to rise alongside any further spread widening.

Past performance is not a guide to the future. Assumptions, opinions and estimates are provided for illustrative purposes only. Forecasts are not a reliable indicator of future performance. 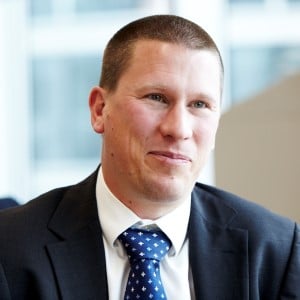 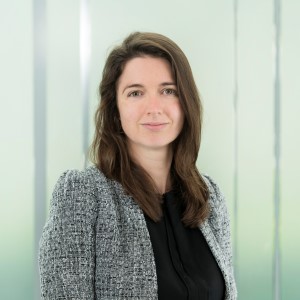 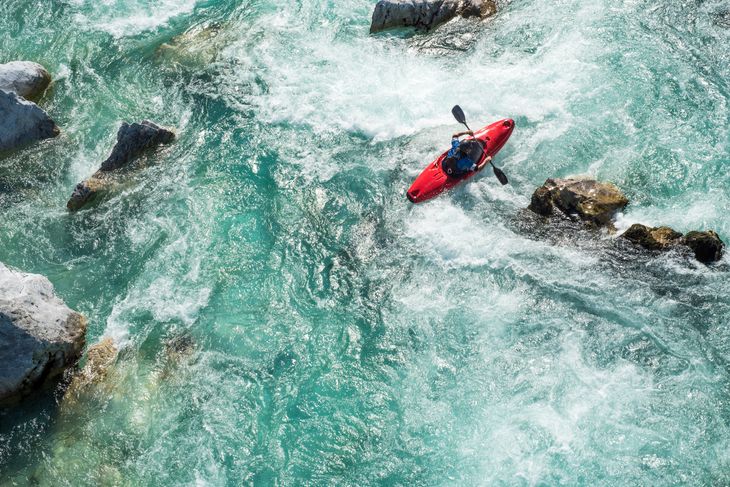