When bonds go bad…and what to do about it (part 1: credit)

In the first of a new series of blogs on the challenges and opportunities in fixed income today, I take a look at credit markets.

Bonds have been almost the perfect investment for the past 30 years: they provided income in the good times, and protected portfolios when recessions hit. But this dynamic has now reversed. Bond income is paltry, if not outright negative, while central bankers are admitting they’re out of ammo. From now on, recessions will have to be fought with fiscal largesse – stoking inflation fears – rather than bond-friendly rate cuts.

With bonds going bad, we want to dig into the implications for investors in a series of blogs. My colleagues will look at how behaviours could change, what the new bond landscape portends for equity returns, and how multi-asset portfolios can replace the income and hedging attributes of bonds. My own background is in credit markets, so I’ll start the series here.

My first observation is that lower bond yields have correlated very well with the global debt mountain. As yields have fallen, everyone from house buyers to equity-market speculators has been able to afford a bit more debt and take on more leverage. Whenever central bankers have tried to arrest economic excesses, they’ve found smaller and smaller hikes have been necessary for the debt to strangle activity. And then, of course, central bankers have been quick to cut rates to new lows, bailing out the borrowers and encouraging another layer of debt. 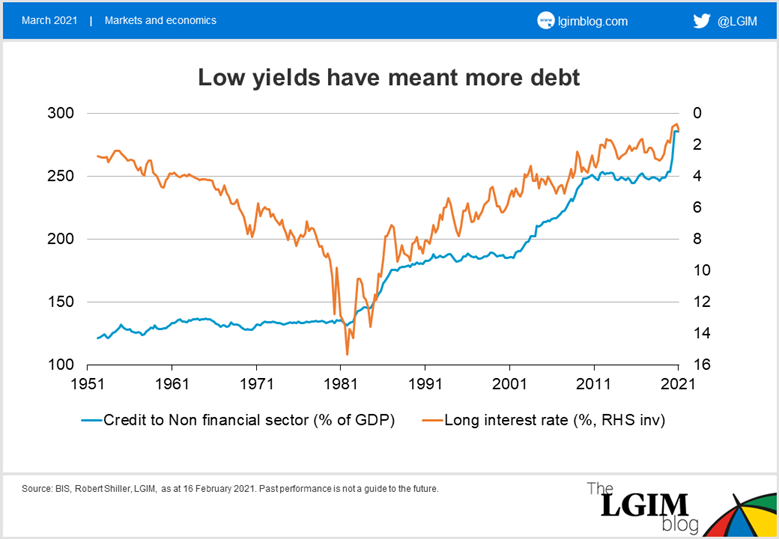 This is not just a credit-market story, of course; leverage has boosted all asset classes to some degree. But if central bankers are out of ammunition, they cannot continue to support valuations using the same tactics.

With the baton passing to fiscal policy, the new hope will be that economic growth will be boosted by rising inflation, eroding the debt mountain. This is not necessarily a bad outcome for inflation-linked assets like housing or equities, but I still think deleveraging will be a drag on everything to some degree.

And, of course, there’s the very real risk that the inflation calibration is misjudged, and we end up in another shuddering recession. I would also argue that government-determined economic allocation via fiscal dominance is not a good recipe for future productivity.

None of this looks good for credit markets. Let’s just look at starting yields. US investment-grade corporate bond yields are now about 2%, while high-yield corporates give you around 4%. The equivalent figures are a lot lower in Europe.

I’ve illustrated this in the chart below versus each market’s average annual returns since the start of the century. If central banks can’t cut rates much from here, and with credit spreads already towards the bottom end of their historical range, I would expect future credit returns to struggle to replicate anything close to their past performance. 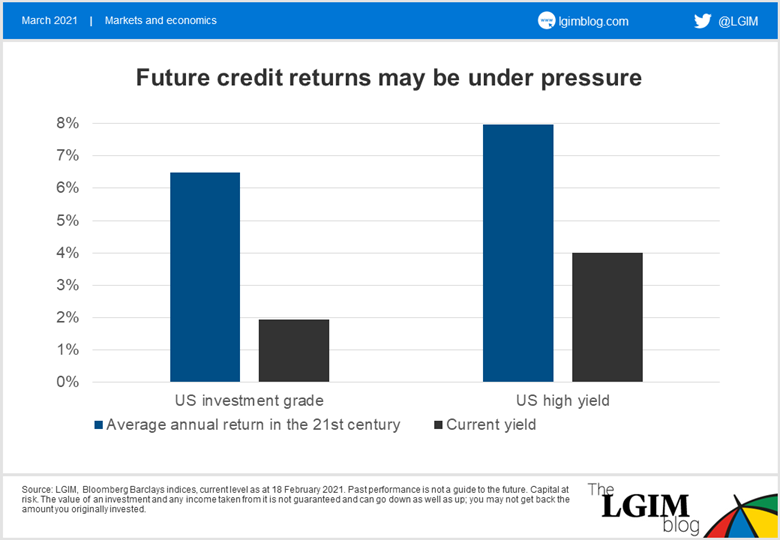 The most optimistic scenario is inflation and growth gradually reducing leverage, improving borrowers’ credit profiles and allowing spreads to tighten while yields are kept low. But inflation will still eat away at your low starting nominal yields. And in a downturn, spreads could widen (without being offset by falling rates that are already stuck at their lower bound).

I’m not painting a pretty picture, but I’d reiterate that credit is not the only asset class facing headwinds. Indeed, as credit sneezes, a lot of other assets with sky-high valuations could catch a cold. So, I wouldn’t necessarily abandon credit and head for inflation-linked assets such as equities. Rather, in my view, we should reassess what low yields mean for investment behaviour, asset-class returns more broadly, and how to replace portfolio hedges. My colleagues will examine these topics in more detail in forthcoming blogs.