What can Eurovision tell us about the bond market?

First it was Cristiano Ronaldo at the Euros, now it is Salvador Sobral at Eurovision. Portugal sits proudly on top of the sporting and cultural pile in Europe. Less obvious victories have been apparent in the rapid improvement in its fiscal arithmetic, and the significant outperformance of its bond m

I know it’s unlikely, but it's just possible that some people may have missed the 62nd incarnation of the delightfully daft Eurovision Song Contest. Twenty six countries slugged it out in the final in Kiev on 14th May. Against a backdrop of glitz and glitter-balls, Portugal finished on top of the pile.

Portugal’s triumph comes hot on the heels of their victory in the European (football) championships last year. It is only a small exaggeration to say that Portugal now stands firm as a European sporting and cultural giant.

I have absolutely no comment on the artistic merits of the winning song (“Amar pelos dias” or “love for two”). I’ve also got nothing to say about the geographical merits of a contest in which Australia counts as part of Europe.

Instead, I thought I would use the opportunity to celebrate another (and often overlooked) Portuguese victory: the rapid recent improvement in their fiscal arithmetic, and the significant outperformance of their bond market.

Since 2014, the Portuguese budget deficit has collapsed from 7% to 2% of GDP

A few years ago, Portugal was on the verge of serious trouble. Investors looked at Lisbon and saw uncomfortable echoes of Athens: high debt, high deficits, weak growth, unstable politics. The latest wave of concerns crested in early 2016 when elections brought a minority government to power, propped up by Communist support.

But, Portugal has kept its house in order. The chart below looks at the improvement in the budget deficit over the last three years for all 26 Eurovision finalists (admittedly not your normal peer group for fiscal fundamentals). Since 2014, the Portuguese budget deficit has collapsed from 7% to 2% of GDP. For sure, that improvement has partly been driven by better European growth and sub-zero interest rates from the ECB. But, none of the other Euro-poppers can match Portugal’s improvement. 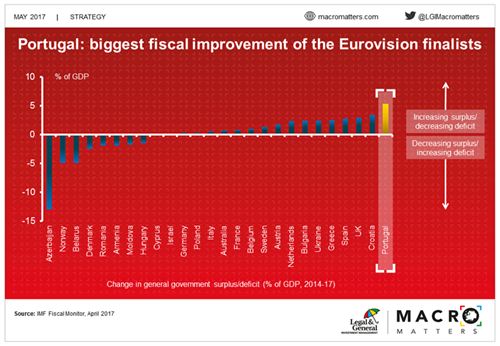 That budget discipline has seen investors in Portuguese debt rewarded (relatively) handsomely. In an environment in which all other major continental bond markets have been struggling, Portuguese sovereign debt has delivered returns above 4% over the last twelve months, as shown in my second chart. 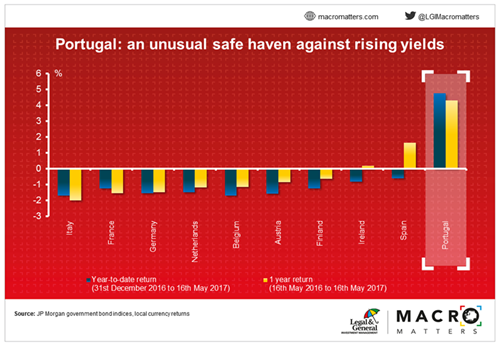 We always need to remember that the past is no guide to future performance. In over half a century of participation in Eurovision, Portugal failed to place in the top 5 before winning this year. Similarly, just because Portugal’s debt has outperformed in the last twelve months, it tells us nothing about potential performance over the next twelve months.

However, there are some important lessons here.

First, the markets will reward improving fundamentals long before the ratings agencies. S&P, Moody’s and Fitch have not changed their Portuguese sovereign ratings since 2015, 2014 and 2011(!) respectively.

Second, when countries have steeply upward-sloping yield curves, you don’t need interest rates to drop in order to earn a decent return. Portuguese yields are almost totally unchanged over the last twelve months: the return has accrued entirely from earning coupons and rolling down the yield curve.

Third, in strange times, “safe havens” can appear in strange places. Nobody is claiming that Portugal is more creditworthy than Germany, but their bonds have offered better protection against upward pressure in European interest rates given the ultra-low level of yields in core Europe. The might continue to be the case as both markets digest the end of quantitative easing from the ECB.

We’ve had a positive medium-term outlook on Portugal since late 2015. The default risk can never be overlooked in a country with a debt-to-GDP ratio close to 130%. There is always a possibility of the market going "boom bang-a-bang". However, the combination of improving fundamentals and a steep yield curve remains a pretty enticing prospect for fixed income investors.