We analyse the prospects of, and implications of, China’s corporate bonds entering global fixed-income indices.

As it stands today, only China’s government and Policy Bank bonds (the latter referring to debt issued by three main institutions – the Export-Import Bank of China, the Agricultural Development Bank of China, and the China Development Bank – and a liquid onshore bond market similar in size to the French government bond market) are included in major fixed-income indices.

Looking ahead, we believe it’s reasonable to expect that, with continued liberalisation of onshore markets, the Chinese corporate bond market could also move towards inclusion in mainstream indices in the coming years.

This is significant as China’s investment-grade credit market continues to grow at a rapid rate, with issuance exceeding government bond issuance over the past two years (as shown in the charts below). 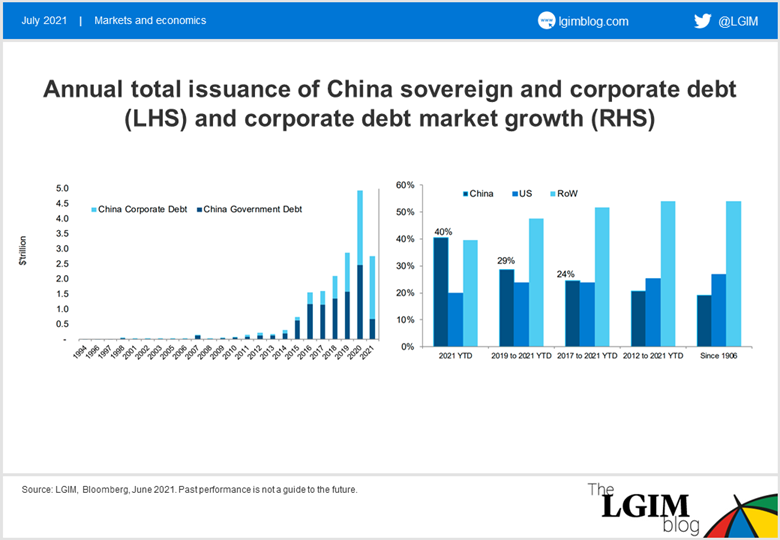 A further sign of progress is occurring with credit ratings. Historically, the main international ratings agencies’ coverage in the local Chinese market has been limited, which has naturally led to concerns for some foreign investors. Fitch Ratings has now secured a licence (the second foreign company to do so) to rate fixed-income securities in China’s interbank market. This easing of restrictions against foreign-owned ratings agencies has been warmly welcomed by global investors, which we believe should ultimately enhance transparency and provide an easier comparison against other corporate bond markets with well established coverage by the largest rating agencies.

So what could this mean for global bond benchmarks? For illustrative purposes, the table below estimates the change in the risk profile of the Chinese Yuan in the Bloomberg Barclays Global Aggregate Bond index if the index was to include China’s corporate bonds. While only a modest increase of less than 1% in overall weight, this could still result in approximately $19 billion of inflows based on estimated assets following the Global Agg index. 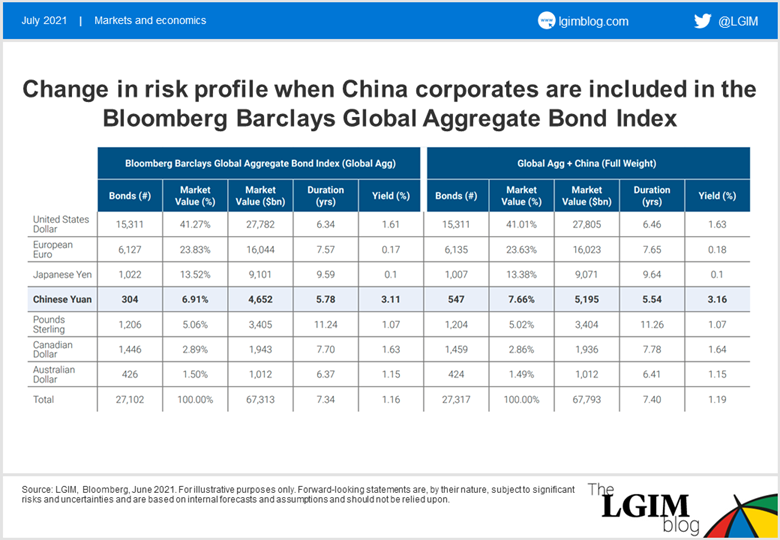 A significant proportion of the universe of Chinese corporate bonds would not currently be eligible for mainstream indices, however. Many, for example, are simply too small to meet minimum issue sizes. But as the corporate bond market progresses towards future inclusion, and foreign investors’ participation increases, in our view issuers would become more conscious of the requisites for a bond to be index eligible, ultimately increasing the potential additional investor base that would naturally have interest in issuance that meets the index criteria.

The practicalities of accessing the onshore China bond market for foreign investors have been greatly improved in recent years, with new access routes such as China Bond Connect and a number of enhancements to the way foreign investors can trade. This has led to China becoming part of many flagship fixed-income indices, with further inclusions expected to drive a significant increase in foreign ownership. Allowing major credit rating agencies to evaluate Chinese issuers is also improving transparency for foreign investors, in our view.

Already one of the world’s largest bond markets by size, the rate of growth continues apace and, looking forwards, we believe it is reasonable to expect that China will become an increasingly large part of the indices in which its bonds reside. It would seem inevitable, in our view, that at some point in the future Chinese corporate bonds will also transition into indices, providing a further kick in country weight. 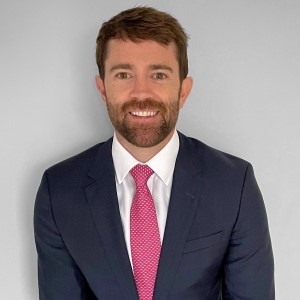 Lee was appointed Head of Index Fixed Income in November 2017. Lee manages a number of LGIM’s fixed income index funds, focusing primarily on emerging market debt in which he has been involved since the inception of the asset class at LGIM. 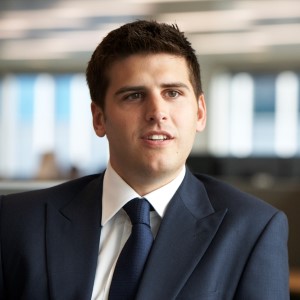