Can mismeasured inflation explain the bond yield conundrum? If inflation is over-reported, then some of the apparent distortion in global real yields simply disappears.

The bond yield 'conundrum' was first mooted by Alan Greenspan in February 2005. He puzzled over why long-term bond yields remained low despite increases in the short-term interest rates set by the Federal Reserve. In more recent years, the conundrum has been distilled into one simple question: “why are interest rates so low?” (see Bernanke, 2015).

One (partial) answer to this question could be that inflation is mismeasured (see James' post on the whys and wherefores). Investors in high-quality government bonds are looking for a store of value that will enable them to maintain the purchasing power of wealth. If inflation is lower than reported, then lower nominal bond yields are consistent with achieving that goal.

The chart below shows an estimate of the global real interest rate available on inflation-linked bonds. In the past few years, it has fallen to zero. This implies that investors get no compensation over and above expected inflation for lending to governments over the long term. 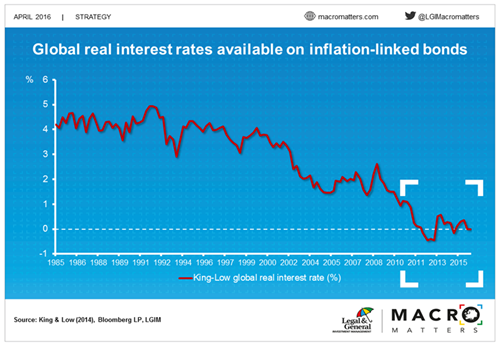 The lack of return potential can plausibly be attributed to the impact of excess savings in Asia and quantitative easing in the OECD. But, it can also be (partially) explained by over-reporting of inflation.

This latter interpretation is especially important when thinking about the potential risks inherent in long-dated government bonds. Some market commentators see government bonds as grossly overvalued with one high-profile investor infamously having described them as “resting on a bedrock of nitroglycerine”.

However, if inflation is lower than reported, then at least some of this apparent overvaluation disappears. Global real interest rates would still be a long way below the levels enjoyed by previous generations of investors, but they would at least be meaningfully above zero.

In that instance, waiting for the once-in-a-generation sell-off in government bonds may be rather like waiting for Godot.

To read more on the potential market implications of inflation mismeasurement, click here.