At times, over 50% of fixed income managers outperform their benchmark indices. Understanding the drivers for that is important for manager selection, but far too often it's attributed to the wrong causes. It's time to pulp the fiction and instead recognise the roles that non-benchmarked investors and new issue premiums play.

Compared with equity managers, a greater proportion of fixed income managers seem to outperform market cap indices. Based on broad, cross-market studies, on average 5-10% more outperform on both a gross and net of fees basis, though there is a lot of variation within individual markets. In a number of credit markets, like US credit, the average manager has actually outperformed the relevant index over ten years to the end of 2016.

All sorts of implausible explanations are used in the media, for example that the illiquidity of credit markets allows managers to perform better on average. That’s nonsense, of course; it might help one type of manager more than another, but as outlined in The Small Cap Anomaly there are only really four broad explanations for the average manager outperforming in the case of fixed income. Two key aspects stand out to me.

Firstly, many insurers and pension funds invest on a buy-and-maintain basis, prioritising diversification and limiting downgrades and defaults over alpha generation and so only buy specific parts of the index. By doing so they systematically underweight the largest issuers and sectors within each credit rating. Those investors’ assets are often missing from the analysis of funds and given they own less of sectors like banks then the funds that are captured must on average own more of those sectors. So if sectors and names that buy-and-maintain investors own underperform the rest of the universe, the average credit manager can outperform. In fact it’s fair to say that a major determinant of how the average does will just be the relative performance of those highest debt sectors, that on average they must over-own. Quantitative easing has worsened this bias as central banks have generally avoiding buying financial issuers like banks. 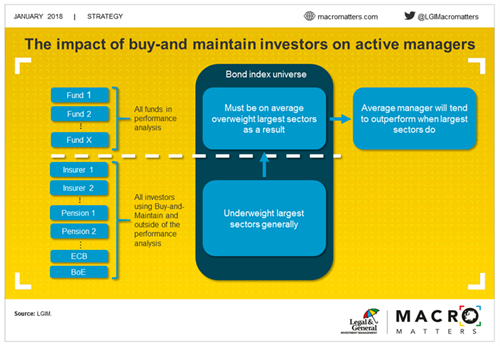 Secondly, unlike most equity indices there are frequent new issues of bonds by companies and governments that enter the fixed income universe. These only enter the relevant indices at the end of the month and so if in general they outperform in the weeks after issuance then that is a source of return available to managers but that cannot be captured in the indices’ returns. Generally there is a small new issue premium, to reward investors for the risks associated with companies increasing their debt and also to retain investors’ support for future issues.

There are other contributors too, such as the potential for managers to buy off-benchmark issues from outside their own universe. However, it is hard to see that being as influential in aggregate as the two aspects above.

By understanding these drivers properly, investors are better able to interpret the facts and avoid the fiction when assessing managers and deciding which managers to select. In our case, the benefits of the new issue premium help support our use of active managers in fixed income, as well as the importance of identifying managers who avoid being overly exposed to the most indebted sectors, despite the greater availability of those bonds.