A reduction in geopolitical risk has eased some of the pressures on the near-term investment outlook, but the economic party is not in full swing.

Is it time to bring out the canapés? On the surface, it looks like it might just be possible for investors to relax as the festive season approaches.

Against the backdrop of supportive global monetary policy and low inflationary pressure, a recent reduction in the negative risks associated with geopolitical issues looks likely to promote a continuation of the benign market environment into year-end.

Looking at this month’s event-risk probabilities, there has been quite a lot of movement on account of the fact that the risks of a no-deal Brexit and escalation in the US/ China trade war have diminished since September. Our economists see the likelihood of a negotiated Brexit as having risen from 55% to 80%, while the chance of a ‘ceasefire’ in the US-China trade deal has also increased, albeit from a lower starting point. 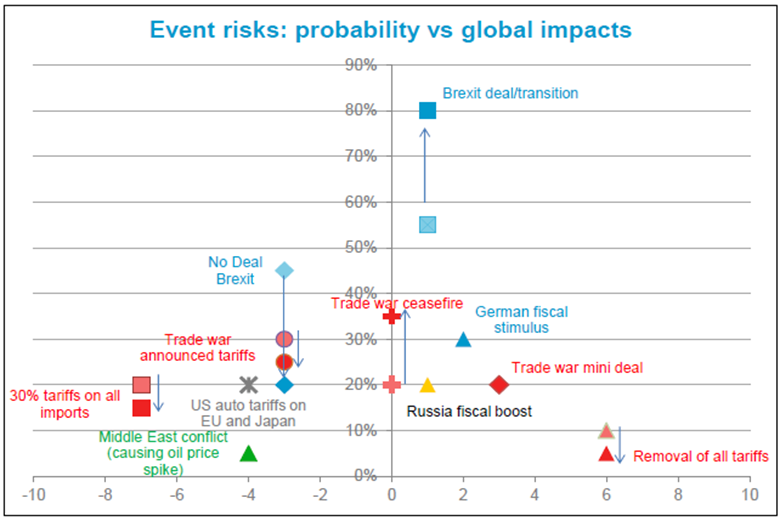 There could even be stronger markets into the end of the year depending on liquidity, if investment banks do not want to reduce the risk on their balance sheets – possibly driving a further rally in riskier asset prices. But generally we think much of the good news seems already to be priced into asset markets: US equities are at all-time highs, credit spreads are tighter and government bond yields have released their grip on their extreme low levels.

However, the improvements may be only superficial: the champagne is fizzy, but it’s lukewarm. The main reason why we are not more enthusiastic about year-end prospects is that the underlying growth picture has not brightened particularly. The chart below shows our updated base-case, global GDP growth forecast in yellow, and for next year it’s still 2.5%. The red recession risk indicators, associated primarily with Brexit and the trade war have reduced slightly, but from an already unfavourable starting point. 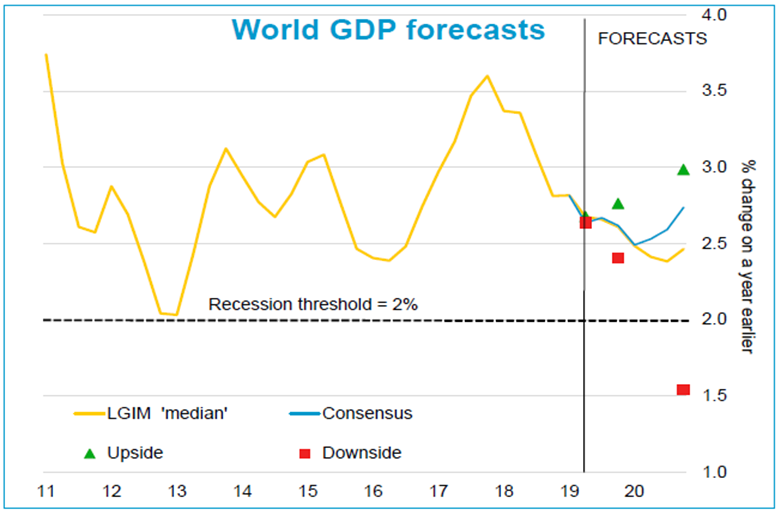 Meanwhile, the third-quarter earnings season has progressed without drama – although earnings growth is flat, the absence of material downward revisions or forward-looking guidance has meant that overall, the corporate backdrop seems stable. Figures have harmonised at roughly 80% of companies beating their estimates, with a corresponding 20% miss.

It is as impossible to construct an outlook that sidesteps the upcoming UK general election as it is to avoid an awkward party guest. What is clear from an investment standpoint, however, is that the need to borrow more and spend on infrastructure is a common theme across the major parties’ election manifestos.

The election could improve clarity on Brexit, but a surge in fiscal spending will raise other questions for investors, such as whether the low level of gilt yields is sustainable and what the impact might be on sterling.  A further point to note is that the Bank of England has flexibility to keep monetary policy supportive.

Overall, we see cause for modest good cheer into year end. But given the fragile economic backdrop and the fact that geopolitical chaos is only a tweet away, we are maintaining a level of caution in our current view. Watch out for our 2020 CIO outlook, in which we will look at how these and a clutch of other issues might move markets next year.