Is consolidation in the European bank sector inevitable?

The performance of many banks in Europe suggests they are destroying economic value. There may simply be too many of them.

Many banks in Europe generate returns below their cost of equity, suggesting that they destroy economic value. This is clearly not sustainable over the longer term and so, in our view, the consolidation of Europe’s banking sector has become inevitable.

Revenues were already under pressure from low interest rates and the response to COVID-19 has only exacerbated this. So, with no visibility on revenues and deteriorating asset quality, banks can only try to control costs to generate earnings.

M&A has been the obvious option for several years, but weak capital positions, corporate governance issues and depressed equity valuations have been significant hurdles. As a result, we have only seen a small number of deals in recent years.

European bank equities have generated poor returns over the past few years, underperforming the wider European equity market by a whopping 70%, as portrayed in the chart below. 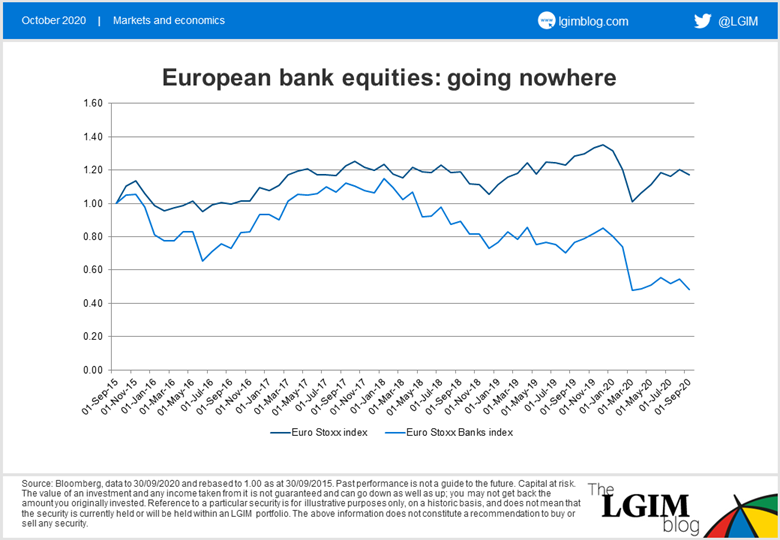 We believe this underperformance is a direct consequence of the low-rate environment in Europe, which has challenged profitability margins. Low growth has also caused a large rise in non-performing loans (NPLs), which have prompted European banks to increase provisions and write down assets.

Lastly, in the hope of maintaining banks’ resilience amid the COVID-19 crisis, the ECB instructed European banks to suspend dividend payments until at least January 2021, a move that credit investors welcomed but was bad news for shareholders.

The catalyst for consolidation

This lacklustre equity performance has set the scene for consolidation to take place in the sector, as challenged entities look to reduce cost in order to improve profitability. However, it needed a catalyst for change and we believe this came not a moment too soon in the form of regulation.

In July, the ECB’s Single Supervisory Mechanism published a guide on the supervisory approach to consolidation in the banking sector, clarifying some positions that we believe will encourage more consolidation and allow banks to cut costs and improve their profitability. In this paper, the regulator confirmed that banks could use badwill to cover transaction costs and top-up provisions and it would not automatically impose higher capital requirements on banks that merge. Previously when two weeks banks merged, the regulator asked them to raise equity in order to strengthen their balance sheets.

With these factors in mind, we believe future consolidation in this sector is more likely to be in-market consolidation, whereby two banks from the same country merge.

In our view, the markets that are most likely to experience domestic consolidation are those that suffer from:

• overcapacity (such as Germany and Italy, where the five largest credit institutions have a 31.2% and 47.9% share respectively of total assets, according to the ECB),

We believe markets affected by these issues include Italy, Spain and Germany.

Recently, we have seen the start of domestic consolidation with Intesa buying UBI, and CaixaBank agreeing a merger with Bankia to create Spain’s largest domestic bank.* Despite the weak macro outlook and uncertainty in banks’ balance sheets, in-market M&A is benefiting from significant badwill that can be used to absorb upfront restructuring costs and additional provisions. Without it, it would be difficult to absorb restructuring charges and maintain regulatory capital levels.

The removal of excess capacity in certain European markets is positive for the banking sector, in our view, as there will be fewer banks with better profitability and stronger balance sheets. We believe it means they will be better positioned to weather the macroeconomic impact of COVID-19.

Dan is a senior credit analyst covering financial institutions in the Pan-European Credit Research team. Dan joined LGIM in August 2011 after spending over five years as Head of Investment Research at Mitsubishi UFJ Trust International where he focused on European and US financials and hybrid instruments. Prior to that, Dan was an equity fund manager at Lloyds TSB Private Banking focusing on insurance, telecoms, utilities and industrial sectors. His previous professional experience includes roles in equity research and engineering. Dan holds an MBA from Rotterdam School of Management (Erasmus University) and a BSc in Computer Science, Statistics and Operation Research from Tel-Aviv University. He is a CFA Charterholder. 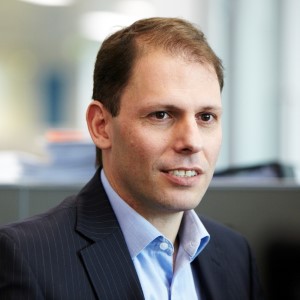