Giving thanks for duration

‘Tis the season for giving thanks, at least in the world’s largest economy. But after the market routs of the last month – driven by US stocks, no less – there is precious little to be grateful for in some commentators’ eyes. Enter duration, which has been helping to give the protection we all crave, so long as you’re long, that is…

Each time there’s a major market event, it’s hard to beat the industry pundits’ blink-and-you’ll-miss it rush for a clichéd title. I thought I would scream if I read another Red October or submarine-themed account of what was undoubtedly a torrid month for most assets — and so I decided to get a nod in to the Founding Fathers early, before the Thanksgiving turkeys become truly unbearable.

Bond bears have had (another) frustrating year. After their hopes were raised again in late October/early November, yields have broadly fallen to where they started the year. Something to be thankful for, as America’s Puritan festival approaches. As a reminder, the £19.25bn 6% 2028 issue (10-year gilt) opened the year at 1.34% and is now trading below 1.30%, as I type at 4pm on 15 November, but will most likely be different by the time you read this — although I am not clever enough to tell you which way, or by how much!

Fears of simultaneous equity and bond bear markets remain understandable, but much-maligned fixed income continues to offer some protection in our view — as it should. It might not have delivered as much as some would have liked, but protect it has…as long as they have embraced duration. Yes, investors would have been better off in gilts, but even as spreads have widened, investment grade credit has helped to safeguard them. 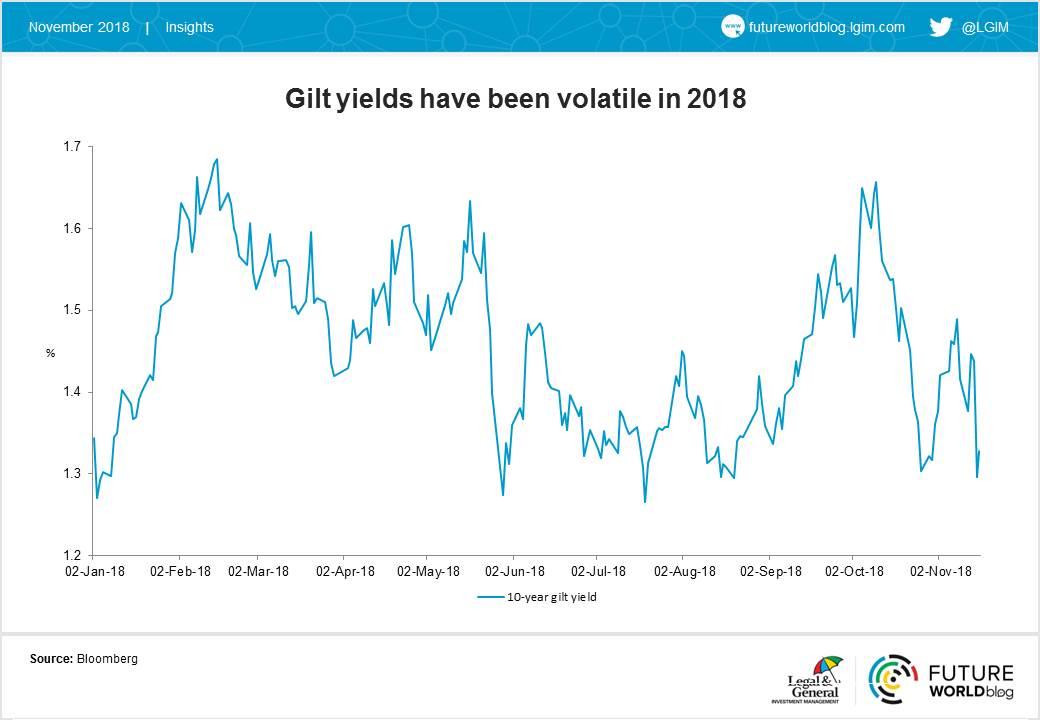 It has been a volatile year, as you can see above. We’ve seen sharp rises and falls in yields, as concerns about Brexit, Italy, and trade wars have waxed and waned, but it looks like yet another year where the bond bears will be disappointed, after bouts of self-congratulation that their time had finally come. Can UK yields rise again from here? Absolutely, especially if there is a 'good' Brexit deal outcome. In any case, we still believe the extent they can head north is limited by a debt laden economy and a vulnerable housing market. Weaker-than-expected UK retail sales data today, even as wage pressures seem to be rising, won’t help either!

What of credit? Well after a strong start, credit has underperformed government bonds, and spreads widened pretty consistently: as shown below. Valuations still feel stretched, as the era of extraordinary central bank-buying comes to an end. Euro-denominated corporate bonds have fared the worst, with US dollar credit catching up recently. Until recently, high yield had maintained a positive total return over the year, but that has now evaporated too, as oil prices have had a mini collapse; falling 25% since early October. Luckily, sterling investment grade is clawing its way back to being flat for the year, as yields have recently fallen.

Recent equity stability helped to calm credit spread volatility, but that evaporated quickly. The run into year-end traditionally has offered seasonal support in sterling credit. With healthy redemption and coupon payments, this could be a source of welcome stability, though it may not mirror the strength of 2017. However, our longer-term concerns remain, and whilst we have been happy to add risk selectively, our overall defensive stance remains. The festive spirit is not quite upon us!

Mark is the Head of Pan European Credit with responsibility for sterling and euro investment-grade credit teams. He is the lead fund manager on the sterling flagship retail funds. Mark joined LGIM in 2014 from AXA Investment Managers where he held the title of Head of Credit, UK. Mark was closely involved with AXA’s successful entry into the buy and maintain credit strategy as well as delivering above-target performance on a range of segregated and annuity funds. Prior to that, he was at the Royal Bank of Canada in a variety of senior capital market roles, latterly as Managing Director, Head of Syndicate and European Debt Capital Markets. Mark graduated from the University College of North Wales with a BA (hons) in Economics in 1984 and from the University of Bradford Management Centre with an MBA in 1985. He also holds the Investment Management Certificate.