Gilt market outlook: all that glitters?

We reappraise gilt markets following the substantial yield increases in early 2021, and look at the risks and opportunities that lie ahead.

Government bond markets have stabilised in recent weeks after the remarkable selloff in the first quarter. Confidence in the economic recovery has grown as a result of the deployment of additional fiscal stimulus, most notably in the US, and the impressive rollout of the vaccination programmes across the developed world.

As the UK economy takes the first steps on its path to normalisation, we have been looking at the shifting dynamics in interest rates and inflation markets, and the implications for defined-benefit pension schemes in the year ahead.

The Bank of England announced a reduction the pace of its asset purchases in May, as was largely expected, given its previously stated intention for asset purchases to run until the end of the year and to reach a total size of £895 billion.

In forthcoming meetings, we also expect to hear more about the Bank’s normalisation principles, with Governor Bailey having suggested that a reduction in the size of its balance sheet may be considered prior to interest-rate hikes. At the very least, we would expect the level of Bank Rate at which the Bank of England will begin unwinding the balance sheet will be brought down from 1.5% to around 0.75%-1%, reflecting the new lower bound and lower neutral interest rates.

Whilst the Bank of England’s quantitative-easing programme continues to be a key source of demand for government bonds, issuance is expected to remain relatively robust. The Debt Management Office (DMO) indicated a £43.3 billion reduction in its expected gilt issuance over 2021-2022, but that still remains the second-largest gilt remit in history, at £252.6 billion.

The uncertainty over the outlook after the initial reopening makes the exact timing of rate hikes and tightening more difficult to predict, although the low level of neutral rates is likely to keep any potential tightening modest, especially if the Bank of England does reduce the level of Bank Rate at which it starts shrinking its balance sheet.

Where appropriate, we will look to exploit tactical trading opportunities within the recent yield range, though we remain alert to the risks that could cause yields to move outside this range. Upside risks to yields stem from a stronger-than-expected recovery, which could cause a build-up of inflationary pressures and lead to increasing expectations of a tightening of monetary policy. However, should there be any longer-term scarring on the economy, it may still be some time until output gaps are closed and central banks may remain dovish for longer than expected, which would likely lead to a decline in yields. 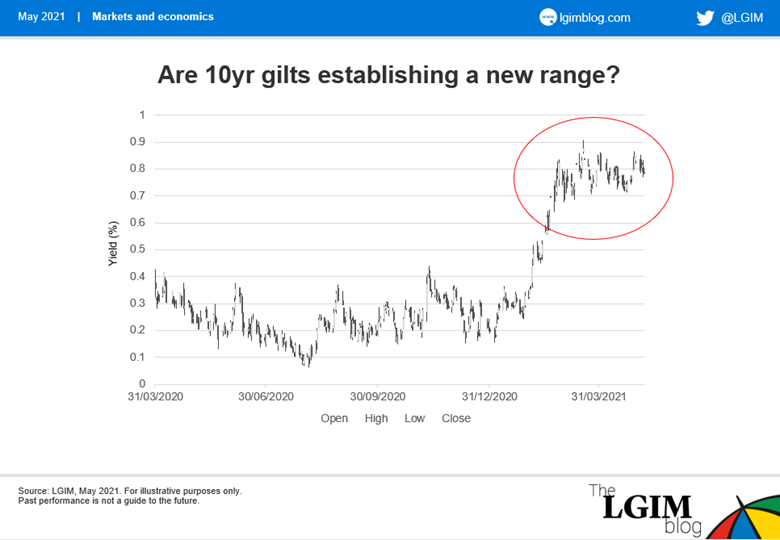 Market-based measures of inflation expectations continue to look high to us when compared with the Bank of England’s target, but the demand for protection against inflation continues to be robust. The improvement in funding ratios for pension schemes, given the strong performance of risk assets and the increase in yields, is likely to encourage de-risking. The DMO has reduced its planned issuance of index-linked gilts in the current financial year from £32.7 billion down to £28.4 billion, following the April update to the March budget projections. We continue to hold an underweight position in UK inflation markets given current valuations, although the imbalance between supply and demand is likely to keep inflation markets relatively expensive.

Gilts are at historically expensive prices compared with swaps, as the low costs of financing have made buying gilts on repo cheaper in comparison. However, looking forward, there are reasons to believe that this may not persist. As the Bank of England tapers its purchases and brings quantitative easing to a close later in the year, the market will have to absorb greater levels of gilt issuance.

Whilst the fiscal deficit is projected to decline, the ongoing need to refinance maturing gilts is likely to mean that gross gilt issuance remains at relatively high levels. Should the Bank of England look to stop the reinvestments of maturing gilts in its quantitative-easing portfolio, or even potentially actively sell its gilts, this would place further pressure on the gilt markets. Where appropriate, we have taken advantage of the relative decline in gilt yields versus interest rate swap rates in portfolio positioning.

We do not expect a significant move in yields until we have more visibility on how the economic recovery is taking shape after the initial post-lockdown boom. UK inflation markets continue to price in a significant premium to the central-bank target, although the strength of demand may keep valuations above fair value. We continue to seek opportunities by taking relative value positions in gilts and inflation-linked bonds against their derivative counterparts.

*IOTA –the difference between an index-linked asset swap and a nominal asset swap. 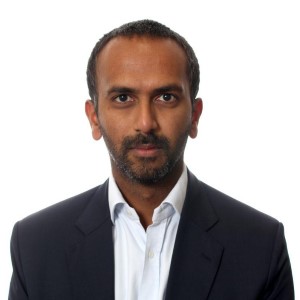