From the new normal to the new Norman

Inflation fighting is back. Is unemployment set to spike as a result? From the pound’s exchange rate to how gilts and small-caps will perform, this might not be like previous rate-hiking cycles.

In May 1991, Norman Lamont (then UK Chancellor of the Exchequer) said “rising unemployment and the recession have been the price that we have had to pay to get inflation down. That price is well worth paying.” Adding an unfortunate regional spin in October 1998, Eddie George (then Governor of the Bank of England) got himself in hot water for agreeing that job losses in the North of England were an acceptable price to pay for curbing inflation in the South.

Politicians and central bankers are unlikely to express themselves in such stark language today, and for many years they haven’t had to even think in those terms. But, to quote Bob Dylan, “the times they are a-changin’,”  and we believe they are a-changin’ most rapidly in the UK.

The Bank of England is pivoting towards a clear focus on supply-driven risks to the inflation outlook, moving away from their practice of leaning against the winds of aggregate demand. The key questions are whether Governor Andrew Bailey shares Lamont’s sentiment in accepting rising unemployment to (re)establish the BoE’s inflation-fighting credentials – and, if so, what are the likely market impacts?

The repricing at the short end of the UK yield curve has been dramatic. In the last 2 months, we’ve seen the front end of the GBP yield curve move around 50 basis points higher. That’s been pushed along by hawkish rhetoric , with the new BoE chief economist, Huw Pill, opining that November should be considered a “live” meeting, and Governor Bailey arguing that the bank “must act.”

It’s the most rapid tightening of monetary conditions in the last 13 years, as the following chart shows. 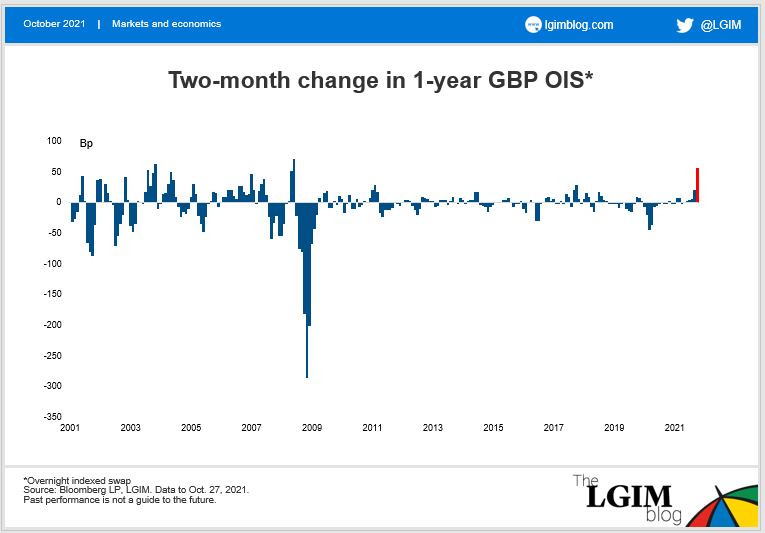 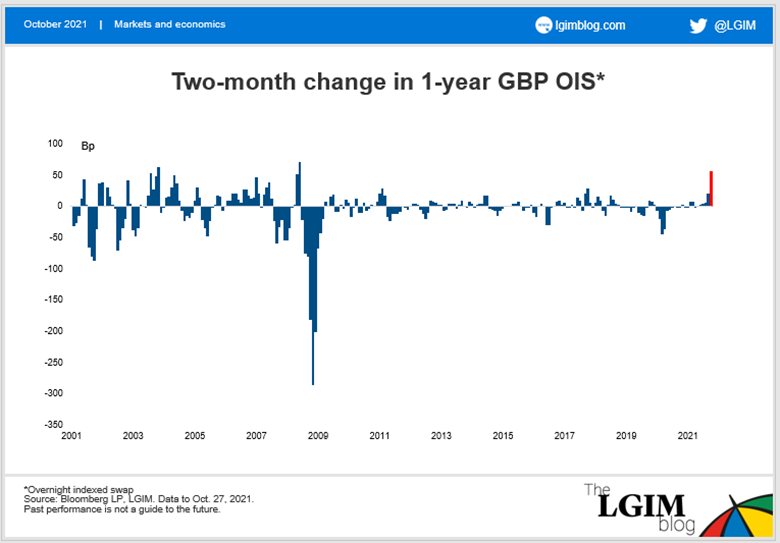 We can work out how much the BoE thinks that tightening will impact the labour market by looking at its past forecasts. Since the pandemic started, the difference between their constant interest rate and market interest rate forecasts provides a good guide to the interest rate multiplier it’s using.

As the next chart shows, it is remarkably close to 1:1. And since the pandemic began, the BoE’s forecasts are consistent with a view that a 50 basis point increase in short-term interest rates maps directly into a 50 basis point increase in the unemployment rate. With a UK labour force of nearly 35 million, that’s equivalent to around 175,000 people losing their jobs. 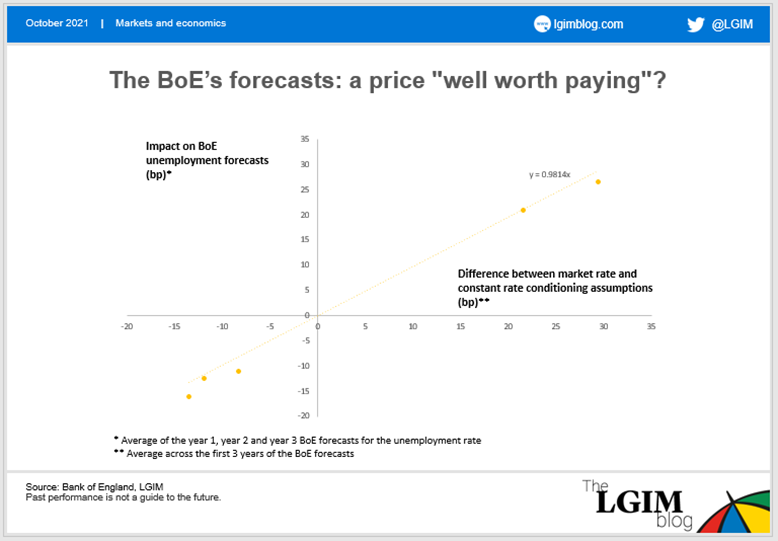 The last two months have not seen an interest rate response driven by stronger aggregate demand: we’ve had a weak GDP figure in July/August despite “freedom day” supposedly providing an uplift to growth, a return of COVID concerns in recent weeks, and sagging consumer confidence.

Instead, we’ve seen growing evidence of an adverse aggregate supply shock: just look at the short end of the UK inflation curve, where investors’ expectations of average inflation over the next two years has moved a staggering 150 basis points since early September.

The labour market is already likely to come under pressure as higher gas, electricity and petrol prices leave consumers with less to spend on the high street. We also have frozen tax thresholds, increases to national insurance contributions, the end of furlough and the expiry of the universal credit uplift. Now we can add an interest-rate shock.

So is higher unemployment a price “well worth paying” to keep inflation under control?

Fortunately for us, that’s a call that policymakers rather than humble investors must make. We instead are focused on the consequences for sterling, gilts and the equity market.

For sterling, short-term interest rate differentials with Britain’s major trading partners have historically been one of the most important drivers of volatility. But that is a history dominated by aggregate demand shocks, in which increasing short-term interest rates were a proxy for improving growth prospects. That is not true today.

The implication is that we need to think beyond the econometrics that tell us rising interest rates and rising exchange rates go hand in hand. We have recently closed out a tactical overweight position in the pound,  despite the BoE’s pivot.

For gilts, raising rates to counter an aggregate demand shock has led to a marked flattening in the yield curve. It’s not particularly fruitful to get into the “Is this a policy mistake?” debate, as it all depends on the weights placed on inflation and unemployment in a social welfare calculation. However, we can say reasonably confidently that the more a central bank frets about inflation, the less the bond market needs to worry about inflation spinning out of control. We are long gilts relative to the US and Germany, despite the upward pressure on the short end from the policy U-turn.

The FTSE 100 has underperformed North American and Western European markets so far this year, but this has much more to do with its unusual sector composition rather than its exposure to UK plc. As the BoE pivots, it is notable that the FTSE 250 is struggling relative to the large-cap index. That’s consistent with the idea that the market is readjusting expectations for companies with the most domestic exposure.

The rules of thumb adopted by the market over previous tightening cycles -- sterling rallies, gilts underperform and small-caps thrive -- all need to be questioned. The times they are a changin’.