A little like the world depicted in the Lewis Carroll classic, the impact of a Brexit shock on the sterling investment grade credit universe might be the opposite of what investors think it should be.

There’s something about the UK's divorce from the EU that often reminds me of Through the Looking Glass, a world where some see the exact opposite of what others would have them see, and where all claim their opponents believe six impossible things before breakfast.

But when uncertainty, claim and counterclaim dominate the headlines, close examination of the facts available remains crucial. And in the case of sterling investment grade credit, a little like the Lewis Carroll classic itself, the impact of a Brexit shock on the index might not be what you’d think, largely because the sterling investment grade credit universe might not be what you think it is either.

This is because when looked at in terms of revenue, the UK’s largest and deepest pools of corporate capital are not particularly exposed to the UK economy itself. A recent study from FTSE Russell*, for example, showed that around 75% of the FTSE 100 index's revenues come from abroad. What is perhaps less well known is that the sterling investment grade universe is similarly global in nature.

While the FTSE 100 began a sharp rally in the weeks after the EU referendum as investors grew to appreciate the benefits that a weaker currency would bring to an index generating around 75% of its revenues in overseas currencies, some sterling credit market investors have perhaps been slower to fully appreciate the similar dynamic at play in their own market. Rather, the rally in sterling credit that gathered steam in the second half of 2016 was attributed mostly to the efforts of the Bank of England to support the market with a £10 billion corporate bond-buying programme – itself hardly a vote of confidence in improving fundamentals. 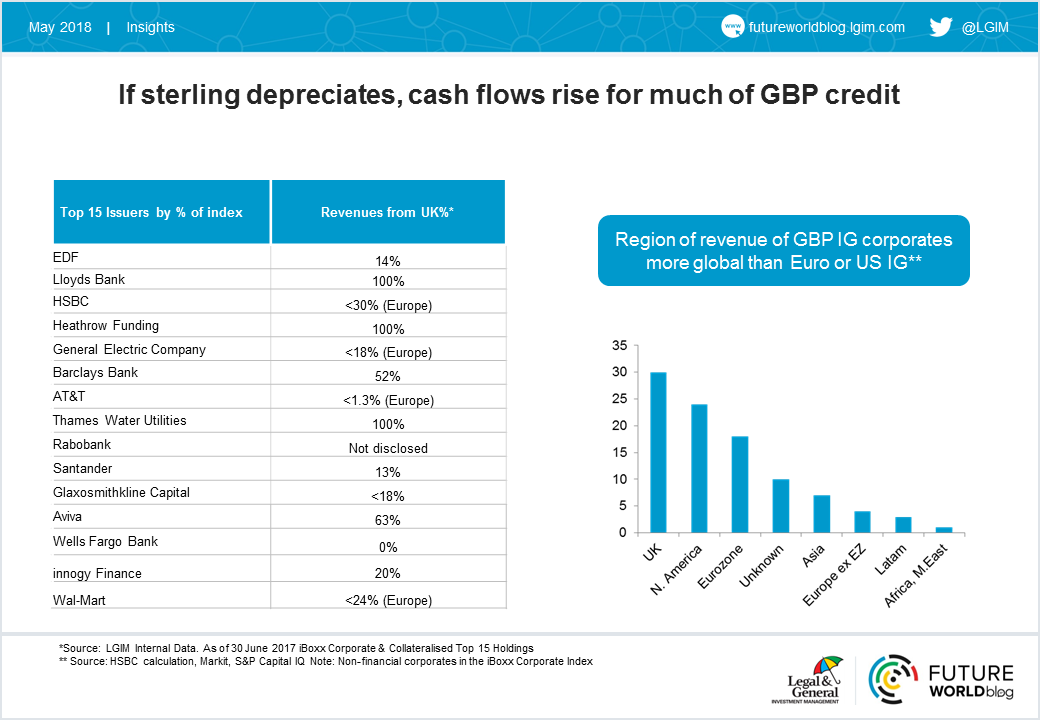 But as the chart above shows, around 70% of the revenue from true ‘corporate’ bonds (i.e. not banks or other financials) in the sterling universe comes from overseas. This means that if sterling were to fall again in the future, the ability of that 70% of the sterling corporate universe to pay their sterling-denominated coupons would rise rather than fall – a useful point to bear in mind should negativity surrounding the outcome of Brexit negotiations reach a peak.

This doesn’t mean, of course, that sterling corporate bonds are immune from Brexit concerns, and clearly the more domestically focused sectors face headwinds from higher costs of imports and potential pressures on wages, should the labour force become more restricted.

Furthermore, the desire of international asset allocators to reduce their exposure to political uncertainty could no doubt once again exert negative pressure on sterling corporate bond prices, as could action from the credit rating agencies, should they deem any final divorce deal bad for the UK’s creditworthiness.

But in the event sterling begins to fall as rating agencies downgrade the UK’s prospects and international buyers fear the worst, it will remain true that the UK’s outlook is not the same as that of the sterling corporate bond markets. In fact, to the extent that they are connected via the currency, they appear to be inversely correlated. Should panic set in once again, this knowledge should prove useful for the investor looking for opportunity, where others sense fear. And even if a Brexit panic does not present the brave with a future opportunity, a greater understanding of the true nature of the UK’s corporate bond market is still no bad thing.

Ian manages LGIM's sterling credit investment grade portfolios and is lead manager for the over ten year strategy. Ian joined LGIM in 2004 and has previously worked for Insight Investment and Aviva Investors.