What recent shifts in the energy sector may mean for credit investors.

A black swan has appeared in the energy sector, as S&P revised its industry risk assessment from ‘Intermediate’ to ‘Moderately High’, followed by a series of ‘Negative Credit Watches’ and ‘Negative Outlooks’ for individual issuers.

Broad shifts in rating methodologies or changes in industry risk assessment are in many ways proverbial ‘black swan’ events for corporate credit markets. Often, these come with little advance warning and have a significant impact on credit ratings and spreads. Credit investors in the energy and resources sectors will still have fresh memories of the 2016 “Moody’s Massacre”, whereby a recalibration of risk assessment to reflect rising commodity price volatility precipitated a storm of downgrades across both industries. Likewise, hybrid investors live in constant fear of a rating methodology change triggering the par call embedded in standard hybrid prospectus language.

As justification for the changes to energy sector ratings, S&P cited the “increased environmental threat posed by greenhouse gas emissions, evolving government policies and emission standards, and the rising role of renewables in the energy landscape supported by its cost competitiveness”, as well as “heightened investor demands to focus on ESG, which may make future market access more challenging”. We find little argument against either of these concerns, and in the case of the latter the rating changes will be somewhat self-fulfilling.

Regular blog readers will be acutely aware of the rising importance of ESG considerations in the investment process. Rating agencies have likewise endeavoured to incorporate ESG factors into their rating processes, but this is perhaps the clearest example to date of ESG considerations having a direct impact on ratings and spreads. Investors still asking whether ESG factors translate directly into asset values and investment performance need look no further than this development. We expect material ESG factors will become increasingly priced in to markets, especially as it relates to climate change.

One criticism of S&P’s approach is that it fails to differentiate between energy companies that have made strategic commitments to adapt their businesses to a low-carbon world and those staying the course. A structurally challenging outlook and sharp declines in energy equity valuations suggest increasing reliance on debt funding to finance energy transition initiatives, which puts rating agencies in a powerful position to affect the cost of capital. Increasing the cost of capital for companies that fail to commit to or deliver on climate policy is a necessary component for de-carbonisation, but penalising the entire industry also hampers the efforts of companies that have committed to grow their renewables businesses and shrink their carbon footprint.

Based on the nuances of S&P’s rating methodology, we expect the most significant changes will come at the upper end of the credit spectrum within oil and gas. Shell*, Exxon* and Total* were among the issuers placed on ‘Credit Watch Negative’, suggesting at least a 50% chance of negative action within the next three months. Some of the affected companies are at the industry forefront in terms of decarbonisation ambitions, while lower-quality issuers that remain focused on fossil fuels appear to have emerged largely unscathed.

We highlight some of the rating changes in the table below, which illustrates where S&P’s methodology would map based on the revised Industry Risk score, all else equal. We expect the final rating impact may ultimately be more muted than implied by the change alone due to company-specific mitigating factors. It’s also worth noting that S&P’s oil-price assumptions for 2020 and 2021 appear conservative compared with realised and current prices, which could further mitigate negative rating action. As such, the implied ratings should be viewed as worst-case scenarios for final ratings, apart from BP* which has had ratings affirmed with a negative outlook. 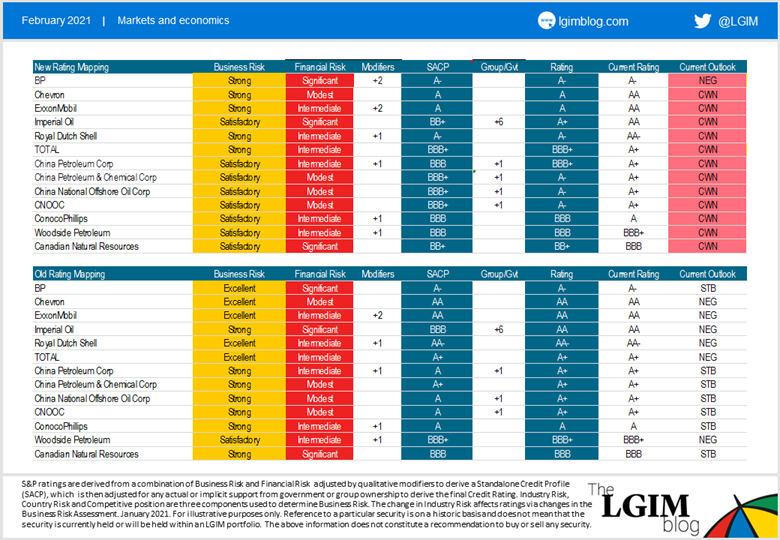 While we expect S&P’s downgrades are likely to be limited in scope and breadth, the change effectively opens the bidding for other major rating agencies to follow suit. As S&P tended to rate higher-quality energy names more conservatively even before this change, sector-wide downgrades from the other two agencies would have a larger effect on composite ratings used in various credit indices, which could in turn create technical selling pressure and cause a larger negative impact on spreads.

For the oil and gas sector, we’ve seen our first black swan less than one month into 2021: the question is whether it’s flying solo, or simply the first in the flock to arrive.

Court Gilbert is a Senior Credit Analyst with responsibility for covering basic materials, energy and construction materials. Court joined LGIM in 2015 from Allstate where he held the title of Senior Credit Analyst with responsibility for covering investment grade and high yield metals and mining, homebuilders and building products as well as investment grade autos and transportation across developed and emerging markets. Prior to joining Allstate’s credit research team in 2008, Court worked in the Commercial Mortgages group. Prior to joining Allstate, he spent over two years as an auditor for Reznick Group PC (now CohnReznick), a US-based public accounting firm. Court graduated from Wake Forest University with a B.S. in Finance and M.S. in Accounting. He holds an MBA with honors from the University of Chicago Booth School of Business, is a certified public accountant and CFA charterholder. 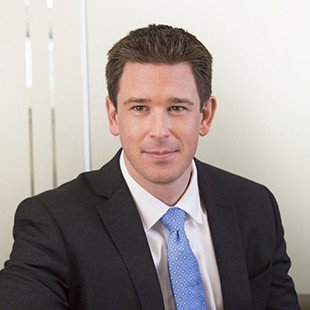