Why our portfolios have taken the EUxit route

We have moved underweight Eurozone equities given the range of risks facing the region.

World leaders gathered in the French city of Biarritz recently for the G7 meeting, but we in the Asset Allocation team went the other way and moved our portfolios away from Europe.

The investment case for going underweight Eurozone equities across most of our portfolios is fairly straightforward. European stocks have performed relatively well this year: they outperformed in the first quarter, traded in line with their global peers during the second quarter, and have only given back very little of their outperformance over the past few weeks.

But over the same period, our macro views on the region have significantly deteriorated. So that has left us facing the combination of higher prices for European equities and lower expectations for the region’s macro backdrop, a poor mix.

The range of risks for stocks in Europe is pretty broad. Hetal Mehta, our senior European economist, puts the probability of a Eurozone recession at around 40%. The likelihood of a no-deal Brexit has also increased, with news that the British government is seeking to suspend parliament, which in most cases would also push the Eurozone into recession. The risks to our base-case Eurozone forecasts, therefore, have become heavily skewed to the downside.

Even leaving aside the chances of a domestic recession in Europe, we have long held the view that the Eurozone would be one of the most vulnerable regions in the world to an economic downturn. This would reveal the structural issues that worried markets in the past, such as a lack of central-bank firepower and the continent’s institutional challenges in responding quickly and decisively to a crisis.

All of the above would be manageable if the valuations of Eurozone equities were unusually low and/or sentiment was particularly bearish. Neither is the case today, though.

Valuations for European stocks, relative to other developed markets, are close to their historical averages (see chart below). Sentiment surveys may suggest that Eurozone equities are far from everyone’s favourite, but they are in line with the unpopularity of UK and Japanese stocks and so don’t stand out as offering an attractive discount. 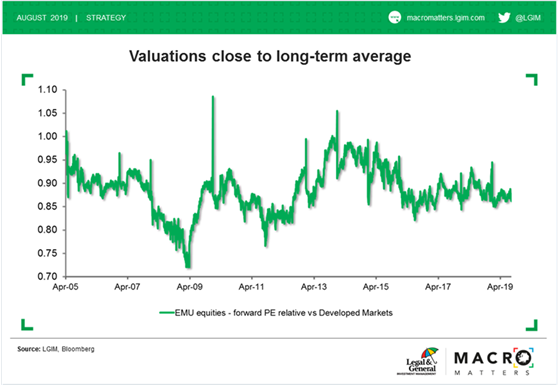 We must, however, acknowledge that there are some risks to our underweight position in Eurozone equities. Other than that we are simply being too pessimistic on the dangers of a recession striking, the European Central Bank could unleash a ‘big bazooka’ policy surprise.

Then there is the possibility of a sector or style rotation out of the areas the Euro Stoxx index is underweight (namely technology) and into its overweights (autos, financials). If this occurs, European equities would benefit relative to other markets. A rebound in purchasing managers’ indices (PMIs), on the other hand, should not disproportionately lift Eurozone equities if it is of a global nature as other regions would respond favourably too.

It is also worth noting that Eurozone equity benchmarks are no longer dominated by banks, which should temper European gains if this rotation from technology to cyclical sectors or value stocks does transpire. Back in 2006, banks comprised 23% of the index and were 2.5 times bigger than the next-largest sector. Today, they have only an 8% weight and are a third smaller than the largest sector.

On balance, we are therefore comfortable coming back from Europe as the summer ends.