Spring has sprung but for many investors and financial advisers there’s still a chill in the air. The performance of UK active managers is once more in the spotlight and yet again threatens to reignite the active versus index debate. This time it is S&P Dow Jones which highlighted that nearly nine out of ten UK equity funds sold in Europe lagged behind their benchmarks in 2016.

Wait, wait, wait… before my phone starts ringing off the hook telling me to get off my index high horse, I do think an understanding of the recent underperformance is necessary. To do this let’s look a bit closer to home at the IA UK All Companies sector, where the average UK equity manager delivered underperformance of over 5% in 2016, as can been seen from the table below. This needs to be put into context though!

Actually, over the longer term UK equity fund managers have performed much better than other regions in delivering above benchmark returns. So…what could have caused such a deviation in 2016? The answer: sterling. 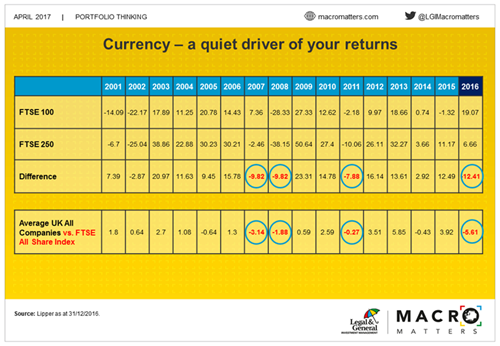 Following the vote to leave the European Union in last year’s referendum, the relative price of sterling took more dives than a second-rate footballer. It quickly transpired that when faced with such a shock, the large-cap FTSE 100 would be likely to fare much better that the mid-cap FTSE 250 since 80% of its underlying company earnings come from overseas. In comparison, revenue for the FTSE 250 is split broadly evenly between international and domestic. The mid-cap UK sector is therefore far more exposed to cold winds of currency weakness than the large-cap dominated FTSE All Share.

The root cause of the issue for the active sector is that there is an inherent bias towards small and mid-cap companies. Mega-caps dominate the FTSE 100 and All Share, with the top 10 stocks making up over 40% of the total market cap of the index. This means active fund managers are forced to look for businesses smaller than those at the top of the pile in order if they want to run a well-diversified portfolio. This leads to the FTSE 250 driving much of the average fund manager’s outperformance versus FTSE All Share meaning that when the performance of those two diverge, active funds are more likely to align with the former than the latter. The table above shows that whenever you get large underperformance of the FTSE 250 – circled in red – the average UK equity manager struggles.

If we look at the performance of these sectors over 2016, we can see that the blue line, the FTSE 100 (large-caps) dramatically drops following the referendum, but not to the same extent as the red line (mid-caps), largely down to currency effects. The clear divergence between the two continues for the rest of the year and it was at this time the average fund manager started to underperform the index.

If the pound strengthens, then we might see a reversal of fortunes but the past twelve months have shown just how exposed the IA UK All Companies sector can be to sterling weakness. When choosing any funds for their portfolio, investors should always try to be aware of the currency risk they may also be taking on.

Justin secretly pretends to be a rockstar as he travels around the country promoting his funds with his signature red tie, and was even chased across a field by some fans (dogs) as he went for a run one evening. When he’s not in the office squinting intensely at his fund spreadsheets or into a camera, Justin dedicates time to his true love: Manchester United, and catches up on the latest Netflix series on the side.