Top 5 on the Earnings Season

The earnings season will deliver an enormous amount of newsflow. This one is shaping up to be unusually interesting. Here is a quick guide on what to expect and what to look out for from the macro perspective.

It’s difficult to keep up with baseball from this side of the pond! But when baseball's season openers happen across America it’s a sign that winter has truly ended (if not in the seven kingdoms). And just like the first games reveal which way a team's fortunes are heading this year, it’s also the time of year when we find out just how (un)realistic earnings expectations really are.

Over the next few weeks, analyst forecasts for 2019 earnings will for the first time be compared with reality: the 2019 earnings season opener.

The first quarter will be (and was always going to be) one of sharp deceleration. US earnings growth is likely to drop from far above trend levels to a bit below trend, or in numbers: from 15% to just barely in positive territory. By far the biggest driver (about 2/3) of the slowdown has been last year’s tax cuts falling out of the year-on-year comparisons. But the deteriorating macro backdrop has also contributed. Much weaker PMI data point to a softer economy. Add to that the headwind from a stronger dollar and a lower oil price and the sharp deceleration becomes very understandable.

The good news is that expectations have also been cut sharply. Bottom-up analysts' forecasts for 2019 EPS growth sat at 9% when equities started their sell-off in October, but estimates have since been cut to only 3% growth. That is a number we feel much more comfortable with and is close to our own top-down expectations. So if our macro view of the world roughly plays out, then we would expect no further material downward pressure on analysts’ earnings forecasts. It’s a similar picture for Q1 results. Analysts (almost) always cut estimates into the reporting season, but this time round the knives seem to have been unusually sharp.

We expect slightly positive earnings growth in the US. Analyst expectations come into the earnings season at -2.5%, but we (and the market) know that companies tend to manage analyst expectations down to a beatable level. Adding back the historic average ‘beat’ gives +1% as a more realistic target. Not particularly impressive, but at least not negative.

The details are better than the headline. The deceleration to barely positive growth will rightly get a lot of attention, but it’s worth flagging several encouraging details that suggest the real picture is more benign than the headlines suggest. Revenue growth is expected to remain a healthy 4.5%, above the 2011-2017 average. Also, having been boosted by outliers on the upside, this quarter the headline numbers are dragged down by some large cap outliers. The median S&P 500 company is expected to deliver earnings growth of 5%. 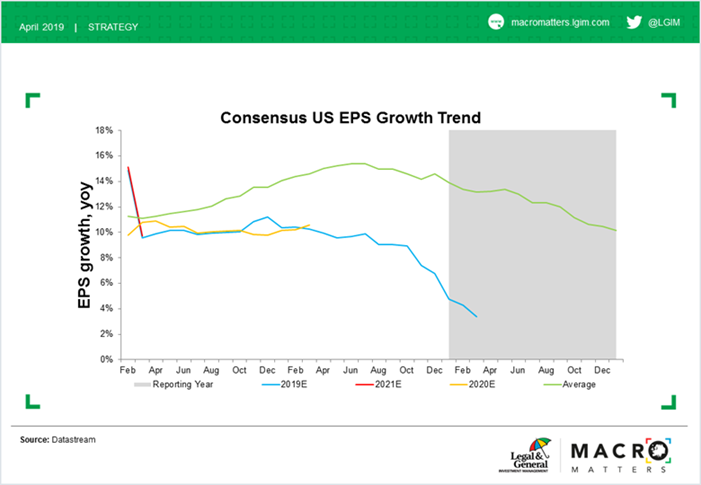 The key thing we hope to get out of the earnings season is confirmation that the sharp earnings downgrade cycle of the last six months is ending. There are some encouraging signs on that front in the form of earnings revision ratios having come off the lows, largely positive surprises from early reporters and a stabilisation of PMI data. A reporting season that is in line with or slightly ahead of expectations would go some way to reducing the tail risk of another wave of earnings downgrades.

Overall, I think earnings growth expectations have adjusted to relatively reasonable levels and if the earnings season confirms this scenario it should be modestly positive for equity markets.