US profits are booming, but could be set to change radically. We believe that an earnings recession is almost inevitable in 2020, even if the US Federal Reserve (Fed) can engineer a soft landing.

Markets have been volatile during the third quarter corporate reporting season, but S&P 500 earnings growth over the last year is likely to finish near 25%. Few expect the current strength to persist, but perhaps questions are starting to emerge about the previous optimism around future profits. We recently updated our whole economy profits models. Despite being constructive on the near-term growth outlook, they are flashing warnings about the direction for future profits.

The analysis finds that the tax cuts and oil price recovery are masking an underlying deterioration in US margins. Furthermore, while the fiscal stimulus is boosting growth and profits today, it is probably making the future profits outlook worse by overheating the economy. Once the economy moves above its potential growth rate, this is a double whammy for future profits. First, labour costs tend to rise more rapidly as unemployment is unsustainably low. Second, it requires a sharper slowdown to restore equilibrium and this change in momentum catches out companies, at least initially, given their fixed costs.

An important late cycle warning sign is the growing gap between S&P 500 earnings and whole economy profits in the national accounts (NIPA - one of the main sources of data on general economic activity). S&P 500 earnings have tended to outstrip NIPA profits towards the end of each cycle, only for companies to ‘kitchen sink’ (i.e. wash out all of the available bad news on earnings in one go) in the subsequent recession, leading earnings and profits to realign.

The tax cuts and share buybacks explain around 10 percentage points of the widening of the gap this year. In addition, S&P 500 earnings tend to be more cyclical and benefit from the higher prices of inventories and assets towards the end of prolonged bull markets. 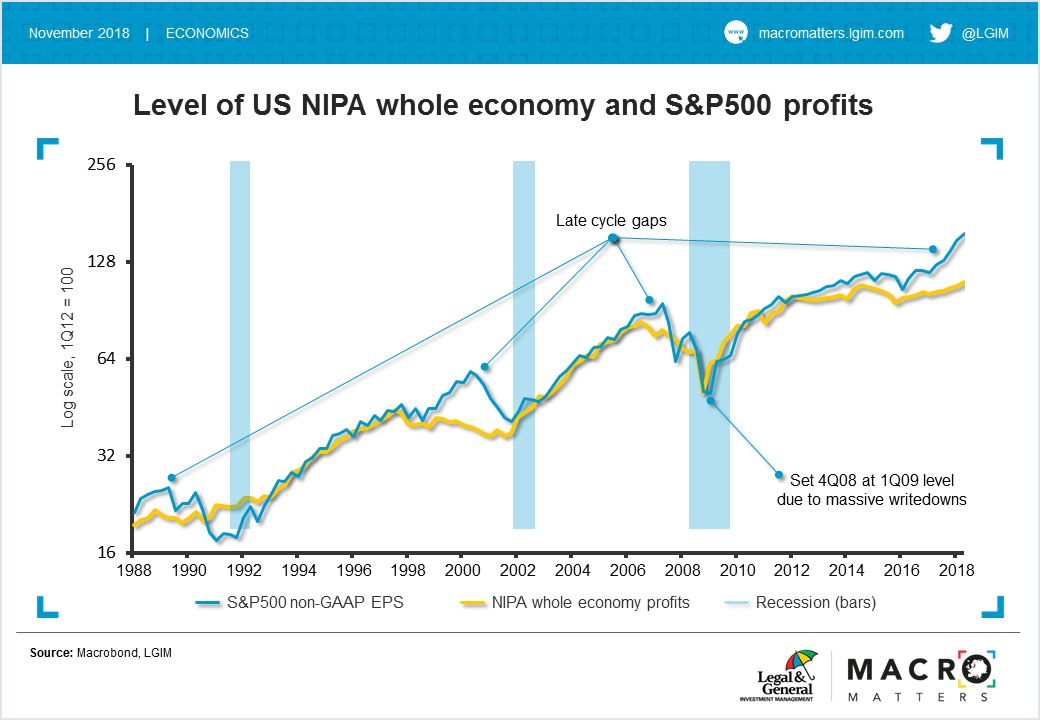 In the second half of next year, as the fiscal stimulus fades and growth slows, margins should come under renewed strain, especially as labour cost pressures are likely to build further. Some increase in pricing power and inflation is unlikely to be sufficient to offset rising costs, in our view.

Even if the Fed manages to achieve a soft landing in 2020, it is becoming increasingly difficult to avoid an earnings recession

The latter stages of the economic cycle present a challenge for the Fed as it needs to continue gradually hiking through 2019 in an attempt to prevent overheating. Even if the Fed manages to achieve a soft landing in 2020 (which we would define as US GDP growth of 1%), it is becoming increasingly difficult to avoid an earnings recession. With relatively sticky costs, the models find that it is the change in growth which drives the profits cycle. In addition, this sets up the risk of a self-reinforcing downturn.

Higher interest rates and lower profits could lead to asset price weakness, a wider financing gap, tighter lending conditions and increased stress in a leveraged US corporate sector. This is why we are worried that a slowdown could morph into recession in 2020, which would lead to an even larger decline in profits. 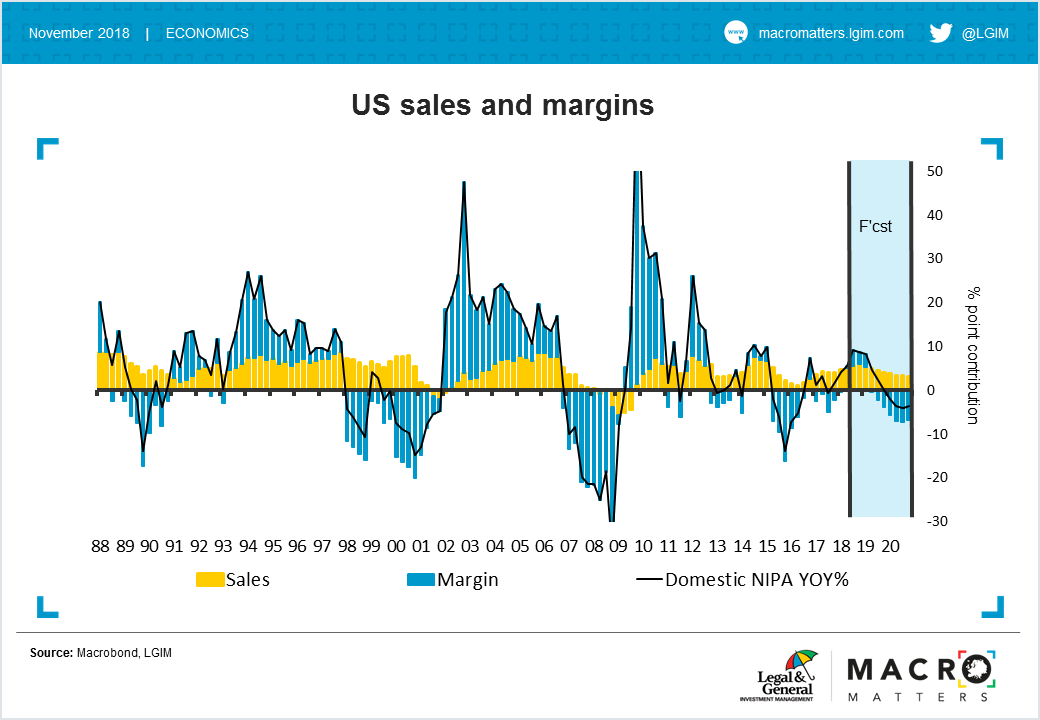 How can this negative spiral be averted? It could be delayed by extended strong growth and more fiscal stimulus, but this sets up the risk of an even bigger bust. A surprise immediate growth slowdown would at least prevent more severe overheating and allow the Fed to stop hiking earlier. Decent growth outside the US and a weaker dollar would help. But we believe the only long-term solution is much stronger labour supply and productivity to contain unit labour costs and raise potential growth.