Is it finally the time for value to shine?

Value stocks may be facing a ‘now or never’ moment.

Many investors, pondering the relative performance of investment factors in recent years, will probably have asked at some point: “Is it time to go long value?”

Value stocks, which trade at low prices relative to their fundamentals, have indeed underperformed by so much – and for so long – that they have long appeared to be due a bounce. But the correct answer would almost always have been simply “no”.

Now, though, we believe the answer should be far less emphatic, as a key element that could trigger a rally in value is changing, even if only on a temporary basis. Indeed, this has prompted us to rephrase the original question: “If not now, when?”

Value stocks have been terrible relative performers pretty consistently since 2006; they currently trade at around 20-year lows versus the wider market. Value has now underperformed during the last two bear markets, the long bull market in between and has not outperformed in the sharp market rebound since late March.

Perhaps unsurprising given the poor performance, value stocks are located in a very unpopular part of the market, pricing in very little of the optimism that Emiel cites in our latest Asset Allocation outlook.

Relative valuations have fallen a long way: whether you look at price-to-earnings or price-to-book ratios, or dividend yields, most such metrics are at or near long-term extremes. At the same time, sentiment data mirror the valuation discount, with investor surveys consistently highlighting value near the bottom of the popularity rankings. 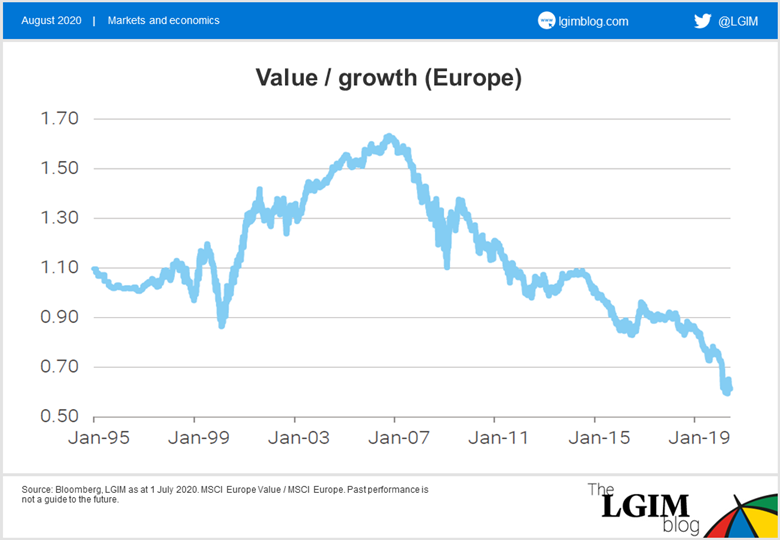 All of the above (and more) have been valid for a long time, even as value has continued to lag the broader market. What is new is that we believe the macro backdrop for value is likely to look more favourable in the months ahead than it has in many years.

High-frequency cycle data have already started to improve, with the countries emerging from lockdowns and the global economy recovering from recession, albeit only fitfully and to below their pre-crisis levels of activity. Improving PMIs have tended to be good news for value.

A word of caution, though. If the market and economy have much further to fall, then it’s too early for value and the lack of outperformance during the recovery makes sense because it was only a bear-market rally. And even if the cyclical outlook for value improves, we expect the structural headwinds of a low-growth, low-inflation and low-bond yield environment over the medium term to remain.

As a result, we see potential opportunities in value stocks as more tactical than structural.