How bad is the next bear market?

While you’re in it, there is no such thing as a mild bear market. But if the next recession plays out as Tim suggests, the accompanying bear market should be much less severe than the past two.

If you know only one rule of thumb for equities, it should be that recessions trigger bear markets. The chart below shows that of the past 14 recessions, 11 were accompanied by a bear market. Another two were preceded by significant drawdowns just under the arbitrary 20% cut-off for a bear market. That is an almost perfect track record. 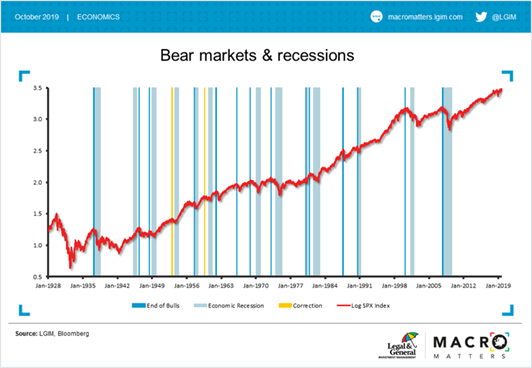 Add on top of that the likelihood of selling at lower prices, and you have a recipe for negative revenue growth. With a large proportion of the cost base fixed (e.g. factories, sticky wage levels, etc.), a moderate drop in revenues can turn into a much larger decline in profits. 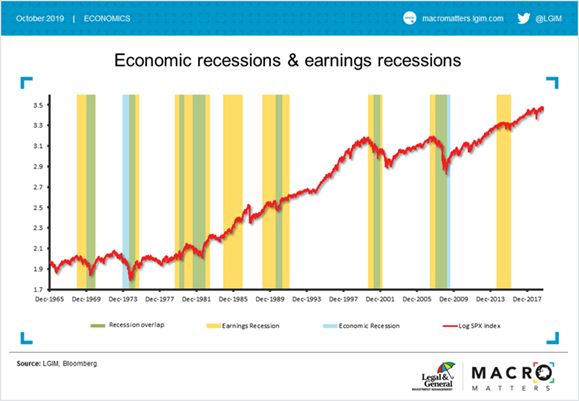 With this in mind, Tim’s scenario of a mild recession suggests an unusually mild earnings recession. Sales-weighted GDP growth would dip, but remain in positive territory. Given the lack of a boom before the recession, the slowdown of growth should be much less severe than in previous recessions too. In fact, our macro earnings model suggests that US profits would fall by less than 20% in a mild recession scenario. While still a painful experience for companies and investors, it would not even register in the top 20 such episodes on record.

The peak-to-trough earnings decline is a good starting point when thinking about the severity of a bear market, and we also find that valuations matter. Bear markets which started with higher price-to-earnings ratios have tended to deliver greater drawdowns, as a de-rating amplifies the earnings decline.

‘Hidden’ corporate vulnerability can also lead to the earnings drop being more severe than the economic downturn would suggest. 2001 was a good example of this, when huge goodwill write-downs after the M&A binge came on top of more moderate operating earnings weakness.

Finally, the shape of the expected post-recession recovery influences how equity investors respond to an earnings recession. Expectations of a V-shaped rebound after a cyclical downturn require a smaller discount than expectations of a longer-lasting or structural slowdown resulting in a U or L-shaped economic recovery.

The good news is that on most of the above counts the current equity market looks ‘OK’. The current price-to-earnings ratio is close to the historical average of bull-market peaks in the US, and lower in most other regions. Furthermore, we have not had a wave of corporate excess that tends to build up hidden vulnerabilities.

So, while there is no such thing as a painless bear market, for the time being we seem to be missing many of the ingredients that would turn a normal bear market into an extreme one like 2001 and 2008. A 20% drawdown would qualify as a bear market and would be roughly consistent with the recession scenario Tim has painted.