Coming soon to the silver screen

Despite the rise of original content from Netflix, alongside a migration of the talent pool, there is little evidence to suggest this will inevitably lead to the demise of cinema. Global box office revenues have largely proved resilient, while in case you missed it, recent global box office success for the new Avengers film demonstrates cinema’s enduring appeal.

SVOD has matured into a viable distribution model that complements, not replaces the cinema experience

Technology has clearly evolved since my first visit to the local picturehouse. Sound and image quality has improved considerably, seats can now recline and binge-watching at home is rife. Meanwhile, the cinema industry now relies more heavily on the success of FX heavy blockbusters and comic-book franchises. The art of storytelling and place-making is by no means lost, but the industry is clearly having to evolve to an ever changing consumer.

Driven by this change, SVOD has matured into a viable alternative distribution model. That being said, for all the concern over disruption, analysis suggests the viewing platform complements, not replaces the cinema experience. While Netflix is able to raise prices and gain subscribers at the same time, there are also a number of positive industry dynamics in play for the traditional cinema industry. Encouragingly, we are seeing positive trends in ticket price growth, alongside incremental revenue from ancillary services such as online pre-booking. Talk of the threats posed by SVOD seems overplayed, given the use of reward programmes liked ‘Unlimited’ from Cineworld, which helps provide revenue visibility on the back of high loyalty levels. 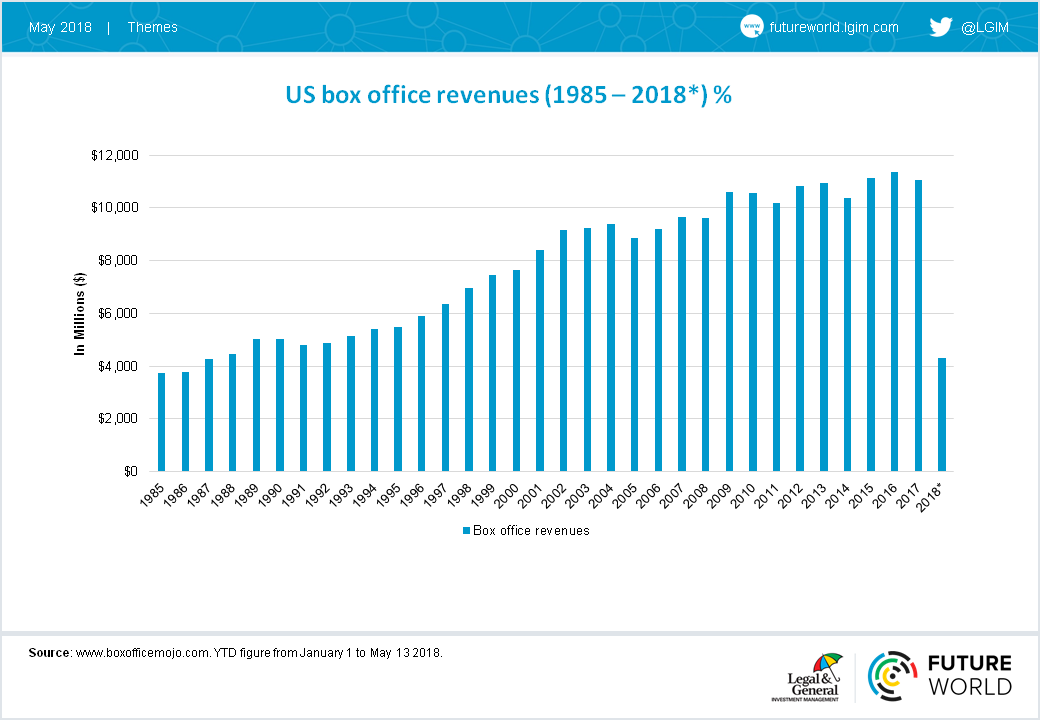 Arguably, the biggest challenge for cinema comes from investment in the technology itself. As more innovation appears, the renovation of sites requires sizeable capex commitment. Innovation will be heralded by new ways to watch film (laser projection, direct view LED) and greater focus on improving the overall cinema experience. For example, IMAX and 4D screens are growing in popularity, while the use of virtual and augmented reality can help deliver a premium offering. More bespoke cinema experiences will likely soon become the norm, potentially using the Secret Cinema template. Immersive experiences have taken the market by storm in recent years, creating large-scale productions that merge the boundaries between performer and audience.

As outlined above, this is what makes Cineworld’s acquisition of Regal Entertainment - the second largest cinema chain in the US - all the more interesting. Initial market reaction to last year’s announcement was categorically negative. Investors were concerned by the sheer scale of the deal, alongside structural fears of declining US box office admissions. However, fast forward six months, and the market has a greater degree of confidence in the investment rationale.

Helped by the recent Marvel film franchise success, investors are now more optimistic. Operational synergy targets look both credible and deliverable, while the potential revenue uplift from refurbishing the Regal estate represents an attractive growth opportunity. Management have made their ambition clear and expressed confidence that site refurbishment can drive desirability of the experience, which should help arrest the trend of modestly declining US admissions.

Admittedly, the success of this investment is uncertain, with returns on extensive refurbishments unproven in the US market. However, Cineworld have already successfully demonstrated the merits of this model in the mature UK market, where it has achieved returns on invested capital in excess of 20%. Although there is execution risk, we see logic in the strategy to upgrade food & beverage areas (to drive improved retail spend per admission) and roll-out tech innovation (screen size, sound, seats). Combined, these factors should help generate improved premium screen mix and help ensure that the silver screen remains the home of film.

For investors, it could also provide a ticket to growth.